The tuatara is an amniote[1] of the family Sphenodontidae,[2] native to and found only in New Zealand. The two species of tuatara are the only surviving members of the Sphenodontidae. Although tuatara are related to lizards and snakes, tuatara are neither lizards nor snakes. 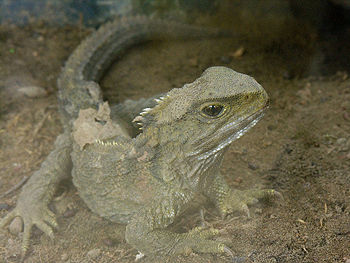 Unlike lizards, the tuatara does not have an external tympanum, femoral pores (series of small openings which some lizards have on the underside of the thighs), and paired evertible hemipenes which are characteristics of lizards. Tuatara posses cranial characteristics of the Rhynchocephalian order of reptiles including an enlarged tooth row along the maxillary side of the palatine bone and lack a splenial bone.[3]

As the only living descendent of the order of reptiles known as Rhynchocephalia, tuatara are a focus of research in evolutionary processes and theoretical reconstruction of habitat, appearance and life of the earliest diapsids [4] that thrived millions of years ago .

Tuatara are distinct from all other modern day reptiles. Rhynchocephalians were a much more diverse and numerous order of reptiles during the Triassic period, 251 to 200 million years ago. With the exception of the tuatara, the entire order probably became extinct approximately 60 million years ago during the late Cretaceous period.

The tuatara has been called a living fossil in error. It is very similar to extinct ancestors but it has developed unique features as a modern species. Comparable to dinosaurs, it has a diapsid skull and other anatomical features shared with prehistoric reptilians.