From Citizendium
(Redirected from Torkham)
Jump to navigation Jump to search

Towr Kham is a border crossing town from Nangarhar Province, Afghanistan, to Pakistan. is a city on the border between Afghanistan and Pakistan in the Khyber Pass. It is also called Torkham or Turkham. 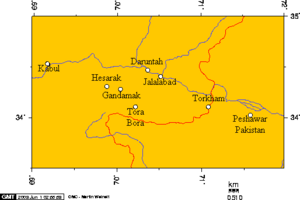 Highway 1 connects Towr Kham to Kabul via the Ring Road; it also goes to the Towr Kham border crossing with Pakistan. [1] The Pakistani side of the border is in the Khyber Agency of the Federally Administered Tribal Area.

In November 2001 the New York Times reported that Towr Kham was the home of Hazrati Ali, an anti-Taliban militia leader who seized power after the Taliban retreated. He had joined forces with two other militia leaders, Mawlawi Yunis Khalis, and Ezatullah, to set up a regional provisional government.[2]

American forces staff the nearby Towr Kham Fire Base.[3] In April 2006 the Afghan Border Police announced that they would start requiring travelers crossing the border at Towr Kham to possess valid travel documents.[4]