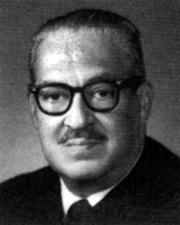 Thurgood Marshall (1908-1993) was an American jurist who served as an Associate Justice of the U.S. Supreme Court from 1967 to 1991. Marshall was born in Baltimore, Maryland. He was nominated to the court by President Lyndon B. Johnson and was the first African-American to serve in America's highest court.

Prior to his tenure on the Supreme Court, he served as an attorney for the National Association for the Advancement of Colored People (NAACP), during which he argued on behalf of NAACP in several landmark Civil Rights cases. In 1961, he was appointed circuit judge on the Second Circuit by President John F. Kennedy and served until 1965. He was the Solicitor General (U.S.) under Lyndon B. Johnson from 1965 to 1967, when he was elevated to the Supreme Court.

Marshall retired from the court in 1991. President George H. W. Bush nominated Clarence Thomas, also an African-American but much more conservative than Marshall, as his successor. In 1993, Marshall died in Bethesda, Maryland. 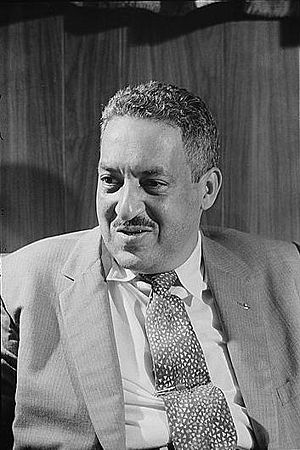 Marshall as an NAACP attorney in 1957,

During his career in NAACP, he had argued numerous cases before the Supreme Court, including Chambers v. Florida, which ruled confessions obtained by the police by duress were inadmissible in court, Smith v. Allwright, which invalidated "white primaries" in elections, and the most importantly, Brown v. Board of Education, the landmark 1954 case that overruled Plessy v. Ferguson and declared segregations in schools unconstitutional.

The Brown case was a decisive moment in American jurisprudence that it thoroughly denounced the doctrine of the "separate but equal" and helped the launching of the Civil Rights Movement of the 1960s.

On the Supreme Court, Justice Marshall was generally a liberal. He consistently supported individual rights against government intrusion and equality for the minorities. He maintained his liberal stance even after the court was increasingly shifting conservative in his later career.

Marshall supported strong procedural safeguard for criminal defendants. He was the author of Benton v. Maryland, a case that ruled the Fifth Amendment protection against double jeopardy was incorporated to the individual states by the Fourteenth Amendment. He also categorically opposed capital punishment. In 1972, he concurred the ruling of Furman v. Georgia, which halted the practice of death penalty nationwide. When the court ruled in the 1976 case Gregg v. Georgia reinstating the death penalty, Marshall authored a dissenting opinion.

Marshall was generally supportive of noneconomic application of substantive due process. He joined the majority in Roe v. Wade, using the substantive due process protection of "right to privacy" to justify the "right" to abortion. He was a dissenter in Bowers v. Hardwick, a case that upheld a Georgia law against sodomy.