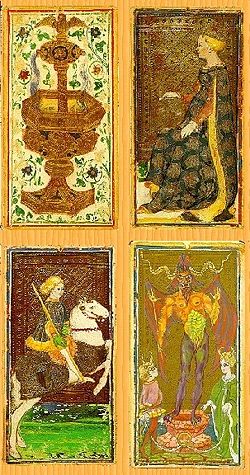 The Visconti-Sforza Tarot with a 20th century reproduction of the Devil card not found in the 15th century original game.

The Tarot (first known as Tarocchi also tarock and similar names) is a deck of seventy-eight cards, which from the middle of the fifteenth century was played in various parts of Europe. In Italy, for example as Tarocchini and in France as French tarot.

A Tarot deck has four colors corresponding to the four colors of the modern 52-card deck, although the symbols of the trumps and the number of court cards may vary. Compared to a standard card deck it distinguishes itself in particular by a separate trump known as the Fool which in some versions of the game can be played out as the highest trump. Rabelais mentions "tarau" as the name of one of the games played by Gargantua in his Gargantua and Pantagruel.[1] This is probably the first time the French name for Tarot emerges. In a large part of Europe Tarot cards are used as a card game, for amusement only. In English speaking countries these kind of games are practically unknown and Tarot is used there mainly for divination and other esoteric applications. Occultists call the set of trumps (together with the Fool) the "Major Arcana", while the ten numbered cards and court cards of each color are called the "Minor arcana". Although some occult writers traced the origins of Tarot cards back to ancient Egypt or the Kabbalah no evidence is found for these speculations, nor can it be proved that prior to the 18th century Tarot has been used for divination purposes. It seems very likely though that the vivid scenes depicted in the Tarot could have inspired its use for predicting the future.[2]