Tactical land movement covers a range of formations and techniques used by ground combat forces, which depend on whether efficient movement, security, or combat is the priority. Units change formations at various phase lines (PL)

Movement and maneuver are different things. Maneuver is a more complex tactical exercise intended to cause the enemy to act in ways most advantageous to one's own forces, and is specific to individual battlefield situations. Movement techniques are standard operating procedures.[1] "Fire and maneuver" are complementary concepts; GEN George Patton spoke of "holding the enemy by the nose with fire while kicking him in the rear with maneuver." Covering fire deprives an enemy unit, being fired upon, of the opportunity to maneuver.

Even in a relatively safe situation, command and control elements should be distributed in the formation, so a single less-than-catastrophic attack will not leave the unit leaderless. 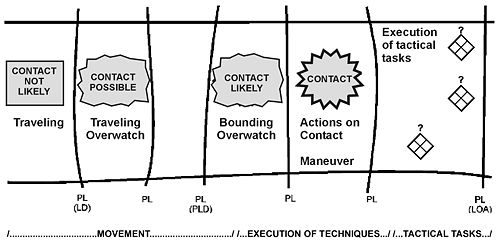 At any time, the overwatch element is not limited to its own firepower, but, if the assets are available, can call in air and artillery strikes under the appropriate doctrine of controlling close support to ground forces.

In a traveling movement, all components of the unit move at once. Enemy contact is considered unlikely. An infantry unit leads, followed by the commander; the trailing unit is usually also infantry, with the deputy commander just ahead of it.

When speed is important but there is a possibility of enemy contact, the traveling overwatch technique is appropriate. The unit is split into lead and trail elements, which must stay in constant visual or electronic contact. While the lead element moves continuously, the trail element moves at various speeds, and may stop so it can best cover the lead element in situations where contact is considered very likely.

Covering means that the trail element is ready to provide immediate suppressive fire on the enemy, giving the lead unit the opportunity to maneuver. To prepare to cover, it may have to ready crew-served weapons such as mortars and machine guns, or put teams using laser designators in good observation points.

Overall, this is a flexible formation. When contact is especially likely, the unit should shift into bounding overwatch.

Trading security for speed, bounding overwatch is the appropriate formation for movement when contact is likely, although it is not the same as a deliberate attack. As with traveling overwatch, the unit splits into two elements, but the elements constantly exchange duty.

In the two variants, alternate or successive bounds, one element takes the overwatch (i.e., fire) role, with specific geographic sectors to watch and cover, while the bounding element moves with as much cover and concealment as possible.

Alternate bounding is faster but less secure. An element takes the lead, moves forward, and takes an overwatch position for the area ahead. The now-trail element moves continuously, past the stopped overwatch element. There is possibility for friction as the moving element passes the overwatching element.

Actions on contact very much depend on the enemy's awareness of the friendly force. If, for example, the lead element encounters an ambush, standard counter-ambush doctrine is followed, with modifications for the existence of the overwatch element. The lead element moves, at high speed, into the ambush, while supporting fires pin the ambush force, especially in the rear. Any enemy heavy weapons or command posts will be the priority of the overwatch force.

If the bounding force discovers the enemy but remains undiscovered, the tactical commander will need to decide whether the mass of the entire unit hitting at once is desirable; if one or both units should fire, at a distance, before advancing; or if the lead unit should advance under covering fire. The commander may even decide that it is wise to withdraw and avoid contact, a perfectly reasonable thing to do if the unit is primarily moving in a reconnaissance role.