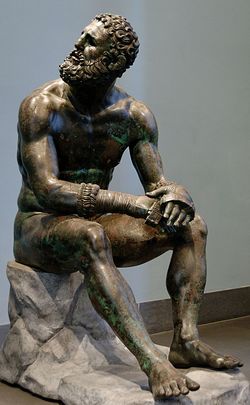 This article presents a chronology of sporting development and events from time immemorial until the end of the 10th century CE. The major sporting event of the ancient Greek and Roman periods was the original Ancient Olympic Games, which were held every four years at Olympia for over a thousand years. Gladiatorial contests and chariot racing were massively popular. Some modern sports such as archery, athletics, boxing, football, horse racing and wrestling can directly trace their origins back to this period while later sports like cricket and golf trace their evolution from basic activities such as hitting a stone with a stick.

There are many modern games which call upon the basic action of hitting a ball or stone with some kind of club or stick. These include baseball, cricket, croquet, golf, all forms of hockey, rounders and all forms of tennis. It can be argued that these sports share a common origin which dates back to time immemorial and, as such, can never be found.[1]