A rotorcraft is a heavier-than-air flying machine that uses lift generated by wings, called rotor blades, that revolve around a mast. Several rotor blades mounted to a single mast is referred to as a rotor. Rotorcraft may also include the use of static lifting surfaces, but the primary distinguishing feature being lift provided by one or more rotors. Rotorcraft include helicopters, autogyros, gyrodynes and tiltrotors. In the United States, the Federal Aviation Administration places helicopters, autogyros (which it calls gyroplanes), and gyrodynes in the category Rotorcraft, and tiltrotors in the category Powered lift.

A helicopter is a rotorcraft whose rotors are driven by the engine(s) throughout the flight, to allow the helicopter to take off vertically, hover, fly forwards, backwards and laterally, as well as to land vertically. Helicopters have several different configurations of one or more main rotors.

Helicopters with one driven main rotor require some sort of antitorque device such as a tail rotor, fantail, or NOTAR, except some rare examples of helicopters using tip jet propulsion which generates almost no torque. 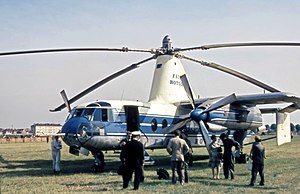 Unlike a helicopter, the rotor of an autogyro (sometimes called gyrocopter or gyroplane) is driven by aerodynamic forces alone, and thrust is provided by an engine-powered propeller similar to that of a fixed-wing aircraft.

A Gyrodyne is a rotorcraft with a rotor system that is normally driven by its engine for takeoff, hovering and landing like a helicopter, but which also has an additional propulsion system that is independent of the rotor system. At higher speeds, the rotor system acts similar to that of an autogyro, no longer driving the aircraft but simply providing lift. A technology proposal by Carter Copter Technologies, as well as a research project funded by DARPA both refer to gyrodyne-type concepts as heliplanes.

Various kinds of hybrid between rotary and fixed-wing aircraft have been created: 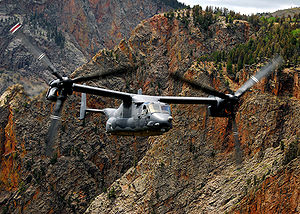 There are also examples of hybrids between a helicopter and an airship:

A rotary wing is characterised by the number of blades. Typically this is between two and six.

A rotorcraft may have one or more rotors. Various rotor configurations have been used:

Where a rotorcraft has two or more rotors, the rotor discs may be arranged to pass through each other. The blades of the two rotors must be synchronised so that they intermesh without touching each other.

In a ducted rotor design, the rotor is surrounded by a large ring-shaped duct, to reduce tip losses. Typically, the rotor swings forward to act as a propeller in forward flight, and the duct is designed to act as a fixed wing in this mode. However the only aircraft of this design to fly, the SNECMA Coleopter, only ever flew in rotorcraft mode.

The difference between a ducted rotor and a ducted fan design (which is not a rotorcraft) is that when the rotor is stationary you can see through the rotor disc.