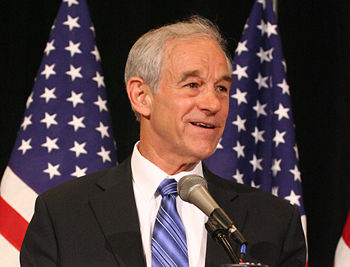 While Paul is a current member of the Republican Party, and has been elected as such to his congressional seats, Paul is noted for his libertarian philosophies, and was the nominee of the Libertarian Party's for President of the United States in the 1988 election, where he placed third.

After much speculation that he would consider seeking the Republican nomination in the 2008 election, Paul started an exploratory committee on January 12, 2007 and formally announced his intent to seek the nomination on March 12, 2007, during an episode of C-SPAN's Washington Journal.

Paul holds the record for the most money raised in a one-day fundraiser, taking in over US$6 million on December 16, 2007, the 234th anniversary of the Boston Tea Party.[1]

His son, Rand (named for the libertarian author, Ayn Rand) won the 2010 election for U.S. Senate from Kentucky.

Paul holds broadly libertarian beliefs: lower taxes[2], strong support for the Second Amendment and against bans or regulations on gun ownership[3], against the Real ID Act, the USA PATRIOT Act and government surveillance and invasion of privacy[4].

He is also "strongly pro life", believing that life "begins at conception"[5]

Paul supports stronger border and immigration control including the building of a wall on the U.S.-Mexican border[6].

Many of his foreign policy positions, about which he has contributed to AntiWar.com, come from the paleoconservative faction of American Conservatism. Paul is in favor of immediate withdrawal from Iraq[7][8].

Paul's 2008 Republican presidential bid has been broadly welcomed by libertarians and more traditionalist conservatives alike, although both have expressed concern about some of his positions. Libertarians, for instance, found Paul's positions on border control and his vote for price negotiations for Medicare prescription drugs[9].

Others have found Paul's relationship with the extreme wing of the Right, including the publication of racist views in political newsletters published under Ron Paul's name[11][12]. Paul's statements on evolution and science education also led some to see him as being a risky choice for secularists and anti-war liberals, and possibly being a closet Christian Dominionist[13][14].