Robotic surgery is surgery that uses robotic devices as tools for surgeons during the procedure. Different categories of robotic surgery include supervisory controlled system, shared controlled system, and telesurgical system. Telesurgical systems, when the surgeon directly manipulates the robot during the procedure, are used in laparoscopic surgery. Robotics has developed extensively in minimally invasive surgeries (MIS), such as laparoscopic surgery, because of the specific need for increased visibility and mobility in this type of procedure. Telesurgical robots are developed that allow surgeons more precise access to the patient’s entry site as well as nearby organs and tissues. Surgical robots have been more widely used after the commercial release of the da Vinci robotic system, a leader in first generation surgical robots, in 2000. 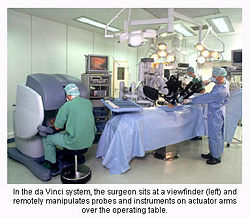 The da Vinci being used in a clinical setting

December 1993: The Aesop 1000, a device holding a telescopic camera during MIS was approved by the Food and Drug Administration (FDA).
1997- The da Vinci Surgical System created by Intuitive Surgical Inc was approved by the FDA to help in laparoscopic procedures.
1997- The da Vinci System is used to perform a teleoperated gallbladder surgery in Brussels, Belgium by Jacques Himpens and Guy Cardier.
March 7, 2000- Intuitive Surgical Inc and Computer motion Inc merged [1].
July 11, 2000- The da Vinci system is approved for marketing in the U.S for laparoscopic Surgery
August 2001- The CyberKnife® an image guided robot, received clearance for cancer surgery.
October 9, 2001- ZEUS® Robotic Surgical System is approved by the U.S for laparoscopic procedures.
April 9, 2005- Surgeons at the University of Illinois medical center successfully remove 60% of a patient’s liver using the da Vinci System.
2007-University of Washington developed the Raven Robot
October 11, 2009- CoBRASurge is unveiled in IEEE conference

How Robots are used in surgery

Teleoperated robots are used in laparoscopic surgery to increase visual ability for surgeons. This is done by using a small video camera on an arm which goes into the incision. The images recorded of the inside of the patient’s body is projected onto an HD screen that allows the surgeon extensive visual information without making multiple incisions. [2] This method of visualization is demonstrated in the CoBRASurge robotic system which contains a computer screen interface that is located outside of the surgical theater. This interface consists of two Novint Falcon controllers manufactured by Novint Technologies, a foot pedal, and a video display. [3] These controllers are extensions of the surgeon’s hands, with the joints of the robotic arm correlating to the grip on the controller. Type of robotic manipulation are categorized into teleoperated masters and instrument manipulation. Teleoperated masters are controlled by matching the movement of the surgeons hand to the movement of the arm. Instrument manipulation is when the instrument moves according to specific commands pre-programmed by the surgeon. The da Vinci robot works similarly to the CoBRASurge model with a three part system. It contains a surgeon console where the surgeon sits, removed from the robot and patient, the patient side cart containing arms and tools, and detachable tools that can be added to the cart to maximize efficiency [1]. Laparoscopic robots also contain many surgical instruments on several different arms that can make and close incisions with greater accuracy than a human.[4] For example, tools can be specialized and put onto arms that can be controlled by the surgeon to extract unwanted masses through a single incision. The Alexis wound retractor can be added to the da Vinci platform to allow for extraction of specimens that would otherwise be difficult to retrieve without another incision.[5]

Disadvantages of the da Vinci Robot

Application of the da Vinci robot in clinical settings reveal improvements that need to be made in future robotic models. Many moving joints, gears, and parts make the da Vinci robot hard to sterilize properly. This is because the construction model for surgical robots is based off of industrial robot design. To meet sterilization needs, robots need to be constructed in a way that minimizes surfaces that need sterilization. The cost and size of the robots are concerning. The da Vinci robot is very large (many are greater then 1 m[6]) and costs about 1 million dollars per unit. Also according to the American Journal of Surgery, 75% of surgeons reported feeling fiscally limited by a robot that is more then $500,000.

Another factor that unnerves surgeons is the learning curve, or time it takes for surgeons to become experts at using the devices. It takes between 100 and 150 cases before a surgeon is labeled experienced at operating the teleoperated robot. Increased risk of site infection has been associated with surgeons performing procedures during this learning curve [7].

Other robotic systems have been recently developed that improve on the older da Vinci model. The CoBRASurge robotic system is a bevel geared robot that is compact yet maintains precision with four degrees of freedom.[8] Another advantage of the CoBRASurge robot is that it is easily moveable from one area to another without completely disassembling the robot. This mobility creates greater flexibility during the procedure. The CoBRASurge, along with other robots listed below, are only templates and research projects, not commercially available machines. Another robot being designed is the RAVEN created by Biogenics lab. This robot is lightweight (only 50 pounds) and is in the advanced stages of development. It uses kinematic expression and seven degrees of freedom making it very mobile. Also the RAVEN makes strides in flexibility within different networks as well as in extreme conditions [9]. Currently NASA is teaming with Biogenics to test the RAVEN in extreme conditions.[10] Many of the newer robots try to reduce crowding in the operating room by limiting the size of these machines. Another important disadvantage that is addressed in more recent robotic models is the ability for the surgeon to feel resistance applied to the tips of the tools from tissues.