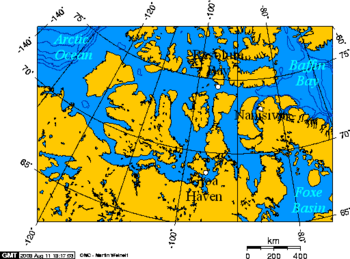 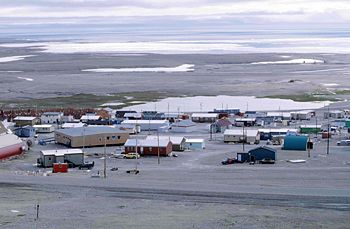 Resolute Bay is a community of about 250 individuals on Cornwallis Island, in Nunavut, near the eastern entrance to the Northwest Passage.[1][2] Canadian Armed Forces plans to build a training centre for surface forces there, as a companion to the Naval Base at Nanisivik.

Canada asserts that the Northwest Passage is an internal passage, while the United States position is that the passage should be considered an International shipping channel.[3]</ref>[4] The different interpretations have significant consequences for protecting the fragile Arctic environment. The amount of ice coverage of the Northwest Passage is undergoing a very significant reduction. This reduction is ice is often cited as one of the few positive effects of global warming, because the route between Europe and Asia across the pole is shorter than that through the Panama Canal. The Canadian government argues that as internal waters it would have the right and responsibility to inspect and regulate International shipping through the Northwest Passage, in order to enforce environmental safety measures.

Like Grise Fiord the Canadian Government encouraged Inuit families to relocate to Resolute Bay as a sovereignty demonstration in the early 1950s.[2]

In order to prepare to enforce environmental safety measures the Canadian government is building new Arctic bases, including a surface warfare training base at Resolute Bay.[1][3][4]

When American oil interests tried to force the S.S. Manhattan, an ice-strengthened super-tanker through the Northwest Passage in 1968 hunters from Resolute Bay tried to block its passage.[3]