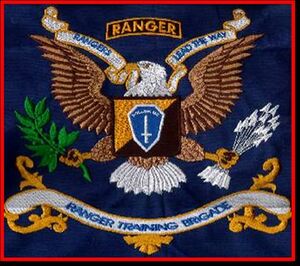 The United States Army Ranger School is an extremely demanding, and prestigious, school in infantry tactics and small unit leadership. A substantial number of the candidates do not complete it, and even completing it may not result in qualifying for the "Ranger Tab" badge. Headquartered at Fort Benning, Georgia, it is sometimes jokingly called the "Benning School for Boys", although it is the antithesis of child's play.

One does not need to complete Ranger School as a prerequisite for assignment to the 75th Ranger Regiment, and, indeed, most junior soldiers assigned there go through an abbreviated Ranger Indoctrination Program.

It is an important milestone for combat arms officers and noncommissioned officers; United States Military Academy cadets sometimes attempt it in the summer between their junior and senior years. While the majority of places are reserved for combat arms, soldiers from certain combat support branches, such as military intelligence, may go through it, and, if they succeed, obtain considerable credibility with combat soldiers.

Even among combat troops, it both adds skills and confidence to the soldier, and also can resolve doubts about officers thought to be "staff", "politicians", or "intellectuals". GEN David Petraeus was suspect, to some "old Army" officers due to his doctorate from Princeton, but the fact that he was the only man ever to be first in his class at both the Ranger School and Command and General Staff College overcame many doubts.

As much as any specific skill, the School is intended to help successful candidates find reserves within themselves. The instructional model is crawl-walk-run; while the motto "The only easy day was yesterday" comes from the United States Navy SEALs, it is apropos here. Ranger School never gets easier. 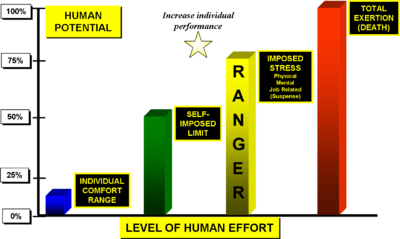 While some Ranger techniques literally go back to Rogers' Rangers in the French and Indian War, there is specific training in advanced infantry techniques that are used in current combat situations: 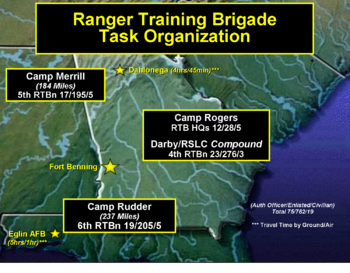 The full course lasts for 61 days, during which candidates carry 65 to 90 pounds of equipment on 2200 calories per day. In some phases, they must get food from the land. They carry out over 200 miles of combat movements, on foot, with 0 to 5 hours of sleep per night, with peer and cadre evaluations.

The "crawl" phase begins in forest at Camp Darby, but "walk" is in mountainous terrain at Camp Merrill; most of the entries are by parachute jump. "Run" moves to jungle at Camp Rudder at Eglin Air Force Base, Florida, including airborne, air assault, small boat, and dismounted combat patrol operations in a low intensity combat environment against a well trained, sophisticated enemy.

They will have 2-4 years as a small unit leader and undergo a 3-6 month certification process. Their background should indicate that Ranger School, as difficult as it may be, is a midpoint in professional development.

As demanding as Ranger School may be, it is considered preparation for some of the special operations selection courses, as for Delta Force. United States Army Special Forces selection has some of the physical demands, but also has intense intellectual demands in operating in a simulated behind-the-lines guerrilla role.