Another intelligence collection aircraft variation of the basic C-135 platform, a military variant of the Boeing 707 commercial transport aircraft, the RC-135U COMBAT SENT is optimized for collection of electronic intelligence (ELINT) on advanced radars. While the RC-135 V/W RIVET JOINT has ELINT capability, RIVET JOINT is more targeted on communications intelligence (COMINT) than ELINT. Systems aboard the aircraft include both advanced target selection software and specialized radar signal collection. It may also collect incidental measurement and signature intelligence (MASINT) from the targets; ELINT proper analyzes the deliberate signal while MASINT looks at unintentional radiation. 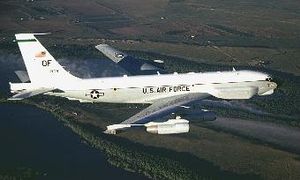 The United States Air Force has two COMBAT SENT aircraft, part of the United States Strategic Command in joint intelligence, surveillance and reconnaissance (ISR) missions with the Defense Intelligence Agency (DIA). They are operated by the 55th Wing at Offutt AFB, Nebraska.[1] It was among the most advanced intelligence aircraft used during the Vietnam War, collecting information on North Vietnamese radar.

Collecting ELINT tends to be more time-critical than collecting COMINT, especially when the communications in question are conversations at human speed. ELINT targets include radars at multiple sites, which turn on and off at short intervals, and operate on different frequencies. The Expert Mission Manager software of the RC-135S contains extensive, national-level (e.g., DIA and the National Security Agency (NSA)) This software allows identifying and prioritizing signals to intercept at faster than human speed, recommends the best aircraft position and course for interception, and the best sensors to use. [2]

Antennas and associated analysis improve the collection of information on "power, (beam) pattern, and polarization (P3)" of radar signals designed to be hard to intercept, with a wider field of view and greater sensitivity than previous signal capture systems. The systeem may use cueing from other intercept platforms (e.g., aircraft, satellites, etc.) that have better intercept geometry, or perhaps use other methods of recognizing the existence of a signal, such as COMINT from its human operators.

The FHRS uses distributed antennas and processing facilities to improve ELINT for frequency-agile, low-probability-of-intercept, and other difficult to process radar.

In its Vietnam-era configuration, the COMBAT SENT had a side-looking imaging radar.[3]

The infrared countermeasures was not limited to flares, but directed energy from the AN/ALQ-157 system.[4] The aircraft has an AN/ALE-47 Countermeasures Dispenser System [CMDS], is a "smart" dispenser that connects directly to infrared and radar warning receivers, release expendable and towed/retrievable decoys, as well as helping the pilot with situational awareness of the threat.