This article is about the Taliban leadership council. For other uses of the term Quetta, please see Quetta (disambiguation).

After the Afghan Taliban leadership council (shura) was driven from Kandahar in the Afghanistan War (2001-), major combat phase, it is widely accepted to have found sanctuary in Quetta, Pakistan, in Balochistan Province. Recent reports suggest some of its leaders may have moved to Karachi.

It is still led by Mullah Omar; his role with respect to native Pakistani Taliban is not clear. There have been statements by Pakistani Taliban that they accept Omar's overall guidance, but some, especially of the Mehsud tribe, seem to be taking an increasingly independent stance. Baitullah Mehsud and several successors have been killed in U.S. drone strikes in Pakistan, principally in the northern and eastern parts of Pakistan rather than Balochistan.

On 24 February 2010, the Christian Science Monitor reported that Pakistani sources said they recently arrested half the members of the shura's Supreme Council. Additional members mentioned include Mullah Abdul Qayoum Zakir, who oversees the movement’s military affairs, Mullah Muhammad Hassan, Mullah Ahmed Jan Akhunzada, and Mullah Abdul Raouf.[1] Bill Roggio of the Long War Journal wrote that the source was the Pakistani domestic intelligence bureau, and has not been confirmed by U.S. sources; he said the list given would not be as much as half of the shura.[2] 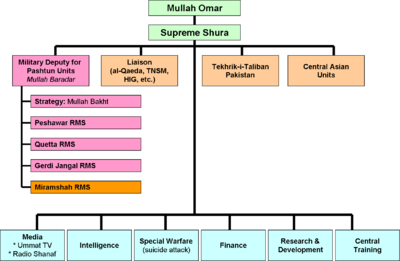 It is believed to be organized around four regional military shuras and ten committees. There are also allied groups that fight under the shura organization, as well as liaisons to cooperating but not controlled organizations such as al-Qaeda, the Pakistani Tehrik-e-Nifaz-e-Shariat-e-Mohammed (TNSM or the Movement for the Enforcement of Mohammed's Law), and Gulbuddin Hekmatyar's Hezb-e-Islami Gulbuddin (HIG).[3]

All are based in Pakistan.[4]

A 2008 interview with a regional commander, in Afghanistan, Qari Bashir Haqqani in the Kunduz area, indicated that military decisionmaking has become decentralized, although this is in the context of guerrilla warfare rather than the large-scale operations against the Northern Alliance. "Every local commander is responsible for his own areas. The area commander is accountable to the district commander who is in turn accountable to the provincial governor. The governor is then accountable to the provincial executive council, which deals with Taliban military shura." He denied any orders came from outside Afghanistan, such as from Mullah Omar's reported location in Quetta, Pakistan. [5]

Commanding activities in southern and western Afghanistan, this is is currently led by Hafez Majid.

This shura, in Peshawar, Northwest Frontier Province, has authority over eastern and northeastern Afghanistan. Abdul Latif Mansur is thought to currently lead the Peshawar shura. It was led by Maulvi Abdul Kabir before his arrest in Pakistan in February 2010.

Based in Miramshah, North Waziristan, in the Federally Administered Tribal Area, this is the headquarters for southeastern Afghanistan, including the provinces of Paktika, Paktia, Khost, Logar, and Wardak Provinces. It is led by Siraj Haqqani, in the Haqqani Network.

Gerdi Jangal is a refugee camp in Baluchistan. The shura directs activity Helmand Province and possibly Nimroz Province. It is under by Mullah Adbul Zakir.

Some committee leaders are members of the shura proper.

Some of the Pakistani groups assist the Quetta shura in targeting Afghanistan, while others seem interested only in Pakistan. It may be even more active in the drug trade as a source of financing, given that it probably no longer receives funds from Saudi Arabia, Inter-Services Intelligence, and Osama bin Laden as it did in Afghanistan.[6]

To varying extents, groups who have spoken of Omar as a spiritual leader include Radical Islamists, to whom the Taliban were allied, became an increasing problem for Pakistan. Sufi Mohammed, the leader of the pro-Taliban Tehrik-e-Nifaz-e-Shariat-e-Mohammed (TNSM or the Movement for the Enforcement of Mohammed's Law), as well as TNSM/Taliban leaders Fariq Mohammed in Bajaur, Mullah Fazlullah in Swat Valley, and Omar Khalid in Mohmand.

The Haqqani Network, formed by Jalaluddin Haqqani, still seems loyal to Omar and the Quetta shura, as it operates in both Afghanistan and Pakistan. Operational direction of the network appears to have passed to his son, Sirajuddin (Siraj). The younger Haqqani is also the head of the Miramshah Regional Military Shura within the Taliban structure.

Mehsud group members head Tehrik-e-Taliban (TTP), the most radical Pakistani Taliban faction, which wants to overthrow Pakistan's government. In contrast, the factions of Maulvi Nazir Ahmed (often called Maulvi Ahmed), in the plains and lower hills of South Waziristan, and Hafiz Gul Bahadur in North Waziristan, focus more on sending fighters into Afghanistan.[7] Nazir's movement is primarily Arab, while Mehsud's forces include volunteers from the Islamic Movement of Uzbekistan. [8]

Omar has historically been more of a charismatic yet distant leader, with others in the shura taking the more operational role. 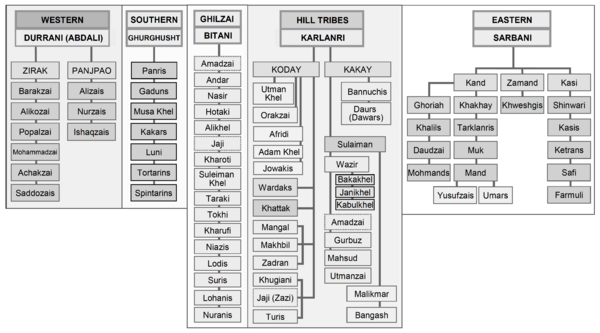 Suggestions have been made that some Taliban may have informed on other Taliban of different Pashtun groups. Over time, there were rivalries within Pashtun clans and tribes within the Pashtun.

Several of his deputies were killed in Afghanistan, but, recently, there have been key captures such as the military deputy in 2010 and possible #2, Abdul Baradar. Baradar probably was captured in an unusual cooperation of the Pakistani Inter-Service Intelligence and U.S. Central Intelligence Agency.

Even more recently, another member of the shura, Abdul Kabir, has been reported to have been captured in a purely Pakistani operation. There were further reports of a third senior Taliban affiliated with the Quetta group, Mohammed Yunis (Afghan), the Taliban’s shadow governor of Zabul Province. [10]

The Long War Journal summarized those killed or captured:[4]