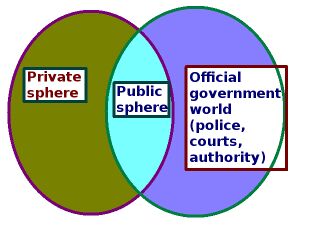 The public sphere is a conceptual zone between the private world of individuals and the official world of government authority. It's where private people can meet in public and discuss politics as well as read newspapers.

The public sphere is a symbolic place between the private world of individuals and the official world of government and authority. It is a place where private people can come together and discuss matters of public policy and debate matters of public interest. These meetings can happen phyically in public places such as the town square, in coffee houses and cafes, in restaurants and museums. In addition, the meetings can be separated by time and distance when editorials are written in newspapers, or when books are written and published, or in theater performances. By having discussions of a rational-critical nature, in which rationality prevails, that citizens can become informed about public matters and participate indirectly in helping shape public policy.[1] 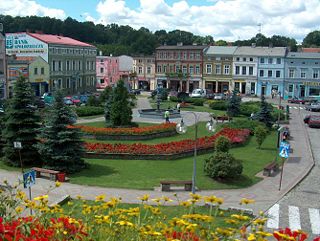 The public sphere is expressed architecturally in a town square such as this one in Koronowo in Poland.

The public sphere is widely seen as a counterweight to political authority, and is a place where public opinion is formed. It isn't controlled by the State; but at the same time it is not totally within the province of private individuals. The theory is that in a legitimate society, the public sphere is an important element in guiding political action.[2] Discussing events and possible future actions by the government can lead to the formation of a common judgment or consensus.[3] In contrast, the private sphere was bounded by private property, homes, and apartments, as well as the private thoughts of individual citizens.

The concept of the public sphere was based on ideas by German philosopher and sociologist Jürgen Habermas in his book The Structural Transformation of the Public Sphere.[4] He argued that the public sphere was created in bourgeois Europe in the aftermath of the Middle Ages, during the Renaissance. Merchants needed information about distant markets to be able to take advantage of favorable trading opportunities, and a rising class of middle class persons needed to share information as well as places to shop. Coffeehouses and cafes provided venues where private people could meet, debate, think, be exposed to new ideas, and form opinions. It was a new type of civic society characterized by the free exchange of ideas, and it depended on literacy and journalism to flourish. A new kind of critical journalism emerged which encouraged citizens to actively monitor what authorities were doing, criticize their actions publicly, and serve as a counter-balance to the force of government ministers. Habermas believed that bourgeois society cultivated a world where public opinion could flourish and be respected. It was a kind of platform where new ideas could be presented. 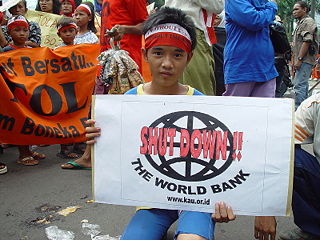 The public sphere is a place where dissatisfied citizens can protest public policy.

Habermas argued that the public sphere has been declining in Western Europe, including Britain, France, Germany, and in the United States since the 1800s because of a variety of causes, and that today there is only the semblance of a public sphere. What happened? According to Habermas, consumerism, the mass media, the decline of citizenship, less interest in public affairs, and other factors helped work against the public sphere. Today, Habermas argues that there is only the appearance of a public sphere, that genuine political participation has been replaced by opinion polling, and news has been transformed into a consumer commodity to be packaged and sold like packaged goods.[5]