Penguin/Catalogs/Penguins in the northern hemisphere

From Citizendium
< Penguin‎ | Catalogs(Redirected from Penguins in the northern hemisphere)
Jump to: navigation, search 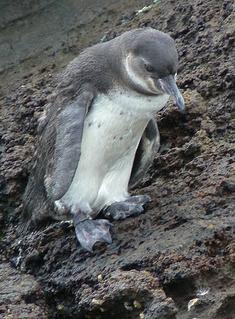 This Galápagos penguin lives around the equator.

Despite the fact that nearly all penguin species are native to Earth's southern hemisphere, there are, remarkably, penguins in the northern hemisphere as well. These flightless birds are at large in northern waters not only because there are penguin colonies on islands crossing the equator, but also because of two attempts to introduce penguins to the Arctic Circle.

Although most penguins' natural habitat lies well within the southern hemisphere, many do live further north. The Galápagos penguin is the sole equatorial species, living mainly in colonies of several hundred birds on two of the Galápagos Islands west of Ecuador in South America. Because the northernmost point of Fernandina Island lies just inside the northern hemisphere, it is possible for these penguins to make regular incursions into the north.

Penguins in the Arctic Circle

The possibility of penguins in the Arctic Circle living for some time cannot be conclusively ruled out, as there have been at least two attempts to introduce them to the northern hemisphere.

The Arctic: a habitat unfit for penguins

Penguins have certainly not themselves made the Arctic their home; the Earth's poles are probably too far apart for these animals to make the journey. Penguin experts would not recommend introducing a penguin colony towards the North Pole as they would count as an invasive species, possibly disrupting the ecosystem and disturbing the food chain; this could threaten other wildlife. Alternatively, penguins would be unable to compete successfully with local species, meaning they would succumb to starvation, disease or predation.

Penguins artificially introduced to the Arctic

Despite fears that penguins would not survive in Arctic conditions, groups of these animals have been introduced to the north. In the nineteenth century, the great auk was hunted to extinction by whalers; 1930s scientists speculated that penguins could fill this ecological niche, providing a source of meat and eggs.[1] In 1936, a team from the Norwegian Nature Protection Society led by Carl Schoyen released nine king penguins in northern Norway. In 1938, a separate group released several macaroni and jackass penguins into the same region. For most individual penguins, the trail then went cold; one was certainly killed by a local huntswoman who apparently mistook it for a demon, and another was caught on a fishing line as late as 1944, apparently in good health. No others were conclusively sighted.[2]

No further attempts to introduce penguins to the Arctic Circle are on record; any penguins north of the equator are confined to zoos, with some also acting as mascots for various organisations.[3][4]

Penguins of the southern hemisphere found further north than usual

Occasionally, other species of penguin are spotted much further north than their natural grounds, though still inside the southern hemisphere. As these animals make good swimmers, it is possible for them to journey considerable distances, as one magellanic penguin from southern Chile proved, the bird travelling 3000 miles (5000 kilometres) to end up in Peru.[5] Larger groups of Antarctic species also regularly wash up on the coastline of Brazil every year, having floated thousands of miles on melting ice floes or carried off by ocean currents, perhaps while learning to swim. While this phenomenon has kept Brazilian zoos well-supplied with penguins, and given locals the opportunity to take as pets these survivors of shark-infested waters,[6] more recently the Brazilian government has arranged for hundreds of the birds to be repatriated to Antarctica with the help of the air force and navy.[7][8]

The 'Arctic penguin' and the word 'penguin'

The myth of the 'Arctic penguin' persists on the internet,[9] possibly encouraged by various factors, from casual birdwatchers mistaking auks for penguins, to Christmas cards featuring penguins alongside northern polar bears.[10] Indeed, one story on the origin of the word penguin claims that Welsh-speaking sailors named auks pen gwyn ('white head'), which were then mistaken for penguins in the northern hemisphere. The Oxford English Dictionary disputes this story, noting that the etymology of the word is obscure.[11]