The grand strategy of Pakistan towards India dominates all aspects of its foreign policy, including Pakistani policy towards Afghanistan and Pakistani policy towards the U.S.. One must never forget that these two states have fought several wars, and now face one another with nuclear weapons. Western concerns with terrorist groups in Afghanistan and Pakistan are secondary to this balance of power. 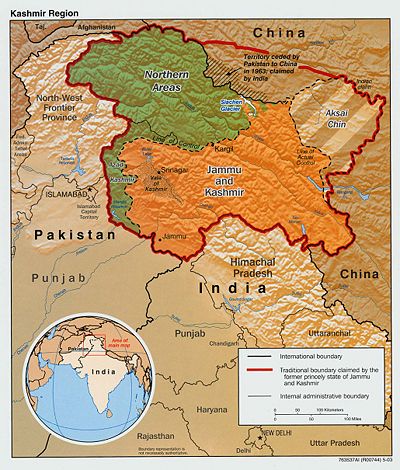 Note that Kashmir provides a path for operations in and out of India. By going through Pakistan's northern area, bases in Afghanistan become a sanctuary for Pakistani-approved operations in Kashmir. The availability of such bases was long a goal of Pakistani Inter-Services Intelligence.

Pakistan has been a client of both China and the United States, both nations doing so, in part, to balance the client relationship between Russia and China. The Russo-Chinese relationship, with the continued growth of the Indian economy and decline in Russia, approaches equality in many strategic areas.

While westerners may think of Pakistan principally in terms of terrorism in Central Asia, dominating Pakistani thinking is the reality that two nuclear-armed powers, with a history of war, face one another.

There have been three major wars between India and Pakistan:

Pakistan's conventional military is smaller than India's, and the Pakistani weapons industry is less mature than that of India's. U.S. nuclear counterproliferation rules that prevented the delivery of F-16 Fighting Falcon fighter-bombers were perceived as disproportionate, given that the Soviets, and then Russians, have sold extensive weapons to India and are now co-developing them.

Pakistani opposition leader Nawaz Sharif (PML-N) met with the Indian High Commissioner and described good relations as essential. [1] He was backed, a few days later, by Prime Minister of Pakistan Yousef Raza Gilani, who pointed to the problem with the talks being stalled as a result of the 2008 Mumbai attacks by Lashkar e-Tayyiba. India had said "meaningful dialogue" was impossible until India stops the infiltration and destroys terrorist infrastructure, while Pakistan wants the talks to continue without conditions. [2]

As well as using Afghanistan as a base, Inter-Services Intelligence made use of the relative lawlessness of the Federally Administered Tribal Area (FATA). Pakistan "benefited from FATA being a 'blackhole' from which it could launch operations into Afghanistan and train militants operating in Afghanistan, Kashmir, and the rest of India." [3]

Pakistan's historical, self-defeating support for the Taliban and similar groups is rooted in the belief that Pakistan requires unconventional forces, as well as a nuclear deterrent, to offset India's conventional military and industrial might. This logic of existential insecurity has informed Pakistan's policies in Afghanistan because Pakistani generals have seen an Indian hand in Kabul since the days of the Soviet invasion. They interpret India's goals in Afghanistan as a strategy of encirclement of Pakistan, punctuated by the tactic of promoting instability among Pakistan's restive, independence-minded Pashtun, Baluch and Sindhi populations.

Coll went on to observe that if Pakistan sees the U.S. as willing to follow very-long-term strategies in South and Central Asia, such that Pakistan would be seen as a strategic ally such as Turkey or Egypt, "then it will have a reasonable if uncertain chance to persuade the Pakistani security establishment over time that the costs of succoring the Taliban and like groups outweigh the benefits." A stabilizing strategy would also send a message that"the Taliban will never be permitted to take power in Kabul or major cities."

Rather than continuing to evade the relevance of the India factor to AfPak theater, the Obama administration must energetically facilitate and monitor the India-Pakistan peace process (which is lately showing some signs of life courtesy resumption of back channel diplomacy).Hassan Abbas, along with other analysts, point out that Western governments have regarded the situation as they would like it to be, as opposed to what it is. The Obama Administration metrics[5] do not address "Pakistan-India relations as a factor in understanding which way the wind is blowing in Pakistan's security environment."

While the Obama administration has every right to wish that Pakistan delink its rivalry with India in the Kashmir region from its policy towards Afghanistan (and consequently in Federally Administered Tribal Areas), one cannot ignore the prevailing ground realities. [6]