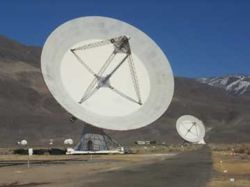 The Owens Valley Solar Array (OVSA) is the only solar dedicated radio observatory in the US. The array consists of two 27-meter antennas together with five 2-meter dishes which observe the Sun The Solar Array is operated by the New Jersey Institute of Technology.

Owens Valley Radio Observatory personnel also help operate Combined Array for Research in Millimeter-wave Astronomy (CARMA), located in the Inyo Mountains. This is a collaborative effort between Caltech, University of California Berkeley, University of Illinois, University of Maryland, and the University of Chicago. Researchers are using a 23-element interferometer that observes at centimeter and millimeter wavelengths.

The first telescope was built in 1958 and was originally located in Palomar, California, USA. The 32-foot telescope was moved to the Owens Valley Radio Observatory in 1958. John Bolton and Gordon Stanley designed this telescope.

Construction of a six-element millimeter array consisting of six 10-meter dishes was done. The array is located at Cedar Flat and is part of CARMA.