The normal ovulatory cycle in women is a complex and important process which repeats throughout the childbearing years. The cycle centers on the release of a mature oocyte from the ovary, and this event is a basic determinant of female fertility. During the cycle, the lining of the uterus, called the endometrium, changes to accommodate the possibility of implantation of a zygote. "Zygote" is a scientific name for the fertilized ovum, and is the single cell that is the very earliest stage of an embryo. If no pregnancy is established, this endometrial lining is shed as menstrual blood; and the cycle repeats. As the most dramatic outward evidence of these events is menstruation, the events of the cycle are often referred to as the 'menstrual cycle'. All female mammals have an ovulatory cycle that has similarities to ours, but only women (and some other great apes) menstruate. The length of the cycle is very different in different species (the rat, for example, has a four-day cycle). Technically, it is possible to have an "anovulatory" menstrual cycle in which no egg is produced (see menarche), but both terms "menstrual cycle" and "ovulatory cycle" are used correctly to describe the periodic ovulation and shedding of endometrial lining by women through the childbearing years.

Several hormones play vital roles in the ovulatory cycle in all mammals: some are produced by the ovaries themselves, others by the pituitary gland and others by the part of the brain known as the hypothalamus. These hormones are described in the table below.

The hypothalamus secretes pulses of gonadotropin-releasing hormone (GnRH) throughout the cycle. These pulses are secreted into a system of portal blood vessels that travel directly to the anterior pituitary gland. There, they act on gonadotroph cells - endocrine cells where two other hormones, luteinizing hormone (LH) and follicle-stimulating hormone (FSH) are produced. GnRH stimulates the production and the secretion of both of these hormones, but affects secretion of the two hormones differently at different stages of the cycle. At the beginning of the cycle, when estrogen levels are low, mainly FSH is secreted.

(1) The rising FSH levels cause follicular recruitment: a few of the eggs begin to develop as follicles.

(2) As the follicles develop, they secrete increasing amounts of estrogen.

(3) The increasing estrogen levels cause cells of the endometrium to proliferate and also cause important changes in the cervix: the amount of mucus secreted by the cervical epithelium increases, its consistancy changes, and opening of the cervical os increases.

(5) The high concentrations of estrogen stimulate the production of another hormone, inhibin, which shuts off secretion of FSH, so that no new follicles are recruited. The dominant follicle of the ovary that will ovulate this cycle continues growing.

(6) Estrogen is secreted by the dominant follicle, the rising blood levels of estrogen feeds back negatively on the hypothalamo-pituitary axis. This reduces the secretion of GnRH from the hypothalamus, producing a fall in the size of the pulses of LH.

(7) When estrogen levels have been high enough for long enough the negative feedback suppression of GnRH secretion is overcome, and there is a dramatic surge release of LH from the pituitary. This surge of LH initiates luteinization of the follicle. The ovum is released from the follicle, and enters the fallopian tube on its way to the uterus. The ovum now has just 12 to 24 hours of life as a gamete, and during that time will either be fertilized or will die.

(8) The luteinized follicle now starts to secrete mainly progesterone, rather than estrogen. This first rise in progesterone level maintains the plateau of LH during the LH peak.

(9) The high plateau of LH secretion helps maintain a normal corpus luteum, and an adequate luteal phase of the menstrual cycle.

(10) The corpus luteum produces both progesterone and estrogen.

(11) Progesterone changes the lining of the uterus (endometrium) and the cervical mucus. The endometrium becomes the secretory type. The cervical mucus, changes from estrogenic to progestational type. If fertilization has not occurred, the corpus luteum begins to regress after 6–7 days, tapers off secretion of estrogen and progesterone.

(13) This drop in sex hormone levels releases the suppression of FSH and LH on the hypothalamo- pituitary axis. Go to (1), a new cycle has begun. 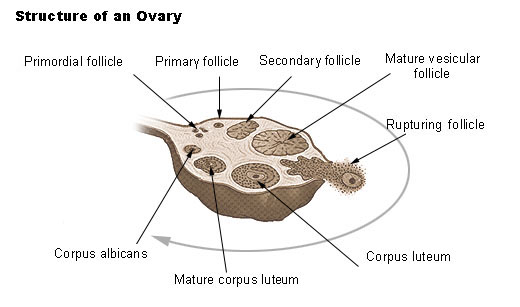