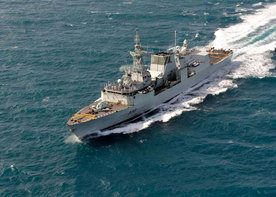 Operation UNIFIED PROTECTOR is the name for a North Atlantic Treaty Organization (NATO) action to enforce United Nations Security Council Resolution 1973 against the Muammar Gaddafi government of Libya. It is a partial replacement for the initial U.S.-led Operation ODYSSEY DAWN. Its efforts were initially restricted to the no-fly zone and arms embargo aspects of the Resolution, not the wider authorization to protect civilians. NATO officials estimated it would take approximately 90 days. [1] On 27 March, however, NATO accepted the responsibility for the whole of UNSC Resolution 1973, taking "all means necessary" to protect civilians, including attacks on Gaddafi government forces and their supporting structure. "NATO has no intention of deploying land forces anywhere in Libyan territory."[2]

Most military authorities found that Libyan fixed-wing aircraft have had a fairly limited effect on the suppression of rebels, and, in the past, have lost every air-to-air engagement with Western fighters. Armed helicopters played a greater role, but the real threat was from ground forces. On 25 March, Juan Cole suggested that the part of Resolution 1973, which calls for protection of civilians, will require attacking artillery and armor advancing on rebel-held cities. The most dramatic example of this was the destruction, by French aircraft, of the armored brigade threatening Benghazi. Turkey and Germany, according to Cole, were hesitant about broader, so he expected the more extensive intervention to be conducted by a "sub-NATO UN alliance...probably led by France."[3] This was overtaken by the NATO announcement.

NATO Secretary-General Anders Fogh Rasmussen announced that NATO has agreed to take command of the no-fly zone proper, although other operations, such as ground attack, were not covered.

We are taking action as part of the broad international effort to protect civilians against the attacks by the Gaddafi regime. We will cooperate with our partners in the region and welcome their contributions. All NATO Allies are committed to fulfill their obligations under the UN resolution. That is why we have decided to assume responsibility for the no-fly zone.[4]

Initially, it was unclear, however, if UN Resolution 1973's provisions to protect civilians will be interpreted, by NATO, to take over the attacks on regime forces and other operations beyond the no-fly zone and arms embargo. Rasmussen told CNN "What we have decided today is that NATO will enforce the no-fly zone. We are considering whether NATO should take on overall responsibility. That decision has not been made yet."[5]

Simply to avoid fratricide, the two operations would have to coordinate efforts. Without, for example, exchange of surveillance information and identification friend or foe codes, there would be a danger of an aircraft, enforcing the no-fly zone, shooting down a ground attack aircraft trying to protect civilians. It is understood that controversy exists about proactively attacking Gaddafi forces not actively attacking civilians, but this does not rise to the level of lethal action among outside nations.

While NATO will be the top-level military command, the U.S. will continue to provide specialized capabilities. Two major commands will be involved: United States Africa Command (USAFRICOM), under Gen. Carter Ham, as the combatant headquarters. USAFRICOM is normally a staff and planning organization, which draws on other commands for force. In this case, it will draw on United States European Command (USEUCOM).

Not only the military, but well-connected think tanks such as the Center for a New American Security, emphasize minimizing American involvement. [9]

Overall command is at the NATO Maritime Command in Naples. Forces operate from that and other bases in Italy.

In addition, it uses a Turkish base at Izmir, and multiple Greek bases. [10]

Forces operating from the Greek bases include aircraft from Greece, the United States, France, Belgium, UAE, Qatar, and Denmark; aircraft from other nations are expected. [10]

Existing organizations to be used for command and control are Maritime Group and the standing Mine Warfare force. Under NATO will also take responsibility for the arms embargo against the Gaddafi government. Commanded by Vice Admiral Rinaldo Veri, of the Italian Navy, with headquarters at NATO Maritime Command Naples, the operation will intercept aircraft and ships carrying weapons or mercenaries. Ships will remain in international waters, but "have the right to stop and search any vessel they suspect of carrying prohibited cargo." [11]

Naval forces assigned to date are: