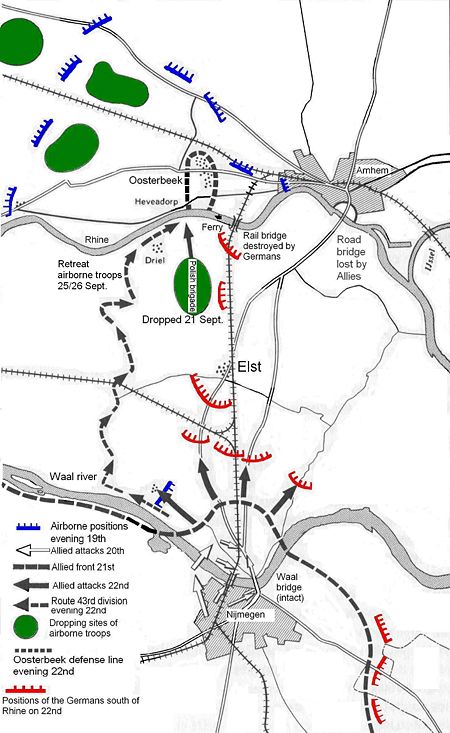 CC Image
The "Battle of Arnhem" was mainly about the possession of two road bridges: at Nijmegen (conquered by the Allied forces) and Arnhem (held by the Germans)

Operation MARKET-GARDEN was an Allied operation of the Second World War, intended to seize bridges over the Maas, Waal and Rhine River in the Netherlands. While the other river crossings were necessary prequisites for land-based forces to move forward, the Rhine rail and road bridges at Arnhem were the most critical targets. The operation started the evening of September 17, 1944 with dropping of airborne troops to the West of Arnhem and was over after remaining British and Polish paratroops retreated from the Northern Rhine bank on September 25 and 26. The end result was that the Maas (Meuse) and Waal bridges were in Allied hands and that the road bridge at Arnhem was held by the Germans (they blew the rail bridge during the battle).

The name "MARKET-GARDEN" reflected two major sub-operations: MARKET was the actual parachute and glider landings by the three divisions (U.K. 1st Airborne Division, U.S. 82nd and 101st Airborne Divisions) and one Polish brigade of the First Allied Airborne Army; GARDEN was the linkup by XXX Armored Corps. Unknown to the Allied command, an SS German armored corps had retreated close to Arnhem to rest and recover from battle, creating a much stronger defense than expected. The drop and landing zones were far enough from the actual bridges, in Arnhem, that they could not be reached in a single rush, as was Pegasus Bridge at the Battle of Normandy.

By every account, the British forces in Arnhem fought brilliantly, but from unfavorable positions against much stronger resistance than expected. Eventually, the 1st Airborne Division broke up, some units surrendering after fighting overwhelming odds, and other units and individuals managing to evade capture, cross the Rhine, and reach friendly forces.