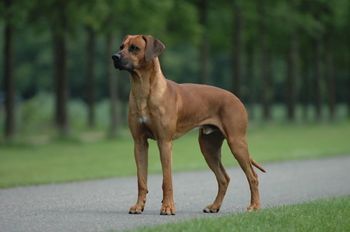 Onion is the name of a mastiff-Rhodesian ridgeback mix dog in Henderson, Nevada, that became the focus of a controversy after it caused the death of a one-year-old baby on April 28, 2012.[1] The tragedy initiated a still-ongoing legal battle that has reached the Nevada Supreme Court as to whether the dog should be euthanized, with the key issue being who actually owns the dog in question.[2] Animal welfare advocates spearheaded by the Lexus Project are trying to keep the dog from being euthanized and are raising donations for their cause—the Onion case, they say, being an example of overreaching law enforcement throughout the United States against dogs arbitrarily declared dangerous.

Elizabeth Keller's family had gathered at her home in Henderson, Nevada, to celebrate the first birthday of her grandson, Jeremiah Eskew-Shahan. During the party, Jeremiah crawled over to Onion and tried to grab hold of the dog in order to stand up. As the boy's grandmother leaned over to pick up Jeremiah, the dog grabbed the boy's head and began to shake the child. The boy's father and others quickly rescued the child from the dog.

However, the boy had been mauled. Paramedics were called and he was taken to a nearby hospital. He was later transferred to the University Medical Center but died the next day, April 28.[3]

After the attack, Henderson animal control officials declared Onion a vicious dog and impounded him with the acquiescent of its owner—vicious dogs, according to Nevada state law, are euthanized after a mandated quarantine. "The dog attacked and killed a child," animal control spokesman Keith Paul said. "It would be irresponsible of us to allow this dog to be adopted out." At the time, Elizabeth Keller, owner of the dog, agreed. "My grandchild is gone, and I want my dog to be in peace. He won't be in peace until he's put to sleep," she said, and the family did not appeal the impoundment and quarantine of Onion. Later, however, Keller said in a sworn statement that she had turned over Onion's ownership while under duress, and that she now wanted the Lexus Project to have ownership of the dog.

The New York-based Lexus Project was originally formed to defend a so-called "vicious" greyhound named Lexus that was impounded after killing a Pomeranian dog, but evolved to defend all breeds of dogs. Chicago dog rescuer Les Golden originally spearheaded the campaign to save Onion. "The dog deserves to be saved," he said, and started a nationwide campaign to save Onion. He contacted the Lexus Project, located a rescue, the Blue Lion Rescue located near Denver, Colorado, which agreed to take Onion upon his release, and located Las Vegas counsel to work with Lexus Project attorney Richard Rosenthal. The Lexus Project created a trust for the care of Onion, which was funded by dog welfare advoates nationwide. According to Lexus Project filings, Keller signed over dog ownership to the Lexus Project.

Since his impoundment, Onion has been held at the Henderson Animal Shelter while the question of euthanizing him is litigated in various Nevada courts. At the heart of the legal issue is whether Onion's ownership was relinquished to the city of Henderson after the attack on the child.[4] Clark County Nevada District Judge Joanna Kishner has issued repeated legal orders allowing the euthanasia of Onion. "Lexus does not have any property rights to the dog, so it had no legal right to seek the temporary restraining order," Kishner said in one ruling.[4]

Las Vegas attorney Dominique Geller, working with the Lexus Project, prepared a brief which led the Nevada Supreme Court to accept the appeal from the District Court. The court granted a stay without termination date.[5] On June 8, 2012, Kishner denied a temporary restraining order sought by the Lexus Project animal rescue group.[6]

On June 13, 2012, a settlement judge was assigned to work out a compromise between all parties involved, but no settlement was reached and the case returned to the Nevada Supreme Court. The City of Henderson refused to enter into the settlement discussions.[7] On August 26, 2012, the high court ordered the dog to be kept alive until it could reach a final decision on its disposition. The court ordered all sides in the case to make their arguments before them on September 24, 2012.[8]

The dog remains in solitary confinement, confined in a cage.[9]

Because of the high profile of the case and its potential legal precedent, the Court ordered oral arguments en banc,[10] which were held on July 3, 2013. During questioning by the Court, the City of Henderson admitted that the dog has not been exercised nor taken outside of his cage since his impoundment, a period of 15 months. The proceedings are available at the Supreme Court website, and were placed on You Tube by KTNV Nevada.[11]

On December 19, 2013, the Supreme Order remanded the case back to the District Court for an evidentiary hearing, noting that despite lengthy commentary and conclusions of fact by Judge Kishner in the district court, no evidence had been presented.[12][13]

On December 19, 2013, the Lexus Project, following months of commentary by dog lovers and supporters of Onion, filed a motion to extend the stay and provide exercise for Onion. The City noted that beginning in November 2013 the dog was being walked for ten minutes twice a week. This led his supporters to clamor for additional compassion toward the dog, now well into his 8th year. The life expectancy for his breed is 8 to 10 years.