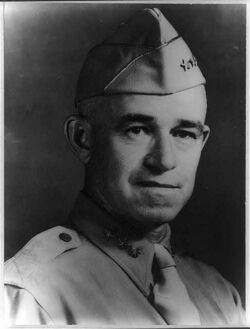 Omar Bradley (1893-1981) , was an American general during World War II and the Korean war, as well as Chief of Staff of the Army and Chairman of the Joint Chiefs of Staff. He was the last officer named to the five-star rank of General of the Army.

Bradley was born in Clark, Missouri, on February 12, 1893. He graduated from the United States Military Academy, in 1915. He was stationed at various army camps in the United States and did not serve in Europe during World War I. He became instructor of mathematics at West Point in 1920. After graduating from the Command and General Staff School in 1929, he was appointed instructor at the Infantry School, where he came to know and evaluate many of men who became senior officers in World War II. In 1934 Bradley graduated from the U.S. Army War College, and returned to West Point, where as an instructor in tactics. In 1938 he was transferred to Washington to serve on the Army General Staff, becoming its assistant secretary in July 1939.

In 1941 he was appointed commandant of the Infantry School at Fort Benning, Georgia, and was promoted to the rank of brigadier general.

After the United States entered World War II, Bradley was made a major general and was sent to North Africa in February 1943, to serve as field aide to General Dwight D. Eisenhower. There he succeeded General George S. Patton as commander of the II U.S. Corps in the Tunisian campaign, which he directed in the capture of Bizerte. Promoted to the rank of lieutenant general, Bradley commanded the II Corps in the invasion of Sicily.

After driving the Germans and Italians out of Sicily he moved to London as commander in chief of the American ground forces preparing to invade Nazi-occupied France in 1944. In June 1944 Bradley led the First United States Army in the invasion of Normandy, and planned the decisive breakthrough at St. Lo.

Bradley's greatest triumph came when the offensive ground to a halt in the face of stiff German resistance; Bradley called in strategic air power using big bombers with huge bomb loads to attack infantry. Operation Cobra used strategic bombers (under Eisenhower's control) starting July 21, 1944. Cobra was a short, very intensive bombardment with lighter explosives before the American ground advance, so as not to create greater rubble and craters that would slow Allied progress. The bombing knocked out the German communication system, leading to confusion and ineffectiveness, opening the way for the ground offensive. Bradley sent three infantry divisions - the 9th, 4th and 30th - to move in close behind the bombing; they succeeded in cracking the German defenses, opening the way for lightning advances by armor commanded by Patton to sweep around the German lines.[1]

Bradley took command of the Allied Twelfth Army Group in France in August 1944, and led it successfully for the rest of the war. Although surprised by the German counterattack at the Battle of the Bulge in December, Bradley crushed the German attack, found an open bridge across the Rhine at Remagen, and his tanks raced into the German heartland.[2]

His great mistake was the failure to close the "Falaise Gap." Bradley on August 13, 1944, unexpectedly halted the advance of Patton's XV Corps, stopping it 25 miles from its juncture with Canadian forces moving south. [3] The Allies thereby failed to close the Argentan-Falaise pocket containing the almost-surrounded German forces. About 240,000 German troops (and 30,000 vehicles) escaped through the gap, avoiding encirclement and almost certain destruction. Bradley, over-cautious, had assumed that incorrectly the Germans had already mostly escaped, and feared a German counterattack against overextended Americans. Bradley later admitted a mistake had been made, but blamed his superior Montgomery, as did Eisenhower, for moving the Canadians too slowly.

Bradley underestimated the effectiveness of the Allied air forces in stopping all German movements during the daytime, thus making a counterattack highly risky for them. The opportunity existed because Hitler had refused to allow his army to escape until August 16.[4] In broader perspective, Bradley, with Montgomery. had in 10 weeks destroyed the powerful German armies holding strong defensive positions and pushed the enemy back into Germany.

At war's end Bradley remained briefly in Germany with the Army of Occupation. Bradley was beloved by soldiers, who called him "GI General"; President Truman recalled him to Washington in June 1945 making him Veterans' Administrator. He was promoted to the temporary rank of full (four-star) general in March 1945, and in 1948 succeeded General Dwight D. Eisenhower as Chief of Staff of the Army. In 1949 Bradley was appointed to the permanent rank of general and in 1950 to general of the army (with five stars). In August 1949 he was made chairman of the new Joint Chiefs of Staff and reappointed in August 1951. He was the chief military policy maker during the Korean war, and supported Truman's original plan of rolling back Communism by conquering all of North Korea. When Chinese Communists invaded in late 1950 and drove back Americans in headlong retreat, he agreed that rollback had to be dropped in favor of a containment of North Korea. Containment was adopted (and continues to 2008). He was instrumental in Truman's firing of General Douglas MacArthur, who wanted to attack China. In testimony to Congress Bradley denounced MacArthur's proposals saying it would be the "Wrong war in the wrong place at the wrong time."

Bradley retired from the army on Aug. 13, 1953, after 42 years of service. He became head of Bulova Watch Company; in 1956, he headed a presidential commission on veterans' benefits. His memoirs, A Soldier's Story, (ghostwritten by A.J. Liebling) appeared in 1951; a fuller autobiography A General's Life: An Autobiography (coauthored by Clay Blair) appeared in 1983) He served as technical advisor to the Oscar-winning movie "Patton" (1970), in which actor Karl Malden favorably presented Bradley's wisdom in counterpoint to Patton's rashness. Bradley died in New York City, Apr. 8, 1981. The Army named the Bradley Fighting Infantry Vehicle after him in 1979.