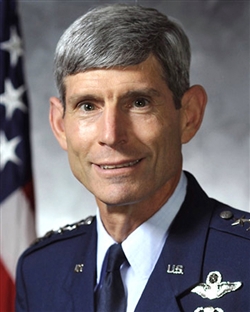 Norton A. Schwartz is a general in the United States Air Force, and has been Chief of Staff of the Air Force since 2008. Prior to assuming the CSAF position, he commanded United States Transportation Command. Much of his career, before that, was in the transportation component of special operations; he headed the Special Operations component (SOCPAC) of United States Pacific Command.[1]

Schwartz, along with Secretary of the Air Force Michale Donley, wrote a Washington Post piece in April 2009, "Moving beyond the F-22", agreeing with Secretary of Defense Robert Gates' decision to cap production of the F-22 Raptor, beloved to the fighter generals of the Air Force. They said the F-22 is unquestionably a superb aircraft for certain missions, but it is too expensive for more likely missions that can be met by other aircraft and technologies. [2]

An August 2010 report suggests he may be in line for another promotion, to Vice Chairman of the Joint Chiefs of Staff, replacing GEN James "Hoss" Cartwright. While the promotion possibility was not confirmed, the article stressed that Schwartz was trusted by Secretary of Defense Robert Gates. It also suggested Schwartz, respected as an advocate of "jointness", would be replaced by GEN Kevin Chilton, head of United States Strategic Command.[3]

His predecessor as CSAF, GEN T. Michael Moseley, was asked to resign by Secretary of Defense Robert Gates,[4] and retired in 2008. Two factors are reported into Moseley's firing, and, indirectly, Schwartz's selection. The better-known is an August 2007 incident in which live nuclear weapons were unknowingly and inappropriately transferred from Minot Air Force Base to Barksdale Air Force Base. [5] Arguably, this also was a failure in transportation procedure for critical cargo.

According to Foreign Policy, however, the real reason was his lack of urgency in deploying unmanned aerial vehicles. "Gates replaced him with Gen. Norton Schwartz, head of the Air Force's (sic) unglamorous Transportation Command. He picked Schwartz because he had tirelessly worked out a way, at Gates's request, to speed the air delivery of MRAPs to Iraq; that is, he'd acted as if a war was going on. (Schwartz's promotion made him the first Air Force chief of staff to come up through the ranks as neither a bomber pilot nor a fighter pilot; the move marked the beginning of a huge cultural shift in that branch of the military.) "[4] In contrast to the Foreign Policy article, however, even though Transportation Command may be unglamorous -- and it is a joint, not Air Force, organization -- GEN Schwartz has established credentials in special operations.

He also commanded Alaskan Command, Alaskan North American Aerospace Defense Command Region, and the 11th Air Force. He participated as a crewmember in Operation FREQUENT WIND, the 1975 airlift evacuation of Saigon, and in 1991 served as Chief of Staff of the Joint Special Operations Task Force for Northern Iraq in Operations Desert Shield and Desert Storm. In 1997, he led the Joint Task Force that prepared for the noncombatant evacuation of U.S. citizens in Cambodia.