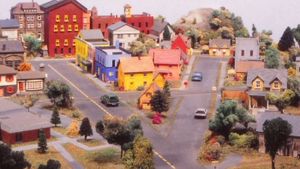 A neighborhood (or neighbourhood), from the vantage point of an individual, refers to a group of houses or buildings surrounding that person's own residence. Neighborhood can also describe the physical area surrounding that residence, as well as the area surrounding particular buildings used as reference points. Thus, "my neighborhood," "my old neighborhood" (usually meaning the area where the speaker lived previously), "the school neighborhood", and "the Cathedral neighborhood". Neighborhoods may be naturally occurring areas, defined by the daily behavior and institutions of neighborhood residents, or areas defined by geographical features (e.g., "the highlands"), location (e.g., "back of the yards"), political wards or precincts, or social and demographic features ("e.g., the Cambodian neighborhood, Chinatown). Some of these features may be visible and contemporary, others may be historical, obscure or lost completely.

In Ancient and Medieval Worlds

The theory of the polis in the ancient world and later St. Augustine's City of God do not explicitly discuss neighborhoods or sub-city units. Even so, neighborhood is evident as an important geographical and social unit in the urban organization of the ancient world. Most ancient cities had recognizable "quarters" (e.g., the Jewish quarter) and as the ancient world gradually evolved into the medieval, recognizable concepts of neighborhood are evident in the role of parish (the sub-units of a diocese or arch-diocese) in the geographical organization of the Roman Catholic church.

The concept of neighborhood has been an important figure in more recent political theory, particularly in the U.S. Neighborhood was an important concept during the Progressive Era for figures like Jane Addams, Robert A. Woods and Mary Parker Follett among others. The seven chapters in Part III (entitled "Group Organization: Democracy's Method") of Mary Parket Follett's The New State (1918) detail that author's novel insight of the political role of neighborhoods (often organized as wards or precincts in U.S. cities) in democracy. Contemporaries concerned with rural communities like L.J. (Lyda Judson) Hanifan also regarded the rural neighborhood as an important unit of organization.

The Neighborhood Youth Corps, Head Start and other Great Society programs were organized on a neighborhood basis.

The post-1945 urban migration to the suburbs beginning with Levittown -arguably a new form of synthetic neighborhood - had devastating consequences for many older urban neighborhoods in the view of some urban theorists. From another perspective, urban neighborhoods are very dynamic units that may always be in state of flux. Neighborhood change may include constantly changing composition, definition and boundaries.

In the 1990s and perhaps earlier, the urban migration to the suburbs was at least partly offset by a countervailing trend of the movement of younger, educated and affluent children of the suburbs moving back into the central city. Often, they moved into deteriorated or dilapidated housing in inner city neighborhoods with an eye on lower-cost purchase and rehabilitation, a process that became known as "gentrification." For some authorities, gentrification meant urban renewal, shoring up of tax bases and community revitalization. For others, gentrification signaled rising housing prices and dislocation of original neighborhood populations.

Roughly 25% of the U.S. population continues to live in rural areas, only a portion of which are primarily or solely agricultural. A rural neighborhood might include not only a group of farms or wineries, but also one or more coal camps, or hollows, a small town surrounding an industrial plant, or any of a growing variety of recreational communities.