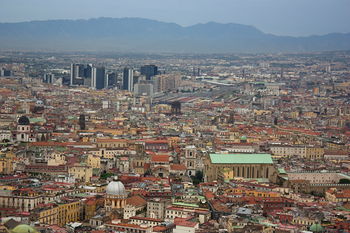 Naples (Italian Napoli, Neapolitan Nàpule) is the capital city of the Campania region and the Province of Naples in Italy. Its metropolitan area is the third largest in Italy and one of the largest in Europe. It is located halfway between the volcano Vesuvius and a separate volcanic area, the Campi Flegrei, both of which form part of the Campanian volcanic arc.

The city itself has a population of around one million, the inhabitants known as Neapolitans, napoletani or poetically partenopei. It is rich in historical, artistic and cultural traditions and gastronomy. The Neapolitan language is the geographically most diffuse Italian language; variations of Neapolitan ('o napulitano) are spoken throughout most of southern Italy.

Between 1266 and 1861 Naples was the capital of the Kingdom of Naples (later of the Two Sicilies), usually simply referred to as "the Kingdom", other Italian states having different denominations. This history, coupled with its size, has given Naples the unofficial status of being the "Capital of the South" in Italy.

Today, the city is served by Naples International Airport at Capodichino, a civilian airport hosted by a military one, once outside the town, but now surrounded by built up areas.

Naples was founded between the 7th and 6th centuries BC by the Greeks (actually, by inhabitants of the Greek colony Cumae) and was named Neapolis, meaning new city.

During the period of Roman domination, the town preserved its Greek language and customs. Following the Roman period, the city was dominated by many different groups of people (Goths, Byzantines, Lombards, Normans, Swabians, Angevins, Aragonese, Spaniards, Austrians, Bourbons and revolutionary French). Nowadays one can see the traces of all those rulers in the monuments, in the culture and in the habits of the town. In 1266 the Angevins moved the capital of the Kingdom of Sicily from Palermo to Naples. Sicily soon parted and formed an independent Kingdom of Sicily. After the Congress of Vienna Naples became the capital of the united Kingdom of Two Sicilies. After a long period of decline following the creation of the Italian State over 100 years ago, the city is making strides in recovering its eminence as a center for culture.

Naples has a typical Mediterranean climate. This means mild winters and hot summers. Rains concentrate during November and December and between March and April. Average temperature during the coldest month is 8°C. (48 F. ) whilst average temperature in July is 24°C. (75,2 F.). The mild climate and the geographical and morphologic richness of the bay of Naples made it famous during Roman times when emperors chose the city as a favorite holiday location. 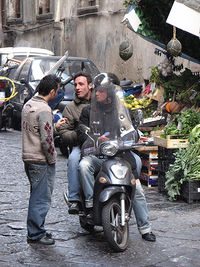 (CC) Photo: Nick Thompson
Neapolitans in conversation are a frequent sight on the streets of their city.

Naples is the largest and most prosperous city in Southern Italy and one of the largest cities in Italy, with a population of 1,000,449. It has a greater metropolitan population of 3,085,447 (other estimates include up to 4.2 million inhabitants in the metropolitan area). Unlike many Northern Italian cities where immigrants make up a large segment, there are few immigrants in Naples. In 2004, there was a total 40,413 foreigners in greater Naples, numbering slightly over 1.3% of the total population. Like many other Western European cities, Naples has been witnessing an influx of Eastern Europeans, who make up the vast majority of the foreigners in Naples. Many of them are labourers from Ukraine, Poland, Albania, and Romania. Non-Europeans such as the Chinese, Arabs from North Africa, and sub-Saharan Blacks are few in number[3].

The provincial economy is relatively weak compared to Italy as a whole, placing only 94th out of the total of 103 provinces in Italy in terms of GVA (Gross Value Added) —that is, wealth produced. Such statistics do not include wealth generated by the so-called "submerged economy"—that is, the black market and untaxed wages—about which reliable statistics are difficult to come by.

Estimates of unemployment in the city of Naples run between 20% and 30%, again depending on accuracy of statistics that attempt to account for the relatively large number of persons who work in the "submerged economy".

Generally speaking, there is currently a move away from the traditional agriculture-based economy in the province to one based on service industries. There were over 138,000 enterprises operating in the province of Naples that employed about 595,000 workers in 2001. In 2002 the companies registered in the Chamber of Commerce Public Register of Naples came to 249, 590. More than half of these are small enterprises with fewer than 20 workers; as well, 70 companies are medium-sized with more than 200 workers; and 15 have more than 500 workers. Employment of the province of Naples in different sectors breaks down as follows:

There are 370 enterprises with more than 5,200 employees in the port of Naples. Collectively, the turnover amounts to about 516 million euros. The main services are: marine repair, storage, furnishing and provisioning, container services, brokers and shipping agents, tourist agents, and insurance brokers.

In 2001, more than 15 million tons of goods were loaded and off-loaded and more than 230,000 containers were handled. The principal loaded goods were: mineral oils, minerals, food, machines and vehicles. The off-loaded goods were: mineral oils, cereals, paper and cellulose, wood, cement. In 2001, the tourist traffic amounted to more than eight million passengers. Recently the port of Naples has been marked by growing commerce, become a more important logistic point in the Mediterranean. In the year 2001, docking of cruise ships increased by 14.3% over 2000. Also, the shipyard sector is important; the port has three floating docks and a growing number of enterprises operating in marine construction and repair.

The international airport of Naples-Capodichino, is the most important in Southern Italy measured by amount of traffic. Approximately 140 flights arrive or depart from the Naples airport on a daily basis. During the year 2002 over 4 millions passengers were served for a 3. 2% increase over 2001.

Among the public and private institutions of higher learning in Naples are:

As well, there are about 22 institutes and 8 research centres of the Consiglio Nazionale delle Ricerche (National Research Council).

In 1995 the Historic Centre of Naples was declared a World Heritage Site by UNESCO.[2] Although Naples is one of the most beautiful cities in Europe and rich in history and monuments, it is sometimes overlooked by mass tourism and is less visited than other Italian cities. There are, however, many attractions within the city. 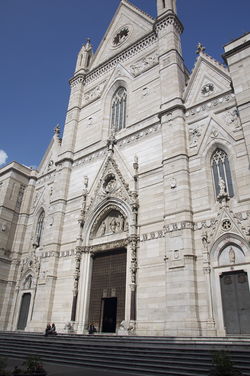 For more information, see: Beneath Naples.

Subterranean Naples consists of old Greco-Roman reservoirs dug out from the soft tufo stone on which, and from which, the city is built. Approximately one kilometer of the many kilometers of tunnels under the city can be visited from the well known "Napoli Sotteranea" situated in the historic centre of the city in Via dei Tribunali. There are also large catacombs in and around the city and other visits such as Piscina Mirabilis, the main cistern serving the bay of Naples during Roman times. This system of tunnels and cisterns cover most of the city and lies approximately thirty metres below ground level. Moisture levels are around 70%. During World War II these tunnels were used as air raid shelters and there are inscriptions in the walls which depict the suffering endured during that time.

Naples is the site of a number of Italian, international and US military facilities. These include the Italian Air Force academy in nearby Pozzuoli; the NATO Joint Forces Command Naples (JFC) (formerly AFSOUTH) in the Naples suburb of Bagnoli, responsible for the coordination of NATO forces in the Southern European Region; the southern NATO naval headquarters on the isle of Nisida; and the US Naval Support Activity Naples, located at the Capodichino airport, a major US Navy administrative base responsible for the support and control of US Naval assets in the United States Sixth Fleet area of responsibility.

Naples has played an important and vibrant role over the centuries not just in the music of Italy, but in the general history of western European musical traditions. This influence extends from the early music conservatories in the 1500s through the music of Alessandro Scarlatti during the Baroque period and the comic operas of Pergolesi, Piccini and, eventually, Rossini and Mozart. The vitality of Neapolitan popular music from the late 19th century has made such songs as "O sole mio" and "Funiculì Funiculà" a permanent part of musical consciousness.

The islands of Procida, (famously used as the set for much of the film Il Postino), Capri and Ischia can all be reached quickly by hydrofoils and ferries. Sorrento and the Amalfi Coast are situated south of Naples. The Roman ruins of Pompeii and Herculaneum (destroyed in the A.D. 79 eruption of Vesuvius) are also nearby. As well, Naples is near the volcanic area known as the Campi Flegrei and the port towns of Pozzuoli and Baia, which were part of the vast Roman naval facility, Portus Julius.

Naples is the home of a number of professional sports teams. Among these are:

Some Neapolitan typical dishes and products are: pizza, mozzarella, spaghetti, sfogliatelle, casatiello, tortano, struffoli, pastiera, babà and many others. Among wines and spirits are Lacryma Christi, red /white wine Vesuvio and limoncello.

Neapolitan cuisine is much varied, the ingredients are easily affordable. Pizza, for example, is composed of flour with water and brewer’s yeast, with tomato and mozzarella on the top. Naples is traditionally the home of pizza in its original version of pizza margherita. The pizza was named when it was served to Queen Margherita during a visit to the city. La vera pizza ("true pizza") is made in a wood-burning oven. There is a certification body that issues recognition to pizza places around the world that have been deemed to make true Neapolitan pizza.

Pizzelle fritte, or montanare, are a variation on the pizza theme: tiny and fried pieces of pizza dough, with a nice and well dressed tomato sauce and parmesan cheese on the top. Then, pasticcio di Carnevale: pasta in the oven with tomato sauce, ricotta and mozzarella cheese, tiny meatballs and, sometimes, sausage and boiled eggs. Naples’ frittata di pasta will serve it as a kind of tortilla, blending the leftover pasta with eggs, and finally eating it in slices like a pie.

For Easter, one of Naples's specialties is casatiello: a ringshaped salty cake with salami inside and whole eggs on the top. Also aubergines are very used in Naples cuisine: they can be fried, grilled, and eaten as a vegetable sidedish. Parmigiana di melanzane is a bake of layers of fried slices of eggplant (aubergine, very often coated in egg and flour, or in a light batter), alternated with mozzarella, tomato sauce and parmesan (parmigiano) cheese (a less common version does not include mozzarella). Another very characteristic vegetable in Neapolitan cuisine are the friarielli, a kind of tiny broccoli not boiled, but cooked with olive oil, garlic, salt and chilli.

Naples offers several kinds of unique pastry, the most famous of which is perhaps the babà, followed by choux (Neapolitans write it as sciù) and the Pastiera, a cake prepared for Easter. Another typical Neapolitan pastry is the Sfogliatella (riccia or frolla). Naples is also known for its ice cream (in Italian gelato).

Neapolitan food forms the basis for much Italian-American cuisine.

The so-called 'Neapolitan diaspora' - the great waves of emigration from Naples and southern Italy to the Americas, especially the United States, Canada, Brazil, and Argentina - was part of the pattern of large-scale emigration from Italy, in general, in the late 19th and early 20th centuries. Between 1876 and 1913, 11.1 million Italians left Italy. Depending on just how one defines the area under scrutiny - city of Naples, province of Naples, region of Campania, or all of southern Italy (including Sicily and Sardinia) — most reliable estimates claim that at least 4 million of those who left were from Naples or near Naples. [3]

Naples is served by the Naples metro, trams, buses and trolleybuses. Suburban rail services are provided by: