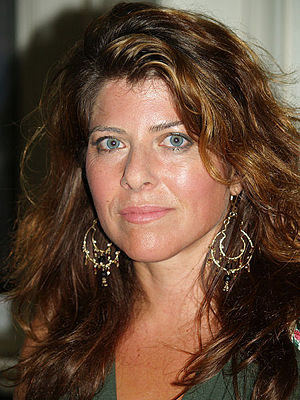 Naomi Wolf (1962-) is an American progressive, also described as libertarian, author who warned of serious danger to America's democracy from the federal government in the aftermath of the 9/11 attacks. She has written several books and is a contributor to the Huffington Post.

Wolf wondered how young persons could be accurately called citizens and complained that young people don't understand capital-D "Democracy".[1] She wrote in 2007:

This lack of understanding about how democracy works is disturbing enough. But at a time when our system of government is under assault from an administration that ignores traditional checks and balances, engages in illegal wiretapping and writes secret laws on torture, it means that we're facing an unprecedented crisis. As the Founders knew, if citizens are ignorant of or complacent about the proper workings of a republic "of laws not of men," then any leader of any party -- or any tyrannical Congress or even a tyrannical majority -- can abuse the power they hold. But at this moment of threat to the system the Framers set in place, a third of young Americans don't really understand what they were up to.[2]}}

The End of America

Her book The End of America described parallels between the United States and pre-World War II Germany including surveillance of citizens, extrajudicial detention, paramilitary forces, torture, and wondered whether America faced the prospect of fascism.[3] She said the National Counterterrorism Center had the names of roughly 775,000 "terror suspects" in February 2008.[4]

Conservative writer Michael C. Moynihan called the book "monumentally stupid", termed Wolf "America's most successful anti-fascist," and continues criticism of the Obama Administration as well as the George W. Bush Administration.He said she has "kind words" for libertarians in the Tea Party Movement for the libertarian participants in the Tea Party movement. He says she accuses President Obama of "being like Hitler" but does it very differently than Glenn Beck. When she says that "Obama has done things like Hitler did," she does it with an academic degree.

Every time I use those analogies, I am doing it with a concrete footnoted historical context. When people like Glenn Beck throw around the word Nazi without taking that kind of care, they are engaging in demagoguery. [5]

He said that when she attended a Ron Paul rally, she met met "a lot of 'ordinary' people, as in not privileged" and advises her fellow leftists to communicate with limited government plebs "by using language that anyone can understand even if you majored in semiotics at Yale."