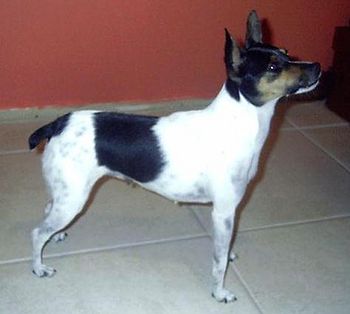 The Miniature Fox Terrier is a small, fine-boned, lightweight terrier developed as a hunting dog and vermin router. It is known colloquially in its native Australia as the “Mini Foxie”, the "Mini Fox Terrier" and sometimes as the “Little Foxie”. The alternate spelling "Foxy" is also seen.

It is akin to the Toy Fox Terrier, a breed that developed along similar lines in the United States of America. Some Toy Fox Terrier owners can trace their dogs’ pedigrees to "Foiler", aka "Old Foiler", the first Fox Terrier registered by The Kennel Club in Britain, circa 1875-6. [1] It is interesting that although the bloodlines of the Mini Foxie and the Toy Fox Terrier are apparently distinct, Australian and American dogs can bear startling resemblance to each other.

Other related breeds include the Jack Russell Terrier, the Rat Terrier, and the Tenterfield Terrier. These breeds can look very similar to the layperson, but when individuals are bred to the breed standards, the differences become apparent.

Today, many Mini Foxies are urban-dwelling pets, but there are still working Mini Foxies on properties across Australia. 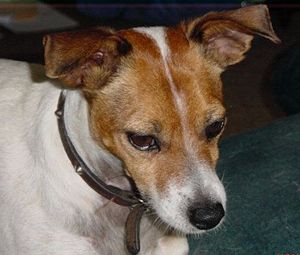 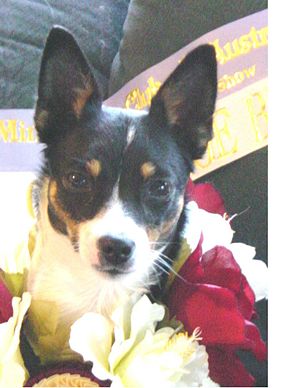 This breed is small; a maximum of 30.5 cm (12 inches) at the withers. Breed standards permit only three colour combinations: black and white, tan and white, and tricolour (black, white, and tan) and its coat is always short and fine. These dogs should appear generally square and be balanced and smoothly-muscled. They should give the impression of being confident and energetic.

The head of a Mini Foxie is distinctive, with erect ears that can stand straight up or fold just at the tips. Another distinguishing feature is its articulate, oval-shaped foot. The breed standard has always allowed for the dog's tail to be docked or undocked. Natural bobtails are known to occur. [2].

Mini Foxies are known for being fiercely loyal to their owners and their owners' property, a characteristic written into the breed standard. They must have a bold and inquisitive nature. According to the breed club, they make excellent family pets. They get along well with other animals but, like most terriers, cannot innately distinguish between small pets—such as reptiles and fancy rats—and vermin, and must not be left alone with such animals.

Miniature Fox Terriers are generally healthy and hardy despite their size. They need little maintenance; lightweight individuals and those that do not run on hard surfaces will need regular nail clipping. Luxating patellae, a common ailment among small breeds, occurs frequently among backyard bred dogs of this breed; the Mini Foxie Club of Australia insists upon health screening for breeding individuals to help eradicate it, and some breeders have not had luxating patella appear in their lines for years. The breed lives an average of 14 years, and much older dogs are not uncommon.[3]

Selectively bred terriers have existed in the British Isles since Medieval Times (see more at Terrier). The breed was most likely developed from crosses between smaller Fox Terriers and Fox Terrier types and Manchester Terriers, and, later, crosses to other toy breeds such as the English Toy Terrier and Whippet.[4] Hunters were evidently seeking a smaller, speedy Fox Terrier that could be used for hunting smaller pests such as rats and rabbits, and there were limits on the size of dog the lower classes could own, and so these hunters became unwitting selective breeders of littler terriers. Indeed, the refining of the Miniature Fox Terrier appears to have occurred concurrently with the development of the Smooth and Wire-haired Fox Terriers. Although the origins of the breed are English, the breed as we know it today was developed in and is endemic to Australia. The pictorial and photographic record is clear and interesting. Dogs of unmistakable Miniature Fox Terrier type were painted by notable 19th Century British animaliers, and early Australian photographs also show that a distinct breed type had emerged. [5] By the late 1800s, the breed type was clearly identifiable, where the Little Fox Terrier proved its worth against rabbits, rats, and snakes on Australian farms. Mini Foxies demonstrated tenacity, endurance, and extreme loyalty to their owners; the dogs were routinely taken on the hunt, were sometimes used in search parties [6], and were used at Sydney’s North Head Quarantine Station, the Riverstone Meat Works [7] and the Brisbane City Council [8] as vermin exterminators. Anecdotal evidence suggests that the mortality rate of these dogs was very high, with huge losses due to snake bite.

The dog’s vigilance, size, affectionate temperament, and ease of care soon resulted in its becoming a popular choice in urban centers as well, and by the 1920s the Miniature Fox Terrier was iconic. So well known and popular was the “Little Foxie” that very little thought was given to the need to preserve its lines. [9]

History of the breed club

By the 1980s, the interest in dog fancy, the possibility of breed-specific legislation aimed at eliminating the breeding of non-Canine Council affiliated dogs, and increasing concerns about the need to protect purebred dogs led a group of enthusiasts to begin meeting informally to consider the future of these little dogs. Early in the 1980s some dog owners met with representatives of the Royal New South Wales Canine Council (DogsNSW) Wes Stacey, the late Dr. Harry Spira and the late William Polley, OAM, at the St. Ives Showground to discuss the parameters of the breed and possible Australian National Kennel Council (ANKC) recognition. [10]

In 1991, fanciers in South Australia also formed a breed club. For these dog owners, official recognition of the dog by the Australian National Kennel Council was the most important of their goals. At that time, challenges to the name “Miniature Fox Terrier” were being mounted, usually by standard Fox Terrier owners, and threatened to preclude recognition by the all-Breed club. These South Australian club members joined with some owners in Western Australia and organized as the Tenterfield Terrier Club of Australia (1993), a name which was first used by a television personality of that era. The ensuing breed standard for the Tenterfield Terrier differs in substance from that of the Miniature Fox Terrier, and though the two dogs are sometimes confused, they have been developing along divergent lines for over twenty years and are now different breeds. An October, 2005 directive from the ANKC placed a moratorium on the registration of any MFCA-registered Miniature Fox Terrier as a Tenterfield Terrier. [11]

The breed is not recognized by the Australian National Kennel Council but ANKC judges may judge them.

In 2005, the Mini Foxie was added to the list of dog breeds recognized under the NSW Companion Animals Act.

Mini Foxies have been successfully exported overseas, but they are still relatively unknown outside of Australia, although renowned in their native land. Several parliamentarians made reference to the breed during 2004 legislative hearings on canine issues. ‘Pasqua’ and ‘Fergus’ owned by Anthony Field of The Wiggles, are Mini Foxies, and Ian Thorpe, the Australian swimmer, has spoken fondly of Tiny, his Miniature Fox Terrier, in several interviews. Sean Carlow, Australian men's figure skating champion (2005-2007), owns a Miniature Fox Terrier, and television and print features on Toby Allen for his 2006 Dancing with the Stars (Australia) campaign spotlighted his Mini Fox Terriers.

Today, the Miniature Fox Terrier is still very much a working terrier on farms across Australia. They remain popular as pets, and enjoy playing the pampered pooch. As long as their active minds are kept stimulated with games or toys and they receive at least moderate exercise, they make excellent urban and apartment dwellers.

Miniature Fox Terriers generally have small litters. This experienced dam (mother of puppies) whelped three pups. Secure in her whelping area, she looks at the photographer (who is well known to her) without any sign of fear or aggression. A stranger should never approach a dam with puppies.

In the second photograph, an experience breeder is examining a puppy. She will check the puppy’s conformation (how well it conforms to the breed standard) to the extent she can (some aspects of conformation are not apparent until the dog is many month old). She will also check and continue to monitor each puppy’s health and soundness.

The strict breeding rules of the MFCA discourage people just interested in casual breeding or in making fast dollars. MFCA-registered breeders must agree to rest a bitch between litters and not to breed from an immature bitch or one in questionable health.

In addition to its breeding requirements, the MFCA requires that mature dogs are checked by a veterinarian and reviewed by Committee before being certified for breeding. This system, combined with the fact that Miniature Fox Terriers have small litters, has meant that breed numbers grow slowly, but MFCA representatives say that the payoff is in sound dogs of excellent quality.

Mini Foxies must be shown in their “natural state”, that is, they may be bathed, brushed and neatened, but no excessive grooming is allowed. Because the MFCA is an independent club, Mini Foxies are not shown at ANKC all breed shows, but rather at independent specialty and combined shows with other breeds. In addition to the conformation events, MFCA shows hold classes for de-sexed dogs (spays and neuters), breeder specialties such as Breeder’s Group and Parent and Progeny competitions, and novelty classes. (Interestingly, affiliated breed clubs have also begun to contest de-sexed dog competitions, and the dog show at the Sydney Royal Easter Show introduced a Breeder’s Group in 2007.)

Attendance at MFCA shows has increased dramatically over the last five years: the 2007 end-of-year competition was so large that the MFCA Committee are considering splitting the competition in 2008. [12]

Mini Foxies have not been greatly involved in field trialling; presumably show dog owners are not interested and working dog owners too busy to enter. Mini Foxies are quick learners and they do well at dog obedience; it would seem that they would be well suited for agility, but again, there has not been a history of agility trials in the MFCA. Recently, there has been a surge of interest in lure coursing, and the Mini Foxies seem to take to it.

See the article Fox Terrier, for a general history of the dog type, and additional details on history, genetics, coat color, and so on.