Michele Bachmann (1956-) is a Republican U.S. Representative from the state of Minnesota), first elected in 2006 and quickly rising to national prominence as a combative and charismatic social conservative and member of the Christian Right. She was a founder of the Tea Party Caucus in Congress and has positioned herself as an national Tea Party movement leader, although she does not appear to have participated in the formation of local groups. Rep. Bachmann has been suggested as a Republican presidential candidate, sharing a good deal of personal style and supporters with Sarah Palin. 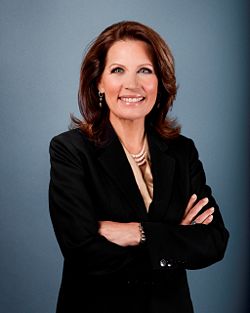 Caucuses and other groups

With a secure seat, she endorsed and campaigned for other conservative candidates around the country, many members of the Tea Party Movement.

After calling for a protest on Sean Hannity's television show the previous week, saying "she hoped viewers would come to her press conference and then walk through the congressional office buildings, "up and down through the halls, find members of Congress, look at the whites of their eyes and say, 'Don't take away my health care.'"[1] On 5 ovember 2010, she held a rally at the U.S. Capitol. Officially, it was a press conference and not a rally, since there was no demonstration permit; an estimated 5 to 10,000 supporters attended. It was formally directed at rejecting the health care bill to be voted on, in the House.[2] House minority leader John Boehner, appearing on the platform said "This bill is the greatest threat to freedom that I have seen," (R-Ohio). Rep. Todd Akin (R-Missouri) asked for the Pledge of Allegiance because "it drives the liberals crazy" to hear the "under God" part. Minority whip Eric Cantor also appeared, as did Representatives Steve King (R-Iowa), Paul Broun (R-Georgia), Jean Schmidt (R-Ohio) and Bill Cassidy (R-Louisiana). Andrea Shea King and Kristinn Taylor provided media support.

She was scheduled to be a featured speaker at the February 2010 convention of Tea Party Nation,[3] but has withdrawn, citing concerns with the disposition of the proceeds by its organizer, Judson Phillips. Phillips has said he expects to make a profit on it, but many activists are complaining about the $550 ticket price and the $100,000 speaker fee to be paid to Sarah Palin. [4]

She started the Congressional Tea Party Caucus, and was candidate for the chair of the Republican Leadership Conference, the fourth-ranking member of the Republican leadership.[5] A leadership role that historically involves building consensus, however, may clash with her strong ideology. The Washington Post suggests she is unlikely to win the post, as she lacks House seniority and a strong following there, although she is nationally visible.[6]

She said she belongs in the leadership because it needs a constitutional conservative such as herself.

Rep. Jeb Hensarling of Texas, and top Republicans are making it clear that he is the insider’s choice. Minority Whip Eric Cantor of Virginia and outgoing Conference Chairman Mike Pence of Indiana already have endorsed Hensarling, sending a clear message that if Bachmann wants the job, she’s going to have to run an insurgent race for it. [7]

Hensarling has been introduced by established conservatives such as Paul Ryan of Wisconsin, who wrote "Jeb's economic expertise and strong ability to communicate are what we need in our conference chairman to articulate our unified commitment to get our country back on track. This position requires someone who has a command of these issues and has a history of successfully debating them.”[8]

Hensarling also picked up the support of Rep. Spencer Bachus (Alabama), who is the top Republican on the House Financial Services Committee. “In his role as Chairman of the Republican Study Committee, Jeb has earned nationwide respect for his opposition to socialized health care and strong advocacy for fiscal responsibility and smaller government” [8]

Bachmann's appeal to fellow Republicans is based not on her House leadership experience, but what she brings from the election:

strong principled conservative values, a proven level of experience, effectiveness with our friends in the local and national media, and an energetic national constituency that reflects the results of Tuesday night. It is important that our conference demonstrate to the people who sent us here that their concerns will be tirelessly advanced at the table of leadership. [8]

On 10 October, she gave up her campaign and endorsed Hensarling.

"Jeb Hensarling has my enthusiastic support for his candidacy to become Republican House Conference Chair. Jeb has demonstrated his commitment to limited government, reduced spending and lower taxes, and he will be a strong voice for the Tea Party's call for these values.[9]

At the present time, a number of political analysts see Bachmann and Sarah Palin as strongly attractive to the more conservative wing of the U.S. Republican Party, both being charismatic women who appeal to strong emotion in the political "base". Some note that on the other end of the political spectrum, Nancy Pelosi also appeals to the base, although she has much more actual political power; while Barack Obama is certainly liberal, he positions himself more centrally than Pelosi.

She is associated with Christian Right groups including Tony Perkins and the Family Research Council, as well as James Dobson and Focus on the Family.

Bachmann ran for Congress after six years as one of the most socially conservative members of the Minnesota state senate.[11] She is a member of the Republican Study Committee, the House conservative caucus.

In 2006, she appeared with George W. Bush, accepting his endorsement[12]

Before she held elective office, in 1993, she helped to start a Stillwater, Minnesota, charter school that ran afoul of many parents and the local school board due to conflicts over church-state separation but receiving public funds. "After Bachmann and company were driven out of that venture, she became a prolific speaker and writer on the evils of public education in the years leading up to her failed school board run. By all accounts, she made herself into a formidable presence. She's articulate, attractive, and speaks passionately," says Mary Cecconi, who spent eight years on the Stillwater School Board. "Actually, she is ferocious."

"On the stump in 2006, Bachmann still calls education reform one of her "number one priority" issues, along with tax reform and homeland security." Her critics, including non-evangelical Republican, mention religious conservative think tank called EdWatch.[12] Bachmann homeschooled her children, including 23 foster children, saying they were failed by the public-school system.[13]

She twice introduced a state constitutional amendment to ban same-sex marriage and then organized a “Minnesota for Marriage” rally in which she told supporters to flood the state Senate and directly protest to opponents of the bill.[14]

Bachmann has called homosexuality a sexual “dysfunction” and accused the gay community of targeting children. [15]

Bachmann is strongly against the "cap and trade" proposals to alleviate global warming, which she describes as being "just another tax on business"[16]. Global warming, according to Bachmann, is "all voodoo, nonsense, hokum, a hoax".

Bachmann has advocated drilling in the Arctic National Widlife Reserve (ANWR), calling it "commonsense" and stating that "we know that nine months out of the year this area is hidden under snow and ice and three months out of the year the area is covered in complete darkness". Bachmann also stated that the Congressional Democrats which oppose ANWR drilling are "standing in the way of $2-a-gallon gas"[17]. A 2008 report by the Energy Information Administration casts serious doubt on such a prediction - with between $0.41 and $1.44 reduction in the price of oil per barrel. The report also states:

Assuming that world oil markets continue to work as they do today, the Organization of Petroleum Exporting Countries (OPEC) could neutralize any potential price impact of ANWR oil production by reducing its oil exports by an equal amount.[18]

At the time of Bachmann's article, the Energy Information Administration reported that the "weekly U.S. regular conventional retail gasoline price" was $4.00. Since then, gas prices dropped and bottomed out at $1.59 on the 29 December 2008, but have risen in the year since to $2.59 (November 30, 2009)[19].

She has been vehemently opposed to the Obama Administration's health care proposals, and has supported Tea Party Movement protests to "kill the bill" (see below), and has called it "tyranny". Speaking on the CBS News program "Face the Nation", she said, on 28 March 2010,

"At no time during this period was the United States' GDP 100 percent private.

Her communications director, Dave Dziok, explained the 51 percent estimate as coming from William Boyes, an economics professor at the W.P. Carey School of Business at Arizona State University, "who estimates that the government now owns or controls businesses that generate about one-third of U.S. economic activity. With the passage of the health care bill, which makes up about 18 percent of the economy, government’s involvement in the private sector has eclipsed the 50 percent threshold."

Dziok wrote that the 100 percent figure "...has nothing to do with the numbers...from the Bureau of Economic Analysis regarding the level of government spending as a percent of GDP. She was stating the fact that the federal government has seized control of private businesses like General Motors and AIG. She wasn’t talking at all about government spending."

She also said "The New England Journal of Medicine released a survey the week that President Obama signed Obamacare stating that over 30 percent of American physicians would leave the profession if the government took over health care. That's very serious going forward."

CBS, however, said the New England Journal of Medicine has denied it conducted or published the survey cited by Bachmann. Dziok responded, in an email, "I know they’re doing what they can to distance themselves from the survey done by Medicus, but the fact of the matter is the New England Journal of Medicine has lent both its name and crest to the newsletter in which it was published."

During the 2008 campaign, on October 17, she suggested, on MSNBC, that that being liberal was "anti-American," and, according to many listeners, implied this to Barack Obama; Bachmann said that the media should investigate members of Congress to see if they were "pro-American" or 'anti-American."[21] Colin Powell said that he had endorsed Obama, in part, due to comments such as hers, which he regarded as needlessly divisive.[22]

A week later, she said "I did not say that Barack Obama was anti-American, nor do I believe Barack Obama is anti-American. He loves his country, just as everyone in this room does...Nor did I call for an investigation of members of Congress for their pro-American or anti-American views. That is not what I said." [23]

Bachmann explicitly refused to endorse John McCain's presidential campaign in 2008, telling the West Sherburne Tribune that McCain "is not my man. Our candidate was chosen by the media"[16].