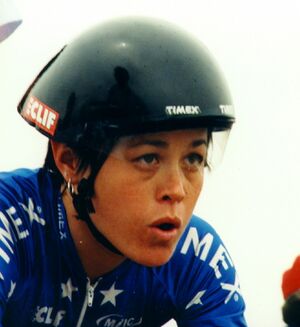 Mari Holden intently focuses on the time trial course during the 2000 Women's Challenge.

Holden's initial foray into competitive athletics was as a triathlete. She was a two-time member of the U.S. Junior World Triathlon team, and was named Junior Triathlete of the Year in 1991 by the Triathlon Federation USA. That same year she finished seventh in the Junior Triathlon World Championships.

She began cycling with a club in high school as part of an overall fitness program centered on triathlon, and did not make competitive cycling her athletic focus until 1992 when she moved to Colorado Springs and began training with the U.S. National Cycling Team, initially to improve that aspect of her triathlon. At that time, she also transferred to Colorado State University where she majored in philosophy.

Holden's results that year highlighted a problem for her career. Whether fairly or otherwise, she had gained a reputation as a time-trial specialist who did not have the kind of all-around riding skills necessary to rise to the very top in her sport.

Over the next few years, Holden raced in Europe in order to prove herself on the international stage and to develop as a complete rider. In 1999, she clearly demonstrated her success in this endeavor by finishing second in the strong Women's Challenge against an international field and finishing in the top 10 in the Grande Boucle, one of the toughest and longest women's races of all time.

The following year, she had her biggest racing successes, winning a Silver medal at the Olympics, followed by a victory two weeks later in the World Time Trial Championships in Plouay, France.

That same year (2000), Holden was elected to serve on the Board of Directors of the USA Cycling as the elected female athlete representative, a post to which she was re-elected in 2004. In addition, she formerly served on the Athletic Advisory Committee to the U.S. Olympic Committee and was an Athlete Ambassador to the U.S. Anti-Doping Agency.

Currently, Holden resides in Encinitas, California where she coaches and holds cycling clinics and cycling camps as well as serves as a consultant to several firms on women's cycling issues and products. She was called one of the "greatest ambassadors in the sport of cycling" by Ride Magazine (March, 2008).