Luigi Meneghello, Malo (Vicenza province, Italy), 1922 - Thiene 2007, is a contemporary Italian writer. His debut as a novelist was relatively late, in 1963, with the publication of Libera nos a malo. Before this first literary work, his production was only essay-writing.

Meneghello is generally viewed, and views himself, as a writer that kept outside all literary currents. In a recent interview[1], he states: "when I started writing I was convinced, thought I may have been wrong, that our literature was out of phase with respect to the Italian reality [...] anytime I started dealing with a new argument, I always kept distant from mainstream genres". His approach to autobiographic themes, as expressed especially in Libera nos a malo, is indeed completely original: rather than having a plot, the novel is in fact a multi-language collection of episodes (Italian, venetian dialect and, seldom, English). Later, his description of the Resistance movement in I piccoli maestri is radically different from that of other Italian writers (e.g., Italo Calvino, Cesare Pavese, Elio Vittorini, Beppe Fenoglio) in being deliberately un-commemorative and anti-rhetorical. 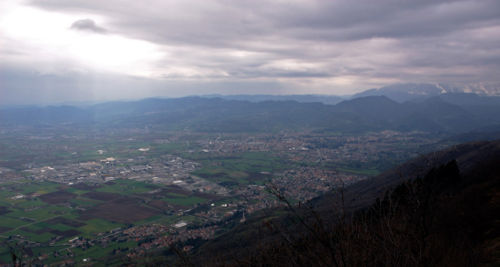 Luigi Meneghello was born in 1922; his mother was a primary-school teacher, his father an artisan that owned a small carrier business along with his brothers. His birthplace, Malo, was then a rather large village of the Vicenza province, in northern Italy, mostly populated by farm workers and artisans: his family was thus, though not rich, relatively well-off. Life in the village of Malo is described by the author in his autobiographic novels (Libera nos a malo[3] and Pomo pero[2], chiefly) and in the interview by Mazzacurati and Paolini[1]. His early education (first three years at the primary school) was given to him at a private catholic school in Malo, but religious influence was pervasive in the Veneto region well beyond the education of children. The presence of religious figures or pious characters is thus common, especially in autobiographic works, but Meneghello does not describe himself as a religious man. The other main component of the cultural environment during his first years was fascism. Meneghello was first 'balilla' and then 'avanguardista' (names of organized young fascists) but did not develop a critical and personal political thinking until University times. After high school in Vicenza, where he begun classical studies, in 1939 was at the University of Padova. The second World War would begin, for Italy, just the year after. Meneghello's shift from a vague support to the fascism to a clear antifascism is dated to the summer of year 1940, after his encounter, in Padova, with the antifascist Antonio Giuriolo. Meneghello considers this event "the critical turning point of my personal life and the conclusion of my education" (Caputo F. in [2]).

In January 1943, Luigi Meneghello was called to war. He was first trained at Merano and then sent to Tarquinia, in central Italy, where he remained until September, 8th without taking part in combats. With the armistice, Italian troops were dispersed, and Meneghello returned to Malo. Soon, he got back in contact with Antonio Giuriolo and entered the Resitance, first, in the mountains north of Belluno, then in the Altipiano di Asiago, in the hills just south of Malo, and, in the winter of year 1945, as an organizer in Padova. According to his novel,[4] he was among the first to receive the English troops entering Padova. His experience at war and in the Resistance is described in I piccoli maestri. [4]

Luigi Meneghello married with Katia Bleier in 1948. The writer and his wife Katia, who appears simply as "K." in some writings, remained united until Katia's death in 2004.

After a short period of political activism that achieved irrelevant results, Luigi Meneghello was offered a job at the University of Reading, UK. He remained there for 33 years, and was the director of a newly founded "Department of Italian studies" from 1961 to 1980. He is now definitively settled in Thiene, a medium-sized town north of Vicenza, Italy.

His literary activity begun with essays, translations and book reviews in English and Italian journals. Some of his early works appeared under a pseudonym, Ugo Varnai. But the success arrived only in 1963, with the publication of his first "novel", Libera nos a malo. I piccoli maestri was published only one year later, and these two novels are still the most beloved and known of the author. Literary production continues to the present days.

Meneghello's literary style has some unique characteristics, the most obvious being his usage of the language. He makes indeed large use of the venetian dialect not only because this was his language during childhood and youth, but also because some concepts are implicit in words of the dialect, or in dialect' usage, and cannot be translated accurately in any language ("a word like 'birdie' could not be wrote: it just existed [...] the question if the 'birdie', even if correctly written, was the same thing of the birdie of the dialect, still remain unsolved"[1] and also: "when a language disappears, not only certain alternative ways to say things are dying, but things themselves disappear"[2]). The way Meneghello worked out this problem of communication (i.e., concepts of the venetian dialect cannot be communicated to people outside the Veneto region) was the transport, as opposed to translation: Meneghello created inexistent Italian words that sound like 'italianized' dialect words, giving back the taste and implicit significates of the dialect that would be lost in translation. The exercise then evolved into the 'translation' (transports, in fact) of English poetry directly to the venetian dialect[5].

Another constant in Meneghello's works is the autobiographic component, which is particularly evident in the so-called "books of Malo", i.e., Libera nos a malo and Pomo pero.

This is Luigi Meneghello's first novel, published in 1963. The title is the last line from the Christian "Lord's Prayer" ("Our Father") -- "deliver us from evil" -- in Latin, and hints at an episode described in the book: an inhabitant of Malo used to listen to the Latin prayer, and to misunderstand the last line as "free us from dung" (there could be, indeed, an assonance with this sentence in dialect).

The book describes the author's life in Malo during his childhood and youth. The structure of the book, however, could hardly be reconciled with that of an autobiographical novel. The book consists of mostly short and disconnected episodes, written in a language making much use of dialect and of tranported words. While the point of view of the narrator is that of a child, the language is often sophisticated, resulting in a completely original literary style. Footnotes, collected in a chapter at the end, constitute a significant part of the book; here, however, the point of view is that of the author who writes about his own novel in the same style as the novel itself. Notes were given the same great importance in the second of the "Books of Malo", Pomo pero, which was wrote as a complement to Libera nos a malo.

This is Luigi Meneghello's second book, published only one year after Libera nos a malo. Like his previous book, I piccoli maestri is strongly autobiographical, and describes the author's experience in the Resistance. This novel indeed completes a rich current of Italian literature of the 20th century, i.e., the literature of the resistance. The structure of the book is more traditional, and the use of the language less experimental than in most of the other works of the author, and this is probably the reason why this is his only book that has been translated. Meneghello's story in the Resistance movement was not much different from that of many other Italian Resistance writers; nonetheless, the way Luigi Meneghello develops the theme is totally original. The most important difference is the deliberate anti-rethorics. As other Italian writers, Meneghello seems to be aware that the Resistance was an attempt to refound Italy on the basis of a morally sound basis, and his anti-fascism is esplicit. But, contrary to other writers, he appears skeptical about the results of this attempt, both during the war and after, at the beginning of the Italian Republic. He describes himself and his group as unable (or unfit) to conduct the war. His vision of the Partisans may be summarized by one of the last dialogues of the book, when the young Luigi Meneghello meets the English troops entering Padova. "Who are you?" asks an English soldier, and the writer answers, "F---ing bandits"[4]. Hence the title of the English translation of the book (The outlaws).[6]