From Citizendium
(Redirected from Low-light television)
Jump to: navigation, search

Night vision devices (NVD) use various techniques to allow a person to see under what otherwise might seem dim or totally dark conditions. NVD, often in the form of night vision goggles (NVG), is an unfortunate term, because, in military usage, NVD/NVG refer to specific technologies for viewing.

The first generation were active, illuminating targets with an infrared light source. Passive "NVD", also called "starlight scopes", amplify low levels of visible or infrared light, such starlight on a moonless night, but will not work in a truly darkened building or heavily covered area outside. When operating in the visual range, they are called low-light television. Passive infrared viewers of this generation and the next may also be called forward-looking infrared.

Third-generation infrared thermal viewer devices detect the heat from the target, such as a living body or an engine, and need no external source of light in any wavelength.

Early U.S. designations, such as the M3 Sniperscope, included both a rifle modified to hold the infrared viewing system. A sniperscope, required a source of infrared light. Often, such a device had two side-by-side tubes, resembling a flashlight and telescope clamped together. The early versions also needed a rifle modified to hold the equipment. Later technologies do not require an "invisible spotlight" such as were used on the early "sniperscopes" in the Second World War. [1]

Further, while the illumination was invisible to the unaided human eye, to an enemy looking through a viewer, the illuminator showed up brilliantly, making its user a target. 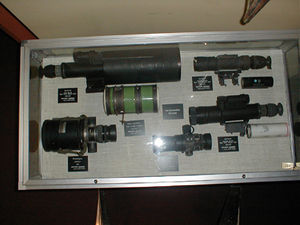 The next generation no longer needed a light source, greatly reducing the weight and increasing the battery life. They worked by amplifying very small amounts of visible or infrared light, such as starlight on a moonless night. Still, they did depend on a natural source of light, so they stopped working in buildings or under heavy cover.

Still, some objects may not be very reflective, so combat aircraft, the B-52 again being an example, have the LLTV and FLIR side-by-side.

Forward-looking infrared devices of this class principally work in the near-infrared; it is the next generation that goes into the mid- and far-infrared.

The U.S. versions of the passive amplifiers were made with more flexible clamps, so they could go on a standard rifle or used as a standalone viewing device. The AN/PVS-1 Night Vision Sight “Starlight Scope” reduced the weight dramatically, to 8 pounds, and went into service in 1965. It suffered from the problem of being "dazzled" by bright lights, which included flares and fires on a battlefield. Battery life, which had been short for the active systems, increased to 100 hours. By 1969, the AN/PVS-2 cut weight down to 6 pounds, had longer battery life, and was not dazzled by bright light.

If the device has light detectors sensitive to different colors (e.g., red-blue-green) LLTV gives color images, as opposed to the monochrome of passive NIR.[2]It thus can provide more information, as well as sharper views than a passive infrared viewer that uses longer wavelengths.