A Littoral Combat Ship (LCS) is a United States Navy warship intended to reverse the Cold War trend towards large, expensive warships optimized for open-ocean operations. As opposed to fast attack craft, it is capable of transoceanic voyages to reach its operational area, but, once there, is optimized for littoral warfare in coastal waters. LCS are ships of approximately 3,000 ton displacement with a crew of 40 plus mission-specific specialists. In comparison to LCS, the extremely competent, multirole Burke-class destroyers are in excess of 9,000 tons with a crew of 300-400 sailors. 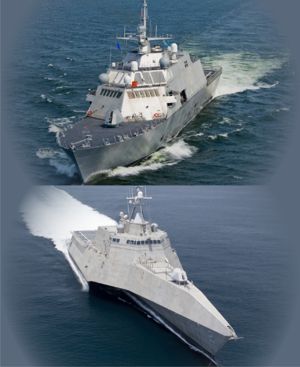 There are two prototype classes being built by different design teams, but they share the ability to be quickly (1-4 days) reconfigured with mission modules for mine warfare (MIW), anti-submarine warfare (ASW), and anti-surface warfare (ASuW). Although small, they will always have the capability to operate helicopters and unmanned aerial vehicles (UAV).

While bringing new capabilities, they are also seen as replacements for the 30 FFG-7 Oliver Hazard Perry-class frigates, 14 Avenger-class mine countermeasures vessels, and 12 MHC-51 Osprey-class coastal mine hunters.[1]

115 to 127 meters long, the ships are close to the size of a British Type 23-class frigate, but differentiate from frigates, both British and the Perry class, by having much higher speed, and also shallower draft for inshore work. Like some frigate types, they lack air defense capability beyond self-defense, which was conceived, in 2003, as being provided by next-generation U.S. DD(X) destroyers and CG(X) cruisers. The cruisers have been cancelled; it is unclear if the newly defined Flight III version of the Burke-class meets the DD(X) requirement.

Modularity in warships was pioneered by the Danish Flyvefisken class, also called the Standard Flex 300. [2] Israel had considered participating in the LCS project, but ruled out modularity, and now plans to procure German MEKO-class ships.

LCS is described as a "relatively" inexpensive ship, but the first two are in the USD $500 million range. U.S. Marine Corps analysts observe that for each two LCS, one Landing Platform Dock (LPD) of the San Antonio-class could be acquired. An LCS can carry 25 passengers, which could be appropriate for United States Navy SEAL operations, but the Marines have not been involved with the development and it does not support their Force Reconnaissance doctrine.

The Joint High Speed Vessel (JHSV) is similar in being a high-speed ship designed for the littoral, but otherwise quite different. The JHSV is a transport ship built to commercial standards, while the LCS is a warship with naval damage resistance. In littoral operations, however, LCS would be a plausible escort for the JHSV.

Like the JHSV, the LCS is largely being built to commercial, not military, survivability standards. As opposed to a Perry-class ship such as the USS Stark, which was hit by Exocet missiles in the Persian Gulf, LCS has neither the systems nor enough sailors for major damage control; this appears to be a basic assumption.

One critic, Commander (ret) John Patch, observes that Australia has been upgrading its Perry frigates, and mentions that one alternative is restarting production of an upgraded Perry design. Other options include cutting the LCS back to a single-purpose, lower speed ship with self-defense and helicopter-support capabilities. He agrees that the helicopter is essential to antisubmarine warfare, mine warfare, and anti-surface warfare development. Yet another alternative would be to shift funds to a corvette based on the Coast Guard’s National Security Cutter hull.[3] Patch's arguments triggered extensive discussion on the blog of the United States Naval Institute.

Some interesting observations in the discussion, by several authors, was that the LCS is fundamentally new in a way not often discussed: it is the first dedicated mothership not only for unmanned aerial vehicles, but for unmanned undersea vehicles. It is also a small mothership for helicopters; many discussions underestimate the importance of helicopter-carried systems for LCS operations. Analogies were drawn to the first U.S. aircraft carrier, USS Langley (CV-1), which was clearly experimental. There seemed to be general agreement that the "hotel services" for personnel were too small and needed to be increased. [4] 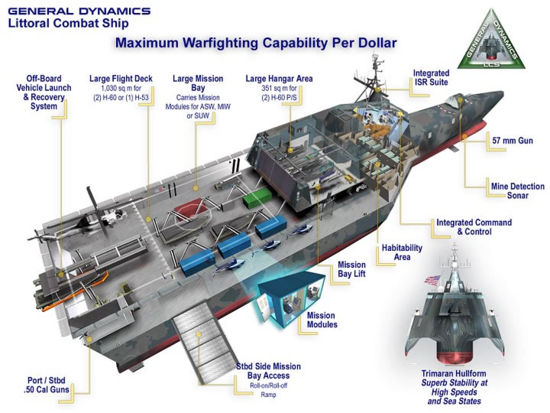 Separately from the modules, there is a launching and retrieval ramp on the stern deck, as well as a side hatch. This will allow all configurations to launch special operations boats and remotely piloted vessels. The side ramp also can handle Stryker wheeled armored vehicles. Internally, there is a three-axis crane over the area near the side hatches, for efficient movement of equipment inside the modular storage area.

There are hangars for two MH-60 helicopters, but the landing area is sufficient for the large CH-53 Sea Stallion heavy-lift, MH-53 PAVE LOW special operations helicopter, which is being replaced by the V-22 Osprey. They also are using the MQ-8 helicopter UAV, three of which will fit in the hangar space of one MH-60.

In all configurations, the vessels have a light 57 mm autocannon that can still provide close-in naval gunfire support as well as engaging surface and air targets. They also carry lighter autocannon and RIM-116 Rolling Airframe Missiles for self-defense against aircraft and cruise missiles. The ships are also designed to mesh into military electronic networks.

For surface warfare, either a pair of 30mm guns, or a surface-to-surface missile module can be carried. Gun Mission Module MK 50 MOD X consists of two modules:

For missions where the 57 mm cannon does not provide sufficient range, the Non-Line-of-Sight Launch System with Precision Attack Missiles (PAM), developed as part of the Army's cancelled Future Combat Systems, has been discussed as the base for anti-surface warfare.

Military news sources, however, suggest the cheaper Griffin missile missile is being considered. In its present form, the Griffin is shorter-ranged than the PAM. It was intended as a replacement for the AGM-114 Hellfire launched from unmanned aerial vehicles, and reuses components from the FGM-148 Javelin anti-tank and AIM-9X air-to-air missiles, and is in competition for the Joint Air-Ground Missile procurement. Raytheon makes both systems. [6]

With the cancellation of several projects, the entire ASW module is under redesign. It may share some sensors with the mine warfare module. Increment I development, integration, test, and procurement plans were ended in Fiscal Year 2010.[7] A new Increment II design is in process.

Both contractors were to build prototypes. Lockheed Martin was to build two ships, LCS 1 named USS Freedom and LCS 3 to be named USS Courage. The other two, by General Dynamics, were to be LCS 2 named USS Independence and LCS 4 to be named USS Liberty. While the performance of the two prototype classes is intended to be in the same range, the hull forms are quite different. Lockheed Martin's is a single hull that "semi-planes", or moves partially out of the water at high speed. The General Dynamics approach is a multi-hulled trimaran, based on a design from the Australian firm, Austal. Austal USA also builds the Joint High Speed Vessel. The Freedom class has a hangar, flight deck, and mission bay half the size of that on the Independence, but does have full-size Mark 41 vertical launch system tubes capable of taking fleet RIM-156 Standard SM-2 area air defense, RIM-162 ESSM medium-range air defense, or BGM-109 Tomahawk long-range cruise missiles. Area air defense and land attack, however, have not been considered core LCS capabilities. Both air defense missiles also have anti-surface warfare capability.

The lead ships USS Freedom (LCS 1) and USS Independence (LCS 2) have been built. LCS 1 was commissioned in November 2008, following LCS 2's commissioning in October. These are Flight 0 vessels. In January 2007, the U.S. Navy stopped work on LCS 3 due to cost concerns, and terminated the contract in April. LCS 4 was also cancelled in October 2007.[8] New production will be of Flight 1.

Secretary of Defense Robert Gates, in presenting the proposed Defense Department budget on April 6, 2009, said "We will increase the buy of Littoral Combat Ships (LCS) – a key capability for presence, stability, and counterinsurgency operations in coastal regions – from two to three ships in FY 2010. Our goal is to eventually acquire 55 of these ships." To increase availability, each ship will have two crews, "Blue" and "Gold", which will take turns manning the vessel at sea. This approach has been used successfully with submarines.

USS Freedom completed an initial deployment, assigned to United States Southern Command, in February-April 2010. She was configured with two Gun Mission Modules and a Maritime Suecurity Module, and successfully carried out drug interdiction operations. [9] On a subsequent Pacific deployment, the small crew was a concern, with some officers, during a training exercise, mentioning that they might get 4 hours sleep in 36-48.[10]

A re-evaluation of the competition between Lockheed Martin, and the new group of General Dynamics, and Austal USA, resulted in a new procurement strategy. Rather than buy 19 vessels from a single vendor, 10 each would be bought from both vendors at an initial fixed price of $430 million, fixed-price contract to each company to build one apiece of their ships through 2015. [11]