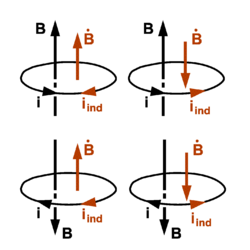 In electromagnetism, Lenz' law states that a change in magnetic flux Φ (magnetic induction B integrated over a surface S, see this article) gives an induced current that opposes the change in flux.

For the sake of argument we consider the case of a time-dependent magnetic induction B(t) passing through a time-independent surface S. Further we assume that B(t)is homogeneous over the surface, so that the flux is a simple product. Faraday's law of magnetic induction states that the electromotoric force (EMF)

is given by (SI units)

By Ohm's law the induced current iind is a constant (the conductivity κ) times the EMF,

That is, the time derivative of B(t) induces a current iind in a conducting loop. Due to Lenz' law (that is the presence of the minus sign in Faraday's law), the direction of iind is such that the change in the field B(t) is opposed.

The law is named for the Estonian-born physicist Emil Lenz (1804 – 1865), who published his law in 1834, shortly after Michael Faraday's 1831 discovery of currents induced by moving magnets. Lenz enunciated his law as follows: when a conducting circuit is moved in a magnetic field, the induced current flows in such a direction that the force on it tends to oppose the motion.