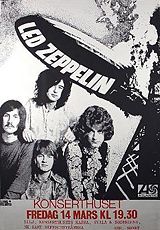 The 1969 tour of the United Kingdom and Scandinavian was a concert tour of England, Wales, Denmark and Sweden by the English rock band, Led Zeppelin. The tour commenced on 1 March 1969 and completed on 17 April 1969, although there exists unconfirmed reports the band appeared in additional shows during this time.

In the course of this tour, Led Zeppelin elicited an allotment of live television performances, comprising one recording in Denmark on 17 March,[1] a session at BBC TV studios on 21 March [2] and a session at Staines on 25 March,[3] the culminating for the filming of the Supershow. These anteceding filmed sessions were constituent of manager Peter Grant's strategy to create public cognizance of the band. However, his despondence with the medium (specifically its inadequate audio dynamics), would in due time influence him to make the group unavailable for television again, including offers from The Tom Jones Show and Top of the Pops.[4]

Led Zeppelin's debut album was tardily released in the United Kingdom part-way through this tour, in late March 1969.

The fairly typical set list for the tour was:

There were some set list variations, substitutions, and running order changes during the tour.