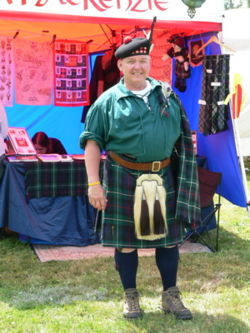 The modern, tailored kilt which is ubiquitous at Highland Games gatherings around the world has associated with it an evolving style of wear. This style includes the accessories and other acoutrements which are typically worn with it. In this sense, it is very much like other items of the fashion world.

Along with this development, a range of opinion concerning proper, appropriate, or even correct styles has also developed. Attitudes range from those who hold very firm views on the etiquette of how, where, and with what, to wear the kilt, to those with more relaxed views, who consider that the kilt is an article of clothing and, as with other fashions, can be accessorized as the wearer thinks best.

This article will attempt to detail some of the more common kilt accessories as seen in actual wearing practice. In this sense, it is like a dictionary which catalogues usage, not an etiquette book which declaims on proper style. 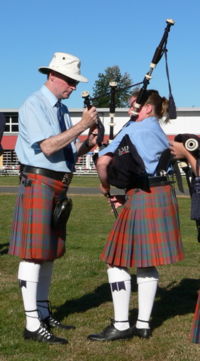 At modern Highland gatherings, participants in Highland attire can be seen wearing a wide variety of headgear, or even going without any headgear at all. But there are two types in particular in widespread usage which are most distinctly Scottish, the Balmoral and the Glengarry.

The Balmoral (named after Balmoral Castle, near Edinburgh, Scotland) is a round, brimless cap, flat on top, with trailing ribbons, and with a ball on top called a toorie. It is often worn with a hackle and a clan crest badge.

The Glengarry is another type of cap, somewhat wedge-shaped, longer than wider, creased lengthwise on the top, and with trailing ribbons. It is named after Glengarry valley in Inverness-shire in Scotland. An example can be seen in the photo gallery below.

Both types come in a variety of colors, but black is most usual. And in both cases, there can be "dicing" around the band of the cap. Both styles will also come with a place on the side of the cap for affixing a clan crest badge.

In the photo at right, Robert MacNeil, former pipe major of the multiple world champion Simon Fraser University Pipe Band is shown wearing his own style of headwear while helping one of the pipers in the lower grades tune her pipes. The photograph of Jack Lee (see photo gallery, below), current pipe major of the SFU Pipe Band, shows the "hatless" style as he warms up in preparation for competition. Of course, during the actual competition performance he and other members of the SFU Pipe Band would be wearing the band's regulation Glengarries.

The question of what sort of jacket (if any) to wear with a kilt is governed by the same considerations which apply with respect to ordinary attire. Essentially, you would wear a jacket or coat for warmth or if it was expected due to the occasion (formal or semi-formal). Where the demands of the weather or occasion do not necessitate an outer upper-body garment (such as at hot summer Highland games gatherings), many kilt wearers wear only a shirt without jacket or coat.

When dressing for warmth, the main consideration is practicality and sweaters are often chosen as well as any coat or jacket which meets the needs of the climate and looks good in terms of color coordination and style.

There are two main types of kilt jacket in common use when dressing for style. The Prince Charlie jacket is used for formal occasions and is similar in this respect to the tuxedo. For less formal situations, or when the kilt wearer simply desires to dress in a slightly more stylish fashion than a casual look, the Argyle jacket is often chosen. It comes in a variety of styles and colors and can be made out of tweed, wool, or other materials.

One style of shirt which is quite common at Highland gatherings is the grandfather shirt, or the Jacobite shirt. These are modern reproductions (or at least reasonably close facsimiles) of the older, pre-Culloden style of shirt. These are full cut shirts with an open, lace-up collar (such as seen in the photo at the top of this page) and come in at least a small variety of colors.

A modern, tailored kilt, with its tapered pleats (tapered from seat to waist) is fastened about the body securely enough with the buckles and straps which are provided for that purpose. The kilt belt worn with such kilts is purely decorative. They are typically fairly wide - between 2 - 1/2 and 3 inches or so - and come in black or brown leather.

Historically, before the advent of the tailored kilt in the late-18th century, some type of belt was necessary in order to secure the kilt about the person and keep it from falling down. It also provided a handy place from which to hang sword, dirk, or pistols. 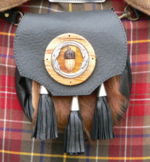 Since the kilt does not have pockets for carrying such things as car keys or wallet, a small bag or pouch, called a sporran and worn in front of the kilt (except that dancers will move it to the side when actually dancing), is almost a necessity. The word sporran is just the Gaelic word for pouch or purse. Sporrans are almost always made from either brown or black leather.

Sporrans come in a very wide range of styles, from simple leather sporrans to those with fur fronts or fur-trimmed and faced with silver or some other metal. Often, the kilt wearer will chose a type of sporran depending on the occasion, with the more elaborate ones being considered suitable for evening wear and the others for casual or all-purpose wear.

The older style bag sporrans (often called "Rob Roy" sporrans) are also frequently seen as they tend to be a bit roomier than some of the more modern varieties.

The sporran is typically suspended from a sporran belt which is a narrow belt (separate from the kilt belt) made of leather or chain. This sporran belt is sometimes run through a pair of small loops provided for that purpose on the back of the kilt. Occasionally the sporran is suspended from special leather belt loops which enable the sporran to be hung directly from the kilt belt. This is often done when a chain is used as the chain might otherwise chafe the kilt.

In historical times, Highlanders would carry a small utility knife called a Sgian Dubh. Nowadays, this item can often be seen tucked into the top of the kilt hose. Again, as with most items of traditional Scottish apparel and accessories, they come in a very wide variety, from fairly plain to quite elaborate silver and gem ornamented designs.

A longer knife, called a dirk is sometimes worn hung from the kilt belt. Historically, this item was a true weapon.

On the front apron of a kilt, near the selvedge and the open, fringed part of the apron, you will often see a kilt pin, often topped with a small decorative clan crest or other similar design. Two styles of kilt pins can be seen in the photo at right. (Note the kilt damage resulting from using the thick-shanked version, however.) This is a decorative item meant to be pinned through the outer apron only. It is not heavy enough to prevent the kilt apron from blowing open in a breeze (the third strap on the kilt is designed to control this). It could be pinned through both aprons, but this would result in distorting the proper hang and action of the kilt. Of course, Highland dancers do not wear the pin through both aprons (when they wear one at all) since the action of the kilt is an essential part of the dance!

Often, a clan crest badge will be pinned to the right side of the Balmoral or Glengarry.

Members of pipe bands wear a type of shoe called a Ghillie brogue, and many other kilt wearers wear the same type of footgear. As always, there is a great variety in style, with many kilt wearers relying on black dress shoes or casual footwear. Highland dancers wear a much lighter type of footgear specially adapted to the active requirements of the dancer and called dancing ghillies (see photo gallery).

With the historical great kilt (or belted plaid), a type of medieval bag shoe was worn. This was a shoe made from a single piece of leather which was cut to a pattern and folded up and around the foot, being secured with a length of leather.

Kilt hose, made of wool or Acrylic or some combination thereof is availabnle in a variety of solid colors so as to match any tartan pattern. They can also be found in diced patterns, or argyle hose. This is common for Highland dancers (see photo is gallery below).

Almost always, a pair of garter flashes will be worn with kilt hose. These consist of colored ribbons attached to elastic bands and are designed to keep the kilt hose from falling down. The ribbons come in an assortment of colors so as to match or complement the tartan colors in the kilt. Some examples of garter flashes can be seen in the accompanying photos. 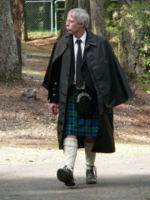 An example of an Inverness rain cape

Although a wide variety of coats, overcoats, and rain gear are worn with the kilt to deal with inclement weather, the Inverness rain cape has come to be almost universally adopted for rainy weather by pipe bands the world over and many other kilt wearers also find it to be the preferable garment for such conditions.

Looking somewhat like the famous cape worn by Sherlock Holmes, the Inverness cape is a water repellant nylon garment. Unlike most rain coats, the Inverness cape has no sleeves. Instead, there is a wide cut in the sides to accommodate the arms. This enables the wearer to access a sporran without unbuttoning and opening up the cape. The opening in the side is covered by a short cape which can be buttoned in the front.

The uniforms worn by members of several military regiments mandate "no underwear" with the kilt except at specified occasions. As a result, to go without underwear is often referred to as "going regimental" or "military practice" and is considered by some to be the traditional practice.

In the Highland dances, the regulations of the Scottish Official Board of Highland Dancing (SOBHD) state regarding underwear: "dark or toning with the kilt should be worn but not white." Highland athletes are also required to wear shorts of some type during the athletic competitions and most opt for either regular shorts or lycra.

With respect to the question of whether or not underwear is worn with the kilt, Matthew Newsome, in his Patented Advice article (op. cit.) states simply: ". . . this decision is ultimately up to you. I'll repeat - unless you are in a military unit, or a pipe band, or some other group that has a uniform requirement - your kilt is not a uniform, but an article of clothing, like your trousers or anything else, that you can wear and accessorize as you see fit."