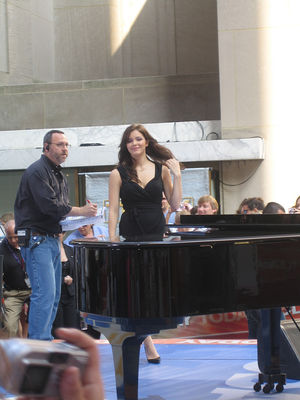 Katharine McPhee (born 25 March 1984 in Los Angeles, California, USA) is an American singer and actress best known for being runner-up to Taylor Hicks in the fifth season of the American television show American Idol. Her debut album was released in 2007.

Katharine Hope McPhee was born 25 March 1984 in Los Angeles, the second daughter of Daniel and Patricia McPhee. Following her graduation from Notre Dame High School in 2002, she enrolled in Boston Conservatory, studying acting and dancing. In 2005, she won lead roles in the stage productions of Annie Get Your Gun and The Ghost and Mrs. Muir, and, the following year, was convinced by friends to try out for the fifth season of American Idol. She won a spot and ended up finishing second in the voting behind Taylor Hicks. This won her a spot on the American Idol Live tour and convinced RCA Records executives to sign her to a recording contract, which ultimately resulted in her debut single, a cover of "Somewhere Over the Rainbow" (which debuted at #2 in the U.S. Top Ten in 2006) and the January 2007 release of her eponymously titled first album.

Miss McPhee has also had numerous acting roles, including a role in the 2006 film Crazy and appearance in the American television series Ugly Betty.