Julian Francis Abele (1881-1950) was one of the first university-trained African-American architects, who designed dozens of important landmarks, such as the Central Library building of the Free Library of Philadelphia. Despite his many significant contributions to the profession, he received little recognition during his lifetime.

Born in Philadelphia on April 30, 1881, was the youngest of eight children born to Charles and Mary Adelaide Jones Abele. Through his mother Adelaide, Julian was a descendant of Reverend Absalom Jones (1746-1818), founder of the Free African Society and of St. Thomas Episcopal Church. Young Abele lived most of his life in the city. As a boy, he attended the Institute for Colored Youth and Brown Preparatory School. As a student in evening classes at the Pennsylvania Museum and School of Industrial Art in 1898, he won the Groff Prize for Architectural Design. That same year, he enrolled in the prestigious architecture program at the University of Pennsylvania, where he won several awards and served as the president of the Architectural Society. Abele achieved all of this while working the entire four years as a designer with the Louis Hickman Architectural Firm, and juggling his job with afternoon and evening classes at the University. In 1902, all of Abele’s efforts came to fruition and he became the first African American graduate of the architecture program at the University of Pennsylvania.

After his graduation from the University of Pennsylvania in 1902 with his degree in architecture, Abele was immediately engaged by established architect Horace Trumbauer, who helped to finance the young architect's three years of study at the famous l’Ecole des Beaux Arts in Paris. When given the opportunity to travel to Paris by Trumbauer in 1903, Abele traveled extensively in Europe absorbing its rich architecture. 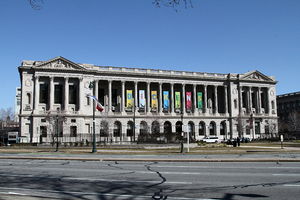 While Abele was in Europe he encountered eighteenth century French architecture, which he favored throughout his career. He particularly preferred the Beaux-Arts style and he took a special interest in studying it in Paris. Abele was noted not only for his adaptation of historical styles to create fine exteriors, but also for his successful rendering of interior space and its decorative details. Julian Abele's artistic versatility is remarkable. Not only was he a master architect, he also worked skillfully with wood, ceramics, iron, copper, brass, precious metals stained glass, and water colors. He made furniture, jewelry, paintings and lithographs as gifts for his friends and associates.

After earning a Diplome d'Architecte in 1905, Abele returned to Philadelphia and the Horace Trumbauer Company. He spent his entire professional life with this nationally known firm, almost all of it as chief designer, taking over the office after Trumbauer's death in 1938. When Trumbauer died Abele continued with the firm and designed dozens of important residential, civic, and commercial landmarks, including the Central Library building of the Free Library of Philadelphia. He has been credited with designing the original campus of Duke University.

Abele, as an African American, lived in the shadows as time and circumstance conspired to conceal his considerable professional talent. Abele lived most of his life in Philadelphia and in 1925 he married his piano teacher Marguerite Bulle; at age 49. He was twenty years older than his Parisian born bride. The couple had three children, but she would leave him and the children to marry another man in 1936. Julian Abele died at home in Philadelphia on April 23, 1950.