John Wood Campbell, Jr., generally known as John W. Campbell, (June 8, 1910, Newark, New Jersey – July 11, 1971, New Jersey) was the influential editor of Astounding Science Fiction from 1937 until his death in 1971. He himself preferred John W. Campbell, Jr., which is how his byline appeared in his magazines and books. After first establishing himself as a well-known science-fiction author, he then devoted himself exclusively to editing. As the editor of the most important magazine in the field, he launched the careers of most of the key figures in what is still generally known as the Golden Age of Science Fiction, including Robert A. Heinlein, Isaac Asimov, Theodore Sturgeon, A. E. van Vogt, and Arthur C. Clarke. Although Campbell had many eccentricities, some of which, such as a belief in psionics, later found their way increasingly into his publications in the 1950s and '60s, he remains, almost without question, the single most important figure in the development of modern science fiction, with the possible exception of his protégé Robert Heinlein. At the time of his sudden and unexpected death after 34 years at the helm of Astounding, however, his quirky personality and occasionally eccentric editorial demands had alienated a number of his most illustrious writers such as Asimov and Heinlein to the point where they no longer submitted work to him.

Campbell was born in Newark, New Jersey in 1910. His father was a cold, impersonal, and unaffectionate electrical engineer. His mother, Dorothy (née Strahern), was warm but changeable of character and had an identical twin who visited them often and who disliked young John. John was unable to tell them apart and was frequently coldly rebuffed by the person he took to be his mother, traumatic experiences that may well have later inspired Who Goes There?, his most famous piece of fiction. Campbell attended the Massachusetts Institute of Technology (MIT), where he befriended Norbert Wiener, one of the godfathers of computers. He began writing science fiction at age 18 and quickly sold his first stories. By the time he was 21 he was a well-known pulp writer of super-science space opera but had been dismissed by MIT: he had failed German. He then spent one year at Duke University, from which he graduated with a Bachelor of Science in physics in 1932. Asimov notes Campbell's presence at Duke and speculates that Duke was "best known in my youth for the work of Joseph B. Rhine on extrasensory perception, and that may have influenced Campbell's later views on the subject." [1] Damon Knight writes that Campbell was a "portly, bristled-haired blond man with a challenging stare" who told him once that "he wasn't sure how much longer he would edit Astounding. He might quit and go into science. 'I'm a nuclear physicist, you know,' he said, looking me right in the eye." [2] He was married to Dona Stewart in 1931, divorced in 1949, then remarried in 1950 to Margaret (Peg) Winter. He spent most of his life in New Jersey and died at home, "quietly, quickly, painlessly, as he sat before his television.""[3]

Written when he was still only 28, a novella called Who Goes There? was Campbell's last significant piece of fiction. Appearing in the August, 1938 Astounding it begins with the memorable line, "The place stank." and is about a isolated group of Antarctic researchers who discover a crashed alien vessel whose single occupant is a malevolent shape-changer. Before the horrific story ends, 15 of the 37 members of the expedition have been replaced by alien impostors. It was twice adapted as a film, the first time rather loosely as The Thing from Another World in 1951 and then far more faithfully as The Thing in 1982. Referring to Campbell's youthful encounters with the unfriendly woman who was the identical twin to his beloved mother, Sam Moskowitz has written in his seminal critical study of science-fiction writers, "From the memories of his childhood he drew the most fearsome agony of the past: the doubts, the fears, the shock, and the frustration of repeatedly discovering that the woman who looked so much like his mother was not who she seemed. Who goes there? Friend or foe?" [4]

"The Father of Science Fiction"

Campbell was regarded by most of the Astounding stable of writers as an important and encouraging influence on their work, and there are many accounts by writers such as Isaac Asimov and Lester del Rey of how he helped shape their careers. Asimov called him outright "the father of science fiction,"[5] and although the somewhat earlier H. G. Wells and Hugo Gernsback are still remembered as being influential pioneers, as Asimov says, they "only laid the foundation."[6] As the Science Fiction Encyclopedia, edited by Peter Nicholls, wrote about Campbell: "More than any other individual, he helped to shape modern sf." His influence reached its height during the period between 1938 and the early 1950s. After that, new magazines such as Galaxy and the Magazine of Fantasy and Science Fiction, which built upon the foundation Astounding had laid during its Golden Age, moved in somewhat different directions and developed talented new writers such as Jack Vance and Philip José Farmer who were not directly influenced by Campbell.

Asimov says of his unmatched influence on the field: "By his own example and by his instruction and by his undeviating and persisting insistence, he forced first Astounding and then all science fiction into his mold. He abandoned the earlier orientation of the field. He demolished the stock characters who had filled it; eradicated the penny-dreadful plots; extirpated the Sunday-supplement science. In a phrase, he blotted out the purple of pulp. Instead, he demanded that science-fiction writers understand science and understand people, a hard requirement that many of the established writers of the 1930s could not meet. Campbell did not compromise because of that: those who could not meet his requirements could not sell to him, and the carnage was as great as it had been in Hollywood a decade before, when silent movies had given way to the talkies."[7]

Deadfall and the atomic bomb

The most famous example of the type of speculative but plausible science fiction that Campbell demanded from his writers is Deadfall, a short story by Cleve Cartmill that appeared during the wartime year of 1944, a year before the detonation of the first atomic bomb. As Ben Bova, Campbell's successor as editor at Analog, writes, it "described the basic facts of how to build an atomic bomb. Cartmill and... Campbell worked together on the story, drawing their scientific information from papers published in the technical journals before the war. To them, the mechanics of constructing a uranium-fission bomb seemed perfectly obvious." The FBI, however, descended on Campbell's office after the story appeared in print and demanded that the issue be removed from the newsstands. Campbell convinced them that by removing the magazine "the FBI would be advertising to everyone that such a project existed and was aimed at developing nuclear weapons" and the demand was dropped. [8]

Editorship of Astounding and Unknown; the Golden Age

Campbell was well known for the opinionated editorials in each issue of the magazine, wherein he would sometimes put forth quite preposterous hypotheses, perhaps intended to generate story ideas. An anthology of these editorials was published in 1966. He also suggested story ideas to writers (including, famously, "Write me a creature that thinks as well as a man, or better than a man, but not like a man"), and sometimes asked for stories to match cover paintings he had already bought.

Asimov once asked Campbell why he had stopped writing fiction after becoming the editor of Astounding. Campbell replied, "Isaac, when I write, I write only my own stories. As editor, I write the stories that a hundred people write."[9] 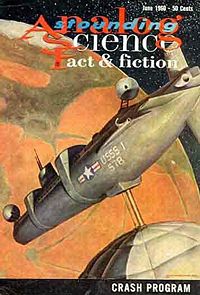 A United States submarine in Martian orbit, propelled there by a Dean drive, on an Astounding cover. 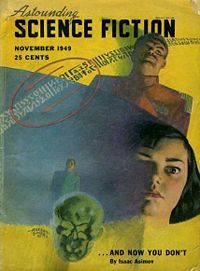 The famous November 1949 "future" issue, in which all the stories had previously been "reviewed" in November of 1948

Campbell revealed a sly sense of humor in the November, 1949 issue. He had always encouraged literary criticism by Astounding's readership, and in the November, 1948 issue he published a letter to the editor by a reader named Richard A. Hoen that contained a detailed ranking of the contents of an issue one year in the future. Campbell went along with the joke and contracted stories from most of the authors mentioned in the letter that would follow the fan's imaginary story titles. Ironically, when the issue actually appeared, Hoen had forgotten his original letter, and was supposedly "amazed at how many of my favorite authors appeared in one issue". Probably the best-known story from that issue is "Gulf", by Robert A. Heinlein; other stories and articles were written by a number of the most famous authors of the time: Asimov, Theodore Sturgeon, Lester del Rey, A. E. van Vogt, L. Sprague de Camp, and the astronomer R. S. Richardson.[19]

In the eyes of others

Asimov says in his autobiography that Campbell was "talkative, opinionated, quicksilver-minded, overbearing. Talking to him meant listening to a monologue.... He was a tall, large man with light hair, a beaky nose, a wide face with thin lips, and with a cigarette in a holder forever clamped between his teeth."[20] "Six-foot-one, with hawklike features, he presented a formidable appearance," says Sam Moskowitz, a well-known fan and historian of the field.[21] Damon Knight's opinion of Campbell was similar to Asimov's: "No doubt I could have got myself invited to lunch long before, but Campbell's lecture-room manner was so unpleasant to me that I was unwilling to face it. Campbell talked a good deal more than he listened, and he liked to say outrageous things."[22] The notable British novelist and critic Kingsley Amis, in his seminal 1960 book about science fiction, New Maps of Hell, dismisses Campbell brusquely: "I might just add as a sociological note that the editor of Astounding, himself a deviant figure of marked ferocity, seems to think he has invented a psi machine." [23]

The noted science-fiction writer Alfred Bester, an editor of Holiday Magazine and a sophisticated Manhattanite, recounts at some length his "one demented meeting" with Campbell, a man he imagined from afar to be "a combination of Bertrand Russell and Ernest Rutherford," across the river in Newark.[24] The first thing Campbell said to him was that Freud was dead, destroyed by the new discovery of Dianetics, which, he predicted, would win L. Ron Hubbard the Nobel Peace Prize. Over a sandwich in a dingy New Jersey lunchroom Campbell ordered the bemused Bester to "think back. Clear yourself. Remember! You can remember when your mother tried to abort you with a button hook. You've never stopped hating her for it." Shaking, Bester eventually made his escape and, he says, "returned to civilization where I had three double gibsons." He adds: "It reinforced my private opinion that a majority of the science-fiction crowd, despite their brilliance, were missing their marbles."

Asimov's final word on Campbell was that "in the last twenty years of his life, he was only a diminishing shadow of what he had once been."[25] Even Robert A. Heinlein, perhaps Campbell's most important discovery and, Virginia Heinlein tells us, by 1940 a "fast friend", [26] eventually tired of Campbell. "When Podkayne [Podkayne of Mars] was offered to him, he wrote Robert, asking what he knew about raising young girls in a few thousand carefully chosen words. The friendship dwindled, and was eventually completely gone." [27] In 1963 Heinlein wrote his agent to say that a rejection from another magazine was "pleasanter than offering copy to John Campbell, having it bounced (he bounced both of my last two Hugo Award winners) — and then have to wade through ten pages of his arrogant insults, explaining to me why my story is no good." [28]