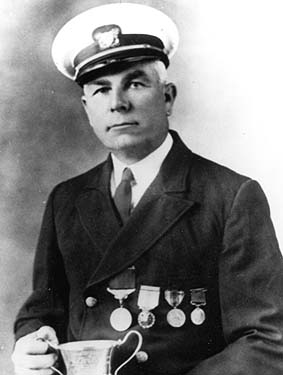 John Allen Midgett was recognized by the UK government for saving UK seamen in 1918.

On August 16, 1918, Midgett was the Keeper of the Chicamacomico Lifeboat Station when he lead his power surfboat crew on the celebrated rescue of the 42 crew members of the British tanker Mirlo.[3][1][5][6][7] The UK Board of Trade awarded Midgett a silver cup in 1918, and he was awarded a Gold Lifesaving Medal twelve years later.

In 1972 the Coast Guard named the USCGC Midgett after him.[3]

Midgett was mortally wounded in an automobile accident in late 1937 and died early in 1938.[2] According to the Dictionary of North Carolina Biography Midgett was friends with Franklin Delano Roosevelt, and his funeral was attended by a number of Congressmen.