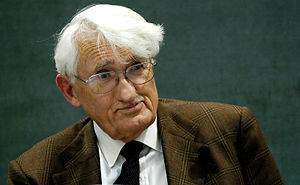 Democracy theorists such as philosopher and sociologist Jürgen Habermas have studied how the space for citizenship called the public sphere has been shrinking.

Jürgen Habermas is a philosopher and sociologist specializing in social capital and the public sphere. The Stanford Encyclopedia of Philosophy comments that he bridges "continental and Anglo-American traditions of thought".[1] He still actively writes and lectures, but has retired from the directorship of the Institute for Social Research at the Johann Wolfgang Goethe University Frankfurt am Main.

In his book The Structural Transformation of the Public Sphere are confirmed by events in the media. Today, in contrast to colonial times, there is scant public debate, few public forums, and political discussion has degenerated from a fact-based rational-critical examination of public matters into a consumer commodity. There is the illusion of a public sphere, according to Habermas, who argues that citizens have become consumers, investors, and workers. Real news (information which helps free people stay free) is being elbowed out by advice, soft-porn, catchy garbage, celebrity antics, and has become infotainment, that is, a commodity competing in a mass entertainment market. It matters less whether news is right or wrong, and matters more whether it's gripping. Habermas' sociological and philosophical work tries to explain how this transformation happened by examining a wide range of disciplines, including political theory, cultural criticism, ethics, gender studies, philosophy, sociology,[2] history, and media studies.[3] According to Habermas, a variety of factors resulted in the eventual decay of the public sphere, including the growth of a commercial mass media, which turned the critical public into a passive consumer public; and the welfare state, which merged the state with society so thoroughly that the public sphere was squeezed out. It also turned the "public sphere" into a site of self-interested political brawl for state resources rather than a space for a public-minded rational consensus. And it turned real citizens into consumers.