Influenza, commonly called “the ‘Flu”, is described as "an acute viral infection in humans involving the respiratory tract. It is marked by inflammation of the nasal mucosa; the pharynx; and conjunctiva, and by headache and severe, often generalized, myalgia".[1] It is contagious (easily passed from one person to another) and is caused by viruses of the Orthomyxoviridae family.

There are three types of influenza viruses:[2]

This is a species-specific strain that infects horses, ponies, donkeys and mules. Humans do not catch this disease but are carriers of it. It is airborne and highly contagious. Equine influenza generally does not kill its victims, and affected horses display similar symptoms to those of humans.

In 2007, a horse flu epidemic began in New South Wales, Australia. The outbreak is believed to have begun as a result of infractions of proper quarantine procedure and is expected to cost millions of dollars in lost revenue. As of September, 2007, it had spread to the Victorian border, causing the cancellation of events at the Melbourne Show, and the possibility that the Spring Carnival, including the running of the Melbourne Cup horse race, would be canceled.

The prevalence of influenza among people who have an "influenza-like illness" varies strongly with the seasons of the year. In the United States, the Centers for Disease Control and Prevention (CDC) maintains public statistics at http://www.cdc.gov/flu/weekly/fluactivity.htm.

In addition to seasonal variations, there have been several worldwide influenza epidemics, resulting in millions of deaths.

Since anti-viral drugs are effective in treating influenza if given early (see treatment section, below), it can be important to identify cases early. A systematic review by the Rational Clinical Examination concluded that the best findings for excluding the diagnosis of influenza are:[13]

Using the symptoms listed above, the combinations of findings below can improve diagnostic accuracy.[16] Unfortunately, even combinations of findings are imperfect. Studies of combining symptoms have included use of recursive partitioning; however, this study combined two cohorts with different prevalences of influenza.[17] However, Bayes Theorem can combine pretest probability with clinical findings to adequately diagnose or exclude influenza in some patients. The pretest probability has a strong seasonal variation; the current prevalence of influenza among patients in the United States receiving sentinel testing is available at the CDC.[18] Using the CDC data, the following table shows how the likelihood of influenza varies with prevalence: 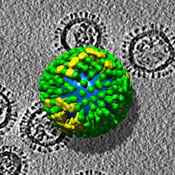 An electron tomography of the influenza virus.

Rapid tests using for influenza antigens include immunofluorescence assays, immunoenzyme technique, and polymerase chain reaction testing. The sensitivity of these tests range from 63% to 95%.[22][23]

The polymerase chain reaction is the most sensitive test and is as sensitive as viral culture.[21]

Influenza-like illness is defined as "fever (temperature of 100°F [37.8°C] or greater) and cough and/or sore throat"[25] A study from Australia found that possible causes for influenza-like illness include respiratory syncytial virus, rhinovirus, adenovirus, parainfluenza viruses, coronaviruses, and metapneumovirus.[26]

Other diagnoses to consider are:

Different strains of influenza virus have differing degrees of resistance against these antivirals and it is impossible to predict what degree of resistance a future pandemic strain might have.[27]

In the United States, the Centers for Disease Control and Prevention have issued recommendations for the use of antiviral agents.[28] The CDC recommends oseltamivir or zanamivir.

According to two decision analysis studies of adults, treatment may be justified in the following settings:

During local outbreaks of influenza, the prevalence will be over 50-80%[20][12] and thus patients with any of the above combinations of symptoms may be treated with neuramidase inhibitors without testing. In the absence of a local outbreak, treatment may be justified in the elderly during the influenza season as long as the prevalence is over 15%.[12]

These drugs are effective, but modestly so, against both influenza A and B.[29][30] Examples are oseltamivir (trade name Tamiflu) and zanamivir (trade name Relenza) are neuraminidase inhibitors.[31] The Cochrane Collaboration concluded that these drugs reduce symptoms and complications.[32] Zanamivir, which must be delivered by inhalation, may cause bronchospasm in patients with asthma.

Oseltamivir may[33] or may not[29] reduce the incidence of respiratory complications on one of 13 patients who take it (number needed to treat = 13). This trial only included patients up to 65 years old.

Neither of these drugs can be administered by injection. For the 2009 pandemic, the U.S. Food and Drug Administration issued an emergency authorization for the use of intravenous peramavir, which had been in Phase III clinical trials. [34] 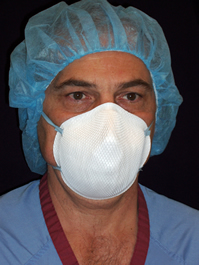 N95 mask. This mask is NOT better than a regular surgical mask.

A regular surgical mask is adequate.[36]

In the United States, the Centers for Disease Control and Prevention has maintains recommendations on who should get the influenza vaccination.[37] Protection from infection occurs by two weeks after vaccination and lasts one year.[37]

The quality of the research on vaccination my be reduced by conflict of interest according to the Cochrane Collaboration.[38]

Several randomized placebo-controlled trials assess adverse effects[39] [40], including patients who have lung disease[41] or are elderly[42] [43].

Among health adults, vaccination may be associated with arm pain[39] and "runny nose or sore throat during the first 7 days after vaccination"[40].

Among patients with asthma, vaccination was associated with body aches.[41]

Among elderly patients, the influenza vaccine may increase arm pain.[42] [43]

Chemoprevention (chemoprophylaxis) with neuraminidase inhibitors can prevent symptomatic influenza according to a meta-analysis by the Cochrane Collaboration.[32]Zanamivir may cause bronchospasm in patients with asthma. Extended-duration (>4 weeks) chemoprevention may be effective as well.[44]

A pandemic of Spanish Influenza, involving a highly pathogenic mutation of serotype H1N1, swept across the world in the wake of the Great War (1918-20). More people are believed to have died of the flu in the year after the war then in the Great War itself. Estimates vary but it is estimated that one third of the world's population were infected and up to 50 million people perished in this pandemic (it is possibly that fatalities world wide were as high as 100 million).[45] Some comparisons are drawn between Spanish Flu and the Black Death (Bubonic Plague) of 1347 to 1351. Estimates are that the flu killed more people in one year than plague did in four.

In the United States, the epidemic led to closing of schools and banning of public meetings in order to successfully reduce mortality.[46]

A/H2N2 virus was responsible for this outbreak

This was caused by serotype A/H3N2.