The Hudson River is a river in the United States of America. It is the most important river in New York State.

The Hudson is 507 km. long. It starts in the Adirondack Mountains, and ends in Long Island Sound between Jersey City and New York City.

Its largest tributary is the Mohawk River. The Mohawk joins the Hudson at Troy.

The Hudson is named after the Englishman Henry Hudson, who explored it in 1609 in the service of the Dutch VOC (East India Company) while trying to find a Northwest passage. 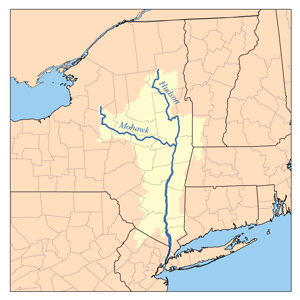