This article is about the meaning of the word "guilt" under the laws of the United States of America. For a discussion of the decisional law on this subject, see Schlup-House doctrine.

In ordinary English usage, the opposite of "guilt" is "innocence," and either word usually carries a connotation of moral evaluation. In the field of law, however, that concept of "guilt" is of negligible importance because "guilt" or "innocence" is a question of fact whose truth it is often impossible to discover, much less to prove to a legal standard, which is why the system concerns itself with "justice" instead of "truth." (In the same way that engineering may be viewed as the practical application of "pure" science to the real world, law may be viewed as the application of moral precepts.) Paradoxically perhaps, the entire field of criminal law revolves around the idea of "guilty," whose opposite is "not guilty." In the language of statistics, the "null hypothesis" in a criminal case is always "The defendant is not guilty," never "The defendant is innocent" or "The defendant is guilty," so if the prosecution disproves the null hypothesis with evidence at or above the applicable "confidence level" (called in law the "standard of proof"), the conclusion (called in law the "verdict") is "The defendant is guilty." In this essay, the factual matter will be referred to as "actual guilt" or "actual innocence," and the legal matter as "legally guilty" or "legally not guilty," and if the modifier "legal(ly)" is not specified, it is to be understood. Thus, the possible verdicts of "guilty" and "not guilty" are to be read as meaning "legally guilty" and "not (legally) proved guilty," respectively.

There are two inseparable aspects of the criminal law that affect legal guilt: "Substantive law" is the codified legislative enactments that define the "elements" of each crime -- that is, the specific acts and/or circumstances that constitute that criminal offense -- as well as the penalties for committing it. "Procedural law" is the body of rules that govern the process by which the substantive criminal laws are enforced, from the investigation and accusation by employees of the executive branch of government, through the determination of legal guilt by employees of the judicial branch, and if the accused is found legally guilty, through the infliction of punishment by employees of the executive branch. (Both the legislature and the judiciary have authority to shape the procedural law, but only the legislature can make substantive law, and the judiciary is supposed to enforce the written laws as the legislature intended.)

Part of the difference between actual guilt and legal guilt arises from the way the substantive law defines crimes: How, for example, can anyone know for certain what was in someone else's mind at the moment he performed a physical act that may or may not have been a crime depending on his thoughts at that split second? So the procedural law provides algorithms for determining legal guilt, such as requiring every element of the crime to be proved "beyond a reasonable doubt" to rebut the default presumption that the accused is not legally guilty. (Despite the saying "Innocent until proven guilty," there never has been a presumption of actual innocence, merely a figurative thumb on the "not guilty" side of the scales of justice.)

A fundamental principle the criminal law shares with the civil law is that of finality of a court's formal order deciding a case: Society needs closure for disputes. It is sometimes said, and not always facetiously, that justice is a consumer product, and the public's satisfaction with the quality of that commodity is demonstrated whenever the loser in a civil lawsuit pays the judgment and moves on without taking any unlawful revenge on the winner. So, too, in the criminal law, most people recognize that the system is fallible, so its procedures include mechanisms for correcting its own mistakes, and when it is seen to be making a lot of mistakes of the same kind, the procedural laws are changed to avoid that kind of mistake more often, and that is a major way both the substantive and the procedural law evolve.

Procedural law balances the possibility of human error and the need for finality by providing for both kinds of mistakes, what statisticians call "Type I" and "Type II" errors: If a criminal trial later turns out to have ended in a Type II error -- which is when the null hypothesis is false but is concluded to be true, meaning the defendant is actually guilty but the verdict is "not guilty" -- the procedural rule against "double jeopardy" keeps everyone from disturbing the finality of that erroneous verdict. If the trial later turns out to have ended in a Type I error -- with the null hypothesis being true (not guilty) but the verdict concluding it is false ("guilty") -- there are very limited ways of correcting that "miscarriage of justice,"

One big difference between criminal trials and post-conviction proceedings is that right up to the time the verdict comes in "guilty," the defendant is presumed to be not guilty (and the prosecution has to rebut that presumption by weighty evidence), but once the trial is over, the convict is presumed to be guilty (and if the defense had weighty enough evidence to rebut that presumption, that evidence should have been presented at the trial). So to further the public policy in favor of the finality of judgments, the only grounds for overturning a conviction are that there was some serious procedural problem with the trial process that could not be addressed (and corrected) in that process and that caused the "guilty" verdict. In appeals (filed a short time after sentencing, before the conviction becomes judicially "final"), the defense usually argues that the judge erred in allowing or not allowing certain evidence to be presented to the jury at trial, and if the judge had ruled the other way, the jury would have acquitted the defendant instead of convicting; if the appellate court agrees, it reverses the conviction and remands the case to the trial court for a do-over. In post-conviction proceedings (filed after the conviction becomes "final" and so cannot be reconsidered by the same or any higher court), the defense usually asserts that certain evidence is available now that was not available to the defense before the end of the trial and that would have caused the jury to acquit the defendant if it had been presented at trial. (Note that the "new" evidence does NOT have to prove the convict was factually innocent -- if the evidence had raised a "reasonable doubt" of his legal guilt, the jury should have found him "not guilty.")

Just as in baseball "A tie goes to the runner," in law a tie goes to the party with a presumption in its favor. So at the trial, if the evidence for and against the defendant is at the same level, the jury must acquit, but in proceedings challenging a final judgment, if the total of the new evidence and the favorable (to the defendant) evidence actually presented to the jury at trial does not outweigh the evidence against the defendant at trial, the defendant does NOT get a new trial. In real life, that is the usual outcome, and it should be, because it means trials are generally conducted according to the procedural law. In a minority of cases, however, the conviction is overturned, and in a minority of those cases, the defendant is "cleared" (or "exonerated") of the charges, instead of getting a new trial, because the new evidence proves the defendant was actually innocent. (While these are a relatively small percentage of real cases, they are a mainstay of fictional works, and the rare real-life instances often receive inordinate amounts of publicity.)

Since it is seldom possible to prove a negative proposition directly, there are generally two ways to prove a given defendant is actually innocent of a specified crime that only one person committed: One is to prove it was impossible for that defendant to commit that crime, and the other is to prove some other specific person did commit it -- either way, the proof must be "conclusive" (or what lawyers often call "dispositive"), meaning a rational mind would accept the logical conclusion it leads to as fact. For example, common "impossibility" defenses are that the defendant was physically unable to perform the criminal act, but the most frequent is an "alibi" defense that the defendant was somewhere else at the time. Proof that someone else actually committed the crime may include a confession by the actual perpetrator, and that is the type of case that is as likely to be reopened by the prosecution as by the defense.

The logical situations are diagramed in the flow charts "Before Trial" and "After Trial," and the key to the meanings of the symbols in those diagrams is in the figure below. The usual trial situation is shown in the top half of "Before Trial"; the bottom half represents the situation where there are two suspects in a crime only one person committed. The usual "Type I" error situation, which is the assertion supporting the procedure diagramed in "After Trial," is that the jury made a mistake at the top right corner of "Before Trial" by concluding that the evidence against the defendant was proof "beyond a reasonable doubt"; if the proof that someone else is actually guilty of the crime is not discovered until long after the defendant was convicted, a prosecutor cannot convict the person who is actually guilty until the convicted person is exonerated. 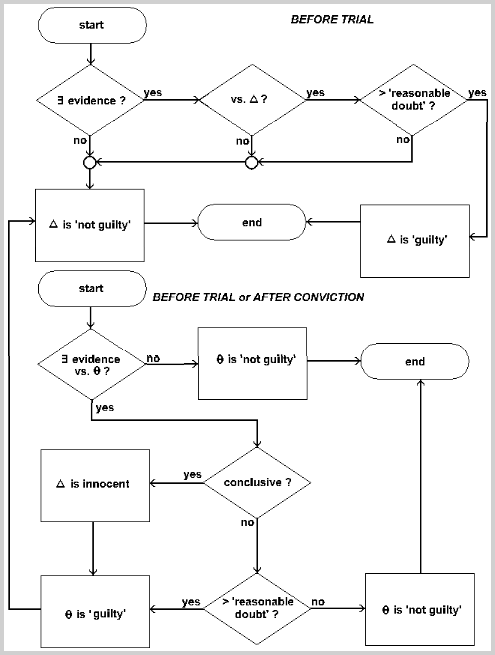 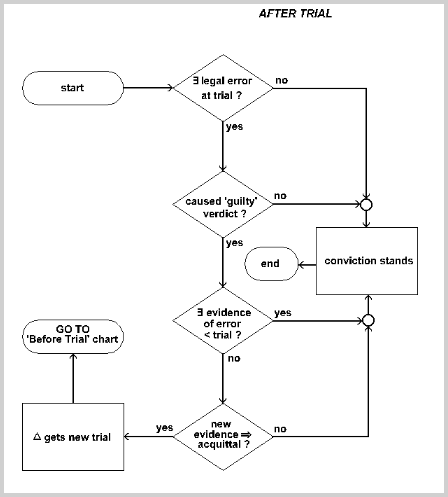