Dropped from aircraft and unmanned aerial vehicles, a glide bomb has wings or other aerodynamic surfaces that provide lift, so that its range is extended and its trajectory is not affected only by gravity, wind, and air resistance. Practical variants are electronically guided and may be precision-guided munitions. 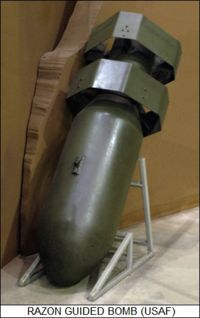 There were several attempts, of varying success, to use gliding bombs late in the Second World War, but the available sensing and guidance technology were inadequate for effective use. Even television cameras, a reliable commodity today, could only transmit a crude picture from the nose of a bomb.

One of the problems of the AZON and related weapons is that to be guided, they could not roll, as did conventional bombs. Rolling, however, stabilized the flight path, so the weapons operator both had to correct drift and aim at the target.

While the German Fritz-X is often called a guided bomb, most versions seem to have been rocket-assisted and really an air-to-surface missile. It had dramatic results, sinking the Italian battleship Roma after Italy surrendered and Germany kept fighting.

Modern glide bombs vary with the need for precision delivery, and the type of payload they carry. 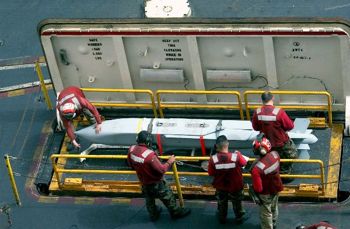 Such weapons are simpler than powered air-to-surface missiles, although powered derivatives of some glide bombs have been developed, such as the AGM-154 Joint Standoff Weapon.

The current GBU-39 Small Diameter Bomb and the GBU-53 Small Diameter Bomb in development are glide bombs, In foreign military sales, their lower weight also provides greater range for the same number of bombs, considered especially important by the Israelis. [2]

Weapons carrying cluster munitions are area-effect and do not need extreme precision, but they need guidance when attacking targets at long range. The Wind Corrected Munitions Dispenser is one such device.

Glide bombs have usually not been as precise as missiles or gravity bombs, but this is changing with the GBU-53. Another aspect of both Small Diameter Bombs is that they are small, such that many can be released at once from an aircraft at high altitude.