The U.S. military definition of geospatial information is the

"Information that identifies the geographic location and characteristics

of natural or constructed features and boundaries on the Earth, including: statistical data and information derived from, among other things, remote sensing, mapping, and surveying 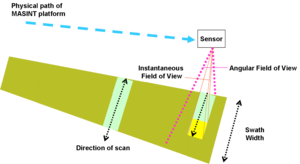 At the start of the geospatial analysis process, one needs to consider what is covered by the image. Some of the basic characteristics of a field of view, shown in the digure of scanning sensors, are discussed under the intelligence use of passive sensors

Imagery intelligence will produce large numbers of individual photographs, which, when correlated with geospatial information, forms a mosaic. Choosing the sources of information to combine, however, while understanding their inherent biases, can take a great deal of thought. Disastrous interpretations have come from making assumptions that seem reasonable on a map, but either lack key data or combine types of information that cannot be directly combined without additional processing. Each contributing source needs to be evaluated to understand its quality and inherent errors.

For example, the Battle of Tarawa in the Second World War produced disastrous casualties for the invading United States Marine Corps, because the maps and individual photographs were not compared over time. The waters surrounding Betio, the specific island in the Tarawa Atoll, on which the amphibious landing was being made, have some unusual tidal characteristics, called neap tides. If a series of photographs, over a long period of time, had been available, the tidal patterns might have become obvious, but this was not available. As a result, the landing craft hit bottom a mile or more from what appeared to be the beach, and the Marines had to wade in, under intense fire. They could not carry heavy equipment that the landing craft would have brought to the shore.

Planning a vacation based on a photogaph — which, contrary to the brand name, is what a Google Maps or other commercial service provides — can lead to unpleasant surprises. What may have seemed a lovely beach, from a photograph taken in summer, may be submerged at high tide, or snow-covered in winter.

So, temporal information is among the most basic considerations in examining terrain photographs, which, contrary to the terminology of Google Maps, do not equate to maps. Maps may have started with photographs, but photographs that are examined, geographically correlated, and combined in a meaningful way. For example, political or legal boundaries cannot show on photographs. When boundaries are disputed, people following "the map" may cross into dangerous areas.

Again, a military definition of the geospatial intelligence process speaks of

"The exploitation and analysis of imagery and geospatial information

Pay particular attention to the word "imagery", derived from "image". An image is something presented under certain conditions. Many sensational "tabloid" pictures show a remarkable difference between a studio photograph with careful makeup, lighting, hairstyling, etc., versus a police mugshot of the same individual arrested after a hard night of drinking.

Time, date, and human-defined boundaries such as legal and political boundaries are examples of things not visible from a single photograph.

Another basic considerations, which comes before combining information, should be remembered from basic lessons in world geography. The most common "flat map" Mercator projection of the earth exaggerates the proportions of polar areas, in comparison with the information coming from a globe, a conformal-conic projection, or a polar projection.

Many other details come from alternative ways of taking visible light photographs, and especially images from sensors operating outside the visual photographic region. An early but classic application was using "false-color" photographic film with sensitivity in the near infrared spectrum. While a reconnaissance photography might show what apparently was foliage, examining the infrared spectra distinguished between chlorophyll of real plants and the green of camouflage paint. See spectroscopic MASINT for some of the techniques used to examine the multispectral wavelengths in the pixels of visible-light photographs.

There are a number of techniques in which imaging radar can be used to form images, usually not as sharp as those made by visible light, but providing the ability to see through night or weather, and, in some cases, through walls and other obstacles to vision. Moving target indicator radar can examine images and highlight only those features that are moving; MTI can be backtracked to add patterns of movement over time to an image; in the geospatial context, MTI can add the time dimension to the geographic.