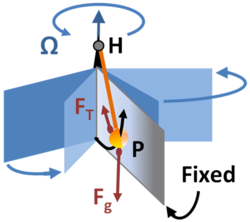 (PD) Image: John R. Brews
While the pendulum P swings in a fixed plane about its hanger at H, the planes of the Earth observer rotate. In an inertial frame the bob is subject to two forces: the tension in the wire FT and the force of gravity Fg.

The Foucault pendulum, or Foucault's pendulum, demonstrated in Paris in 1851, is named after the French physicist Léon Foucault. It is a device that demonstrates the rotation of the Earth. According to an inertial observer, the pendulum swings in a plane fixed relative to the "fixed stars", while as observed on Earth this plane appears to rotate. For most pendulums, the effect is masked by other complications, so some care must be taken in constructing a successful pendulum, particularly to insure the hanger exerts no torque upon the pendulum and is immune to wear.[1]

The easiest way to understand the operation is to imagine the pendulum at the North pole, shown in the figure. As the pendulum swings, the Earth rotates and it appears to the Earth-bound observer that every 24 hours the pendulum returns to its initial plane of oscillation.

In the inertial frame of reference, the pendulum swings back in forth in a plane. However, at the top of its swing it has zero velocity and the bob is subject to no centrifugal force, while at the bottom of its swing it moves rapidly, and is subject to considerable centrifugal force. Consequently, the tension in the wire varies appreciably if the swing has large amplitude, and the wire will stretch as the bob descends, meaning the orbit is not a circle. That complicates the analysis without adding to any insight into the experiment.

To simplify the analysis and make clear what the experiment is about, the pendulum is idealized as executing very small amplitude swings, such that the bob's change in elevation is negligible, the bob's velocity is low enough that centrifugal force has negligible effect, and the tension in the wire FT has always a magnitude the same as the magnitude of the force of gravity, |Fg|.

Under these circumstances, if we introduce coordinate axes with z the vertical coordinate and x and y coordinates in the horizontal plane, the movement of the pendulum is analyzed entirely in the xy-plane. The problem in the inertial frame becomes one of watching the bob travel back and forth along the same direction parallel to the ground at the North pole, while from the Earth frame, one watches the same thing from a rotating carousel.

In the inertial frame the path of the bob is a straight line in the xy-plane. If the origin is taken at the center of the swing, the path is described as:

where ur is a unit magnitude vector pointing along the path of the bob, and r is the radius vector from the origin to the bob. The frequency ω is related to the period T of the swing as:

and one swing occurs as the time ranges between −T/2 and T/2.

The velocity of the bob is then (using a dot notation for time derivatives in the inertial frame):

The net force on the bob is therefore:

At time t =T/2, the radial coordinate is r = Aur and the bob is at its furthest extreme. The tension in the string and gravity combine in a radially inward component, accelerating the bob toward the origin with acceleration A ω2. At time t=0, there is zero net force on the bob, and it travels at maximum speed through the origin.

This net force upon the bob (within the idealizations outlined above) is the resultant of the tension in the wire and the force due to gravity, which both the Earth observer and the inertial observer see as forces acting upon the bob, and both agree upon their measure. However, the Earth observer measures other forces at work as well, as discussed next.

(PD) Image: John R. Brews
As time progresses and the unit vectors rotate maintaining unit size, each unit vector's change is orthogonal to it, and therefore parallel to its orthogonal partner.

The Earth coordinate axes rotate with the angular rate Ω of the Earth about the pole. Thus, the unit vector ur is described from Earth at any given time t as:

with i, j unit vectors in the x- and y-directions. In the Earth frame, i and j are time-independent unit vectors, while in the inertial frame it is ur and ut (the unit vector perpendicular to ur introduced below) that are time independent. The time derivative of the unit vector ur is:

where ut is a unit magnitude vector orthogonal to the radial vector ur in the xy-plane. Likewise:

At t=0 the plane of the pendulum is along the x-axis, and at t =T/2 the Earth has rotated counterclockwise by 90°, placing the pendulum along the negative y-direction. Consequently, the path of the bob in the Earth frame is:

The velocity of the bob is:

The acceleration of the bob is:

Unlike the inertial frame acceleration, which always is in the radial direction, the Earth observer sees a perpendicular component that causes the plane of the pendulum to rotate clockwise (opposite to the Earth's rotation).

This result can be compared with the inertial frame acceleration:

Using the right-hand rule to introduce the vector representing the rotation of the Earth along the z-axis as:

the cross product of the apparent velocity of the bob and the rotation vector is:

and the observed Coriolis force:

where vEarth is the velocity of the bob as seen by the Earth observer. The Coriolis force accounts for the Earth observation of a daily precession of the pendulum's orbit. 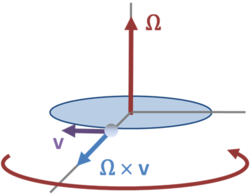 (PD) Image: John R. Brews
Vector cross product used to determine the Coriolis force when the bob is "frozen" at a fixed location in the inertial frame.

If the pendulum is "frozen" at some position r, so the bob does not swing and simply is stationary in the inertial frame, the Earth observer sees the bob execute a circular orbit of radius r, as shown in the figure. The vector Ω×vEarth points outward, and the Coriolis acceleration has twice this value and points inward. The Earth observer sees a net force on the bob of:

If the pendulum is not at the North pole, but at a latitude making angle φ with the horizontal, the axis of rotation is inclined and the rate of rotation of the plane of the pendulum becomes Ω sinφ. Thus, at the equator φ=0 and there is no rotation.[2]