In the religio Romana the flamen Divi Iulii was the priest of Divus Iulius.[1] He was the fourth and most influential of the so-called flamines maiores, the archpriests of the Roman flaminates. After two years of unofficial worship of the divinized Julius Caesar, the new priestly office was introduced following the senatorial consecration (consecratio) of Divus Iulius in 42 BC, but remained unoccupied until 40 BC.

Origin and attributes of the office

In early 44 BC the Senate had decided that Caesar would receive an official apotheosis to state god and be given the god name Divus Iulius. During the same session the inauguration of the respective priestly office was also decreed and Mark Antony designated as the first flamen Divi Iulii.[2] The original rationale for the creation of a new flamen maior can be found in early Roman history, when legendary king Numa fathered the third great flamen, the flamen Quirinalis, archpriest of the god Quirinus, who was later identified as the ascended Romulus, once the latter's brutal slaying by the senators had been virtually forgotten. Since Julius Caesar, the founder of the new Rome, had often been identified with the original founder Romulus, he regarded Numa's theopolitics as a precedent for introducing his own flamen maior for the time following his planned apotheosis.[3]

more to be added later

Office holders in the city of Rome

In his function as pontifex maximus Julius Caesar himself chose Mark Antony for the office using the ritual of captio. He couldn't designate his nephew Gaius Octavius, because he had already planned for him to become his political heir. But Mark Antony was equally suited for the office, because he was a close confidant of Caesar and a near relative through his mother Iulia. In addition he had been augur since 50 BC and later magister of the newly established luperci Iulii. He hadn't exercised a political office since 47 BC, when he assumed consulship in 44 BC together with the dictator perpetuo. Following Caesar's captio Mark Antony was at first unable to inaugurate, because he was a plebeian. On the basis of the lex Cassia of 45 BC Caesar however had the right to elevate him (and Gaius Octavius) to patrician status. 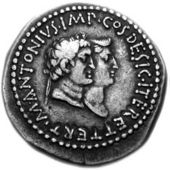 The fact that Marc Antony's parents hadn't been wedded with the ancient ritual of the confarreatio was obviously ignored in this case. Furthermore, a destinatus for the office of a flamen maior needed to be eventually married by confarreatio himself, a requirement which Marc Antony was unable to meet at first. After Caesar's death the situation provoked malicious remarks by the anti-Caesarian fraction[5] and forced Caesar's political heir Octavian into action. But only after the successful peace negotiations at Brundisium in October 40 BC was Mark Antony able to inaugurate as flamen Divi Iulii at the request of the other two triumvirs,[6] because by then Antony's plebeian wife Fulvia had died and his new wife Octavia, sister of Octavian, had been lawfully wedded to him by confarreatio.

Due to the transient peace between Mark Antony and Octavian, Antony eventually lost his flaminical influence in the western part of the Roman empire in 33 BC and only maintained rule in the Hellenistic east, where his policies surely included the supervision of the Julian religion until his defeat in the battle of Actium 31 BC and subsequent death in Egypt in the following year. Whether the flaminical vacancy in western Rome was unofficially occupied by Octavian is unknown, but feasible, since he had always overseen parts of his divine father's cult in Rome.

After Antony's death the position of flamen Divi Iulii in the city of Rome was assumed by a Sextus Apuleius.[7] The date of his inauguration is unknown, but it must have been before the consecration of the Ara Pacis Augusteae in July 13 BC, because the southern frieze shows all four flamines maiores. The right dating might also be dependent on the correct identity of Apuleius. It was mostly assumed that the husband of Octavia maior and brother-in-law of Octavian, the quaestor and praetor urbanus Sextus Apuleius was meant here.[8] A strong case has however been made for his son Sextus Apuleius, who was augur and consul with Octavian in 29 BC.[9] This is a possible alternative, because Octavian may have followed his father's example in appointing an augur and fellow consul for this important office. In this case Apuleius could have inaugurated as early as 29 BC, directly following Mark Antony's death and accompanying the beginning of his consulship. Further evidence is the fact that he was of patrician rank after 29 BC.[10] Since the augur Apuleius was probably alive until after 8 BC, it is almost certainly he who is represented on the Ara Pacis Augustae, which was dedicated in 9 BC. The youthful features of the fourth flamen on the altar's southern frieze can be explained by the common Roman practice of choosing young men for the flaminates[11] and also function as further evidence for the augur Sextus Apuleius, as opposed to his father.

For urban Rome only one other flamen Divi Iulii is known, namely Lucius Iunius Silanus Torquatus,[12] who—like Apuleius—was also related to the imperial family. Silanus had been made patrician in AD 29 and was elected flamen under emperor Claudius, most probably about AD 41.[13] His official title is given as flamen Divi Iuli et Augusti, since the two offices of flamen Divi Iulii and flamen Divi Augusti were united some time after Augustus' death in AD 14, probably under Tiberius and not before the year AD 29, because a man called Nero Iulius Caesar is known as flamen Augustalis (probably by AD 26–29), which could be evidence that the two flaminates were still separated at that time. A case was made to identify the flamen Silanus with Decimus Iunius Silanus Torquatus, consul of AD 53, but this is improbable.[14]

Pilleus (with apex) of
a flamen Divi Iulii[15]
© Trustees of the Brit. Museum
(Used by permission)

The sources on the municipal and colonial flamines of Divus Iulius are more yielding:[16] here too the priests were distinguished Roman citizens. Imperial priests played an important role in local politics and religion, supporting the dynamics of the cult. They were usually from the local élite, i.e. often the most prominent citizens of the region,[17] "a status recognized by their privileged position in the assembly, and as eponymous officials."[18] It shows that the flaminate and the cult of Divus Iulius were quickly spread in the entire empire after Caesar's death, especially in the Caesarian and Augustan colonies like Ephesus, Corinth, Nicaea, Caesarea Maritima and elsewhere.

However, especially for the eastern parts of the empire it has to be noted that the Roman imperial cults were modeled on the dominant Greek culture, creating a strongly Hellenistic ritual character and including Roman elements only on the liturgical periphery. The coupling with other cults remained popular, in the case of Divus Iulius possibly i.a. the Dionysian[19] and Serapian[20] variations, probably including Apollonian syncretisms, as well as parallel cults like that of Aphrodite as a Hellenistic substitute for Caesar's divine mother Venus Genetrix, e.g. in Corinth. A general cultural and religious overlay must be assumed especially for the colonial peripheral regions. Accordingly, evidence for true flamines has only been found for the Roman colonies, e.g. the relief showing a base in honor of a flamen Divi Iulii from Alexandria Troas, carrying the pilleus with the standard flaminical apex. Whether the colonial and municipal flamines had the same privileges as a Roman flamen is unknown.

Listed are the known titles of municipal priests of Divus Iulius in Italy from inscriptional sources.[21]

Divus Iulius and the fratres Arvales