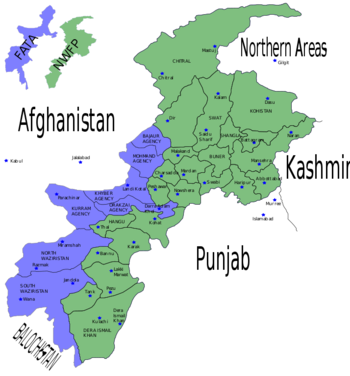 Along Pakistan's border with Afghanistan Pakistan exercises a measure of authority over Pakistan's Tribal Agencies.[1] an unique administrative and political status from the British colonial rule in 1849. They were demarcated, in 1893, from Afghanistan by the Durand Line. Governance is by federal Political Agents and tribal elders, "while leaving the people with their traditions and internal independence. "[2]

According to the Pakistani government, the FATA contain about a dozen major tribes with several smaller tribes and sub-tribes. Utmankhel, Mohmand, Tarkani and Safi are the major tribes living in Bajaur and Mohmand. Afridi, Shilmani, Shinwari, Mulagori Orakzai are settled in Khyber and Orakzai while the FRs of Peshawar and Kohat are occupied by Afridi. A good mix of Turi, Bangash, and Masozai inhabit Kurram Agency. Major tribes of North and South Waziristan are Darwesh Khel Wazirs with a pocket of Mahsuds in the central part of the region. Other tribes of the region are Utmanzai, Ahmadzai Dawar, Saidgai, Kharasin and Gurbaz. Bhittani occupies FR Lakki and Tank, while FR Bannu is Wazir. Ustrana and Shirani tribes live in FR D.I. Khan.[3]

Some of the tribes are Pashtun -- the same ethnic group that was the Taliban's power base in Afghanistan.[1]

The FATA have not had the same priority for economic development as has the rest of Pakistan. Efforts were concentrated around sectoral facilities and benefiting few influential and politically active sections. "This ad hoc approach deprived large segments of the population from social uplift, and economic empowerment."[2] Lack of economic development has contributed to political isolation.

Ijaz Khan, a professor at the University of Peshawar, finds a fundamental incompatibility in the government position. Unless terrorism is eliminated rather than contained, the latter, in his opinion, the government position, economic development cannot be secured. Second, the programs do not reflect "the FATA’s evolving socio-economic landscape and power structure".[4]

David Kilcullen describes the FATA as the "ancestral home of the Accidental Guerrilla".[5] He credits Barrett Rubin with the observation that to think of "Afghanistan and Pakistan as separate countries divided by an international border, or to conceive of Pakistani Taliban in Afghanistan, or Afghans in Pakistan, as foreign fighters is to fundamentally misunderstand the mental geography of the Pashtun nation." The countries are divided by the Durand Line, which was shaped by geographic features and British convenience, not the critical tribal and ethnic borders.

Among the major actors have been the Taliban faction under Mullah Omar, former Soviet-era groups who trace their origin to the Soviet occupation of Afghanistan (i.e., Hezb-e-Islami under Gulbuddin Hekmatyar and the Haqqani Network founded by Jalaluddin Haqqani‎), al-Qaeda, and indigenous Sunni militants. [6] The Jamiat-ul-Ulama-i-Islam‎ (JUI), while at times banned, does participate in national politics.

Still, according to Kilcullen, al-Qaeda and its predecessors have had a presence in the area for almost 30 years. The Western concept of al-Qaeda leadership hiding in caves there does not match reality; "If bin Laden is actually in the FATA, this is by choice rather than necessity; he is not hiding but veiled, cocooned in a protected network of local allies and trusted relationships." Al-Qaeda, Taliban, Chechen, Uzbek, Uighur and other fighters have intermarried, formed local alliances, provided charities, and, in many cases, displaced the classical tribal governance and the Pakistani political agents. This, he writes, is "absolutely typical of the infection phase of the accidental guerrilla syndrome," in which a "wound" in governance structures allowed initial entry of extremists. The extremists eventually integrated into the society. FATA tribal fighters, affiliated with the outsiders, now dress distinctively, drive recent vehicles, and have Arab or other foreign "minders". They threaten Pakistani and American assistance teams.

Baitullah Mehsud, who probably was killed by a drone strike in August 2009, was associated with a new generation of leadership, more Islamic and less tribal.[7]

C. Christine Fair observed that Pakistan "benefited from FATA being a 'black hole' from which it could launch operations into Afghanistan and train militants operating in Afghanistan, Kashmir, and the rest of India." The Pakistani government also has banned secular political parties from operating there, but has not stopped religious parties from working from mosques and madrassahs. [8]

There are increasing tensions between outside militants, the main FATA population, and militant residents. The government of Pakistan, however, has not yet adopted a counterinsurgency method that integrates political, economic and military measures. [9]

Dealing with the problem is challenging because it involves tribal, national, religious and transnational issues. The Pakistani government remembers the breakaway, in 1971, of what was then East Pakistan and is now Bangladesh. There remains a sovereignty issue, between India and Pakistan, about Kashmir. Pakistan, therefore, is sensitive to any possible separatist movements, and sees a FATA dominated by outside militants as such a situation.[10]

There is considerable controversy over whether the targeted killing, by missiles fired from drones, is a net benefit.[11] While killing key leaders clearly disrupts, [12] it is an open issue if the associated civilian casualties make the attacks a net benefit.

Counterinsurgency strategists, who think in population-centric rather than enemy-centric terms, are looking at strengthening the Pakistani security forces to operate in a more effective way. This hardly represents a consensus within the Pakistani government, when President Asif Ali Zardari said, in May 2009, Pakistan needed to develop its capabilities and required more military aid,[13]. Also in May, Pakistani Army Chief Ashfaq Parvez Kiyani said "[E]xcept for very specialized weapons and equipment and [advanced] technology, no generalized foreign training is required," [14] and outside input would be counterproductive.

This is a major conflict for U.S. policymakers. C. Christine Fair of the RAND Corporation said "Pakistan's army does not want to become a counterinsurgency force." [15] There have been paramilitary units, the Frontier Corps and the Rangers, which report to the Interior Ministry, have been of questionable effectiveness.

The Army, according to Kilcullen, remains enemy-, not population-focused. Operations of both the Army and Frontier Corps have been of battalion or larger size, too large for effective patrolling or surprise. They are primarily deployed in static defensive positions, partially because they lack helicopters and mine-protected vehicles. Lacking effective ground mobility, they overuse air and artillery strikes. Regular Army units discount local units, from Frontier Corps down to traditional Pashtun local units.[16]