In physics, in particular in the theory of electromagnetism, Faraday's law of induction states that a change in magnetic flux generates an electromotive force (EMF, voltage difference). The law is named after the English scientist Michael Faraday, who discovered in 1831 on basis of observations that a change in a magnetic field induces an electric current. This is the phenomenon of electromagnetic induction.

Some thirty years after Faraday's discovery, between 1861 and 1864, the Scottish mathematical physicist James Clerk Maxwell formulated the mathematical expression relating the change in magnetic flux to the induced EMF. This relationship, known as Faraday's law of induction (to distinguish it from Faraday's laws of electrolysis), states that the EMF induced in a circuit is proportional to the rate of decrease of the magnetic flux that cuts across the circuit. By Ohm's law an EMF induces an electric current in a conductor.

to the time derivative of the magnetic flux Φ. The law reads

where k = 1 for SI units and one over c (the speed of light) for Gaussian units. The EMF is defined as

where the electric field E is integrated around a closed path C. The magnetic flux Φ through a surface S that has C as boundary is defined as the surface integral,

where dS is a vector normal (perpendicular) to the infinitesimal surface element dS and dS is of length dS. The dot stands for the inner product between the magnetic induction B and dS.

If, in the definition of the EMF, C is a conducting loop, then under influence of the EMF a current iind will run through it. The minus sign in Faraday's law has the consequence that the magnetic field generated by iind opposes the change in Φ; this phenomenon is known as Lenz' law.

If the surface S is constant in size and direction, a change in Φ is solely due to a change in B.

The magnetic flux can be varied by changing the angle between the field and surface. For the simple case of a planar loop bordering a constant area A, and a homogeneous field B of strength B, the flux is given by

When α(t) becomes a function of time by rotation of the loop, Faraday's law shows that an EMF is induced of the form,

When the rotation is uniform, i.e., α(t) linear in time t, it follows that the EMF has a sine dependence on time and an alternating current will be induced. 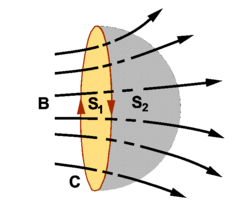 The flux through two surfaces that together form a closed surface is equal because of Gauss' law. Indeed, in the figure on the right the surfaces S1 and S2, which have the boundary C in common, form together a closed surface. Hence Gauss' law states that

where the minus sign of the first term is due to the fact that the flux is into the volume enveloped by the two surfaces. It follows that

and that the magnetic flux Φ can be computed with respect to any surface that has C as boundary.

where S is a surface that has C as boundary. From rewriting Faraday's law as follows,

and the fact that S is arbitrary, we may conclude

which is one of Maxwell's equations. Recall that k = 1 for SI units and k = 1/c for Gaussian units. 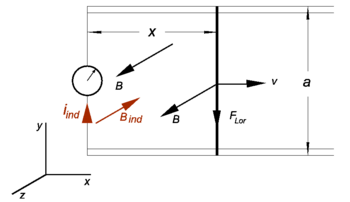 CC Image
Conducting bar moves to the right on conducting rails in homogeneous field B. Surface grows with v. Lorentz force is downward and gives an electric current iind in clockwise direction around the closed circuit.

It is instructive to derive Faraday's law from the Lorentz force for a special case. To that end an experimental setup is depicted in the figure on the right. A conducting bar of length a moves in positive x direction over two parallel pairs of conducting rails. The speed v of the bar is constant. The whole setup is placed in a homogeneous magnetic field B = μ0 H (we are using SI units) that points toward the reader, i.e., in positive z-direction. Homogeneity means that everywhere in the plane of drawing a magnetic field B of the same strength points toward the reader (parallel to the z-axis).

The magnetic field is constant, but the surface S increases linearly in time

The vector B points in positive z-direction and so does the normal to S,

The Lorentz force (in SI units) is the cross product,

where ey is a unit vector along the y-axis. In order to obtain the electromotive force (EMF) one must integrate the inner product of electric force with path, FLor⋅dl, counter-clockwise around the circuit consisting of: the moving bar, the two pairs of unmoving rails and the unmoving conductor containing the ampmeter. The integration is counter-clockwise because of the right-hand screw rule applied to the direction of B. Except for the moving bar, where the force is constant and non-zero, there is no force in the circuit. The constant force acts over the length a of the moving bar and gives an EMF equal to force times path length,

which indeed is Faraday's law of magnetic induction.

The EMF gives a current iind in the direction of the Lorentz force, i.e., in a clockwise direction in the plane of drawing (the x-y plane). By Biot-Savart's law a current gives a circular magnetic field. The current iind has a tangent vector in the x-y plane that is in negative z-direction. Hence Bind opposes B, in accordance with Lenz' law.