The FIM-92 Stinger is a U.S.-designed, second-generation surface-to-air missile. It is a man-portable air defense system (MANPADS), which means it can be carried and fired by one person. 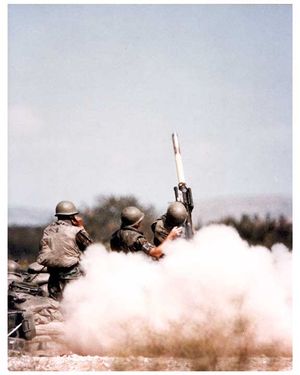 Portable Stinger launch
There are also two vehicles, one armored and one not, equipped to carry and fire eight missiles. Stingers have been modified to serve as air-to-air missiles on helicopters such as the OH-64 Kiowa Warrior, typically to attack other helicopters rather than high-performance aircraft. The missile proper, made by Raytheon, has a range of 8 km and a maximum speed of Mach 2.2.

Its onboard guidance has gone through two generations of improvement, and uses combined infrared and heat-seeking guidance. It can also be linked into the Forward Area Air Defense (FAAD) network, so a Stinger can be fired at a target not visible to the launcher crew, but, for example, being tracked by an airborne radar and coming at the launcher.

In U.S. service, the Stinger replaced the FIM-43 Redeye first-generation MANPADS. Originally, the replacement was to be known as the Redeye II, but the eventual design was sufficiently changed that a new name seemed appropriate. There are several differences, but the most important is that the Stinger has "all-aspect" capability.

While both missiles start out heat-seeking, the Redeye had to lock onto the hottest part of an aircraft, the engine exhaust, with the sometimes unfortunate consequence that a soldier could fire at a hostile aircraft only after it passed him, possibly having dropped bombs or fired before the Redeye could be used. While it is still difficult to react quickly to a high-speed aircraft at low altitude, a soldier with a Stinger has a chance of hitting an enemy before the enemy comes into range to use his own weapons.

The Stinger is not heat-seeking alone, but also has ultraviolet sensitivity in its sensors.

Stinger missiles arguably are iconic for the Afghanistan War (1978-92). When the U.S. provided them to the Afghan insurgents, who had been hurt heavily by Soviet armed helicopters, it completely changed the course of the war. Guerrillas routinely shot down helicopters and some higher-performance aircraft, and helicopters no longer could attack guerrillas with impunity.

Several ground vehicles, operated by air defense artillery personnel, are armed with multiple Stinger launchers and sometimes aiming assistance, such as the U.S. Army Avenger vehicle, which mounts a pair of four-round Stinger launchers, and a .50 caliber machine gun, on a M998 HMMWV chassis. The M6 Linebacker version is functionally the same, but is built on a modified M2 Bradley armored infantry fighting vehicle chassis. 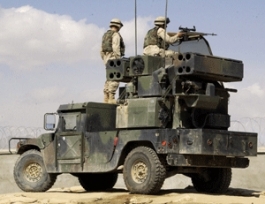 The machine gun has two purposes: local defense against threats on the ground, and aircraft, typically helicopters, that are too close to engage with a missile.

The Laser Avenger has, in addition to the missiles and machine gun, a 1kW laser. The laser is intended to allow Improvised Explosive Devices (IEDs) and unexploded ordnance (UXO). This was successfully tested in 2007.

In the current Avenger and Linebacker, a more advanced sight allows the gunner to fire all the missiles. Once the gunner enables the sight and presses the "lock on target" control, the information is passed electronically to the selected missile, which cues the missile in the appropriate azimuth, "leading" the target by pointing the missile at the point where the target will be when the missile arrives. [1]

The fire control system lets the gunner see the target either through visual-range optics, or a Raytheon AN/VLR-1 Avenger FLIR forward-looking infrared viewing device. The FLIR thermal viewer, usable at night and in bad weather, has three fields of view: wide, narrow and a rain mode.

In addition to the sight, the Avenger has a laser rangefinder that gives the missile the information for optimal azimuth and elevation when fired. To avoid fratricide, the vehicle has am AN/PPX-3B Identification friend or foe (IFF) system.

These can be operated on the vehicle, or from a Remote Control Unit that can be used up to 50 meters away from the launcher. The RCU protects the crew from counterfire directed at the launcher.

FAAD interconnects Avenger and Linebacker missile launchers, Army/Marine AN/MPQ-64 Sentinel ground radar, airborne radar (including the E-3 Sentry) and command centers, to allow Stinger vehicles to take on targets outside visible range, but located by a remote radar. [2] FAAD also controls non-line of sight anti-tank missiles. When SLAMRAAM is deployed outside the Washington, D.C. area, it will be FAAD compatible.